“Bad Santa 2” star, Kathy Bates like you’ve never seen her – and she loved every minute of it 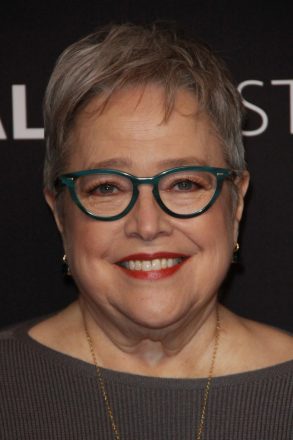 It has been 26 years since Kathy Bates won her Academy Award for her portrayal of Annie Wilkes in Misery and although Annie was shall we say a bit off her rocker, Bates plays a different kind of bad girl in Bad Santa 2.  While all her characters seem to be a bit eccentric in different ways, none have been quite like Sonny Soke, mother to Billy Bob Thorton’s Willie. Sport’n forearm tattoos, chugging beers and riding a Harley, Sonny might even make Annie Wilkes take a pause.

In our interview with the former off Broadway Tony Award winner. Bates shares what she loved about playing a biker chick 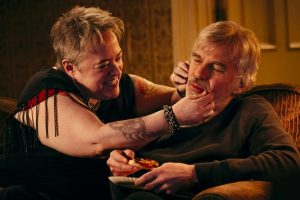 What was it like starring in this raunchy comedy?

Well, I had seen the first one. When they asked me, “Hey, do you want to play Billy Bob’s (Thornton, plays Willie Soke) mother?” I said, “Where do I sign?” Because I was such a fan, what can I say? I loved playing a biker chick, because I always wanted a motorcycle, I always wanted a Mohawk, I always wanted tattoos, I always wanted to do all of these crazy things and not give a you know what. I got to do it with this wonderful character.

Ever since your early years on stage, your characters have had a sense of  warmth. Now you’re the meanest biker we’ve ever seen. Can you talk about this woman and if she has any redeemable qualities at all?

You think this performance is going to damage that? I see her as someone who doesn’t trust anybody on the face of the Earth. I think that’s someone who’s come from a very rough background, not unlike what she inflicts on her son.  There’s a moment where her maternal instincts are stirred once they’ve ripped off the mansion together and are splitting the booty in the van.

There’s a moment I think where she feels the warmth and chewed up the caramel for him when he’s a baby, but then we’re reminded that she’s selfish and lives her life believing alcohol is a food group.

It was like Christina said, “I really wanted to play someone who jumps off the high board into the deep end and let it rip.” Since it’s a comedy, I don’t want to get too psychological about it. The main thing for me is being a fan of the first movie. I just wanted to hang out in the coffee shop and listen to these guys talk to each other. I just wanted to stay there with them. I wanted to make sure going in, I didn’t upset that chemistry. It’s like seeing a really wonderful painting and saying, “okay this part is for you, and you want the right tone and color.” All of that is beautiful. 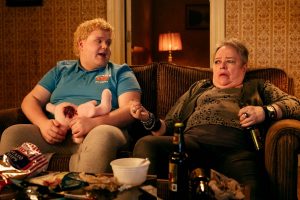 Would you have done something like this 20 years ago?

I’m really glad I have the craft to do it well. I would have been at sea a few years ago. I would’ve been too young to understand more about the world and about who I was playing. I’m not sure if you mean it would’ve affected my future career. Come on, we’re actors; we play all kinds of different parts. 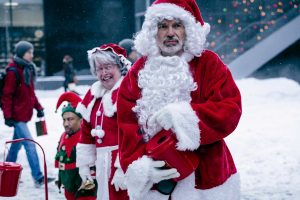 Can you shake off the character afterwards, and in order to insult each other did you have to know each other or was it just natural?

I learned an important lesson. Many years ago I played a woman who commits suicide, on Broadway. Coincidentally, my father had just tried to kill himself because he had diabetes and was facing an amputation. He was in his 80s. My mother found him in time and revived him while I was getting ready to do the play in fall. He went ahead with the amputation and I was helping him one day. I was giving him that BS that we give, “Come on dad, you got a lot to live for.” He was 83. He said, “You know how I feel, you’re doing that play out there.” So I took that experience with me into the play and as a result over an 11 month period of playing it on Broadway I had to stop.

It was a real crossroads for me as an actor, that if you want to be immersed, and be in the moment as Billy said. Realistically as a character you have to be natural to fulfill all of those demands, and I had to leave the play for a day or two. I realized you can’t be so screwed up and in something. My partner was a two-hander. I suddenly realized, “My mother has those glass shoes.” It said made in Tennessee so I felt like I was being Gas-lighted. I realized then that as much as I really can be that character and not feel any part of myself; you just have to be professional.

You can’t be an opera singer then cry and sing at the same time. I had to be professional and leave it at home; on the stage home, which is home for me. Some of the roles I played recently, like in American Horror Story where I’m doing something really horrendous I actually go through a ritual when I take my costume and makeup off. I visualize removing all of that negative energy. I find that really helps. It’s not me, it’s somebody else who wouldn’t make those choices or say those things. This is a comedy, but you asked, so that’s how I work. 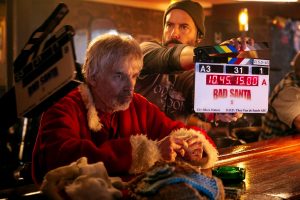 Did you and Billy create any history of your characters beyond what the movie-goers see to improve your performance / relationship with Billy’s character?

I think one day we were talking and agreed they were probably carney together. They were con artists and lived in that atmosphere, nothing against carneys. We probably figured that that’s where they’re from. I remember doing a movie with Dustin Hoffman. It was years and years ago. It wasn’t a big part, but it was a talking part. Gary Busey’s son was in it, Jake was 5. Gary said, “You want to take the knife? Think about it.” Jake came back the next day and said, “Yeah I’ll do it, I think acting is pretending and making believe like you’re not pretending.” I thought, “Well that’s it. Lee Strasberg, you can go home. That about says it all.”