“Battle of the Sexes” star, Steve Carrell prefers to rock the seventies fashion and not the boat 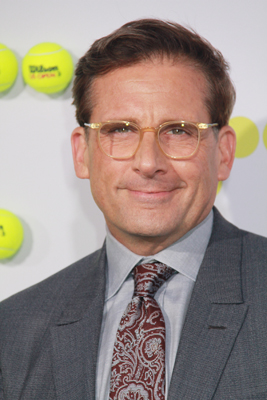 When someone mentions Steve Carrell you typically think of some hilarious comedy he has done, but in 2014 Carrell switched gears and received an Oscar nod after he took on the role of a complex wrestling coach in the true sports story, Foxcatcher.

We chat with Carrell about his role, what similarities he found between himself and the late tennis legend, and why some men feel they are superior athletes. 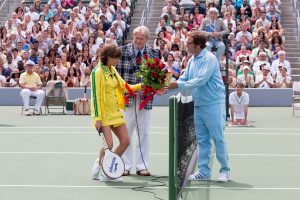 Q: Where does Bobby Riggs rank on the “fun to play” scale of the big parts that you’ve done?

He’s up there, because as Jonathan (Dayton, co-director) was saying, there’s that public persona, and then there’s this guy that no one really knew. And I remember watching, when I started doing research. There’s a great 60 minutes interview with him, and he’s doing his thing, he’s playing his character. It’s this spiel. But the conversation came around to his wife, and talking about how they’ve recently separated. And, “Oh, she’s better off without me,” and “She’s a great woman, the best. But I’m the…” you know. But there was, even within all of that bravado and that crazy over the top nature of his, you could see this pain that he was suffering through. And to me that was sort of the root of what I was going for. There was this public thing, but even in his public persona you could see the pain and the sort of the complexity that was lying underneath it all. 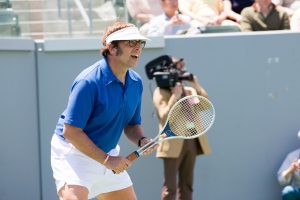 Q: Are you worried with this movie coming out that you are taking a step back on the hotness meter?

I appreciate this line of questioning. Well I will say that I read one review of this film that talked about how bad my wig was. And it’s my real hair [laughs]. So I grew out my hair and I grew these massive chops, and actually used the same. Because Bobby Riggs, he was such a self promoter. He, I think, wanted to get a deal with Clairol (hair color products). Because he always mentioned, “I use Clairol Number 87.” and I think he was trying to get Clairol to support him, you know, to sponsor him. He was always looking for an angle. So used the same color, which was kind of an orangy brown, and grew these side burns which he didn’t dye. So those were great. My hair was already brown. And then me and my wife and my kids went on vacation before we shot. And they didn’t want to be seen with me. And I have to say it did sort of affect my love life with my wife.

Q: Can you talk about channeling Bobby Riggs’ showmanship on the court? It seemed as though he was almost playing a character.

I think that’s a really accurate comparison. I saw it the same way. He created a character. He saw, I think he saw what was happening in the zeitgeist and decided to try to profit from it really. I don’t think, and correct me if I’m wrong. And who knows. I don’t think he really cared much about politics. I don’t think he had a foot in feminism or chauvinism. I think he just wanted to make some dough. And he wanted to promote himself, and he wanted to be famous. I think he had a chip on his shoulder. Because when he was a star, he didn’t get the money, he didn’t get the acclaim. It was in the late forties and tennis wasn’t a big deal. So by this point, he was in his mid fifties. He was playing on the senior circuit, and he just wanted to have his due. He also specifically took a page from Muhammad Ali. It’s the same sort of thing. It’s this bravado and this character, this creation. And I maintain that he just wasn’t that good an actor. And that was part of his charm. Because you could tell that all of these things that he was espousing weren’t connected to his heart. And I think that was part of his charm, that most people. I was eleven at the time, I knew it was a put on. And most people that I knew, knew it was a put on. And that was part of what was charming about it. Because he was benign. You could tell the guys who really were saying these things and meant them. Which is not to say that in saying them isn’t dangerous as well, even if you’re just joking around. Because other people who do believe that pick up the mantle and run with it. So there is danger in that. But I think he as a person was a benign self promoter.

Q: Why do you think some men share the thought process that women are inferior athletes?

Let me make the definitive statement on this [laughs]. I have no idea. I don’t know, I don’t know. I’m just an actor. I was just playing a guy. But it’s funny, through this you do get these questions which are these broad, intense, sort of life changing world questions. And I have no, I don’t know. I am just trying to get through today.

Battle of the Sexes is currently playing in theaters nationwide.

For more info, visit the film’s official website at