“Battle of the Sexes” star, Emma Stone shares how she muscled up to become a legend 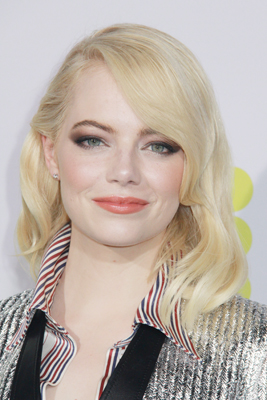 Taking on an autobiography role is never easy, especially when the character is a legendary athlete who made historic changes for women all while battling opponents on the court and life changing decisions off the court. Yet, Emma Stone aces her role as legendary tennis star, Billie Jean King in her new film Battle of the Sexes.

We chat with Stone on how she prepared for the roles, physically, mentally, and emotionally. 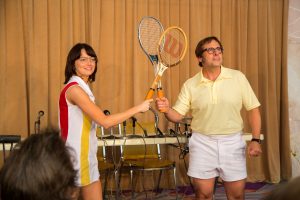 Q: The scene after the Battle of the Sexes and you are back in the locker room crying. How did you prepare to play that moment?

I was thinking about that moment in all other scenes of the film because she has such strength and because she holds it together and it’s all just right under the surface for most of the film. That sort of breaking point, you get to earn that moment of finally seeing everything that’s been happening under the surface the whole time because she was on four hours of sleep every night and all of this was going on with Marilyn (Barnett,  King’s lover, played by Andrea Riseborough) and with Larry (King, husband, played by Austin Tsowell). All of that, you can’t sit in the overwhelm of that and, in that moment, after winning, it was pivotal to me as an actor to know this is where we were building to. 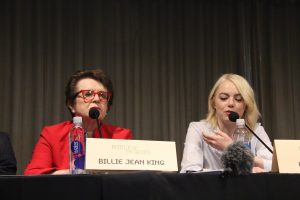 Q: You said you wanted to do right by Billie Jean King but you’re not a tennis pro. Was that the most difficult thing to make real for this movie? Is some of the action computer generated?

I had never played tennis. I’m not particularly good at tennis. I did a lot of lessons but I also had an incredible professional double named Kaitlyn Christian (former NCAA doubles champion), who was phenomenal and I had an amazing coach, Vince Spadea, and a great trainer that was bulking me up so I was surrounded by great people. And I had Billie Jean throwing balls at me and letting me mirror her and figure out all the details. I was surrounded by a team of massive support when it came to that element because so much of the story is about her personal journey and personal struggle but if this had been the Billie Jean tennis movie, I never would have gotten the part. I had such an incredible team. Jonathan (Dayton, co-director) and Val (Valerie Faris, co-director) made it possible. 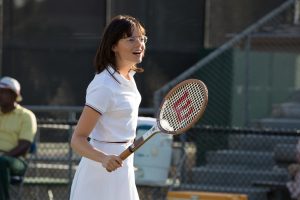 It was a big hurdle but we were also able very early on to realize where my strengths would be and what we could use and where we could move to that would actually seem, for a novice tennis player to become number one in the world in three months. (We considered) how can we make this work with a wooden racquet? So early on we could gauge these shots would be like this or we’re going to learn the choreography of this. They can do a lot now (with CG); there’s a lot of magic out there. You’ve seen these superhero movies. So, we kind of figured out as we were going the choreography of it and that made it possible. 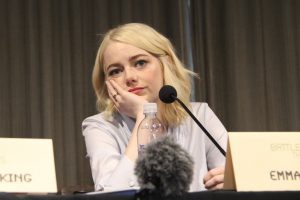 Q: Billie Jean King created some historic changes for female tennis athletes in terms of pay equality. Are you up for collaborating with her on pay equality for actresses?

[smiling] We can talk about it privately, and go to the media later.

Q: I heard that you put on some muscle for this part. How did that affect you and your body and performance?

It was amazing. I’d never played an athlete before and I’d never been athletic before, really. I had danced obviously (in La La Land) and things like that and that’s athletic but in a different way than a weightlifting tennis player. So, the beginning of the process was pretty brutal but then you get into a place that’s so amazing and you start to understand the mind of someone who is strong enough to execute whatever it is they want to execute. I want to put the ball over there, I can do it. I have the strength. I want to lift this up, I can do it. 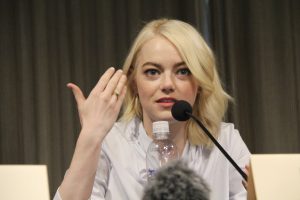 I remember  that I was getting food for my dogs and the bag was like 60 pounds and I was like (lifting) “I got it.” It was the most empowering feeling I thought Billie Jean is a social activist. She was always wired for social change from a young age when everyone was white, the gloves were white the balls were white, everything and she realized that from the very beginning but she also realized she was great at tennis and this was going to be an amazing platform for her. She could be the best to change the world. So, physicality is everything we do with that. If you have the strength to be the best in tennis, you can change the world so that was an amazing place to get to; to understand that physical strength equals strength out in our country or in the conversation to further equality. I know that sounds a little crazy for me to say that, but I did start to put those pieces together and it was super empowering. It felt so good.

Battle of the Sexes is currently playing in theaters nationwide.

For more info, visit the film’s official website at