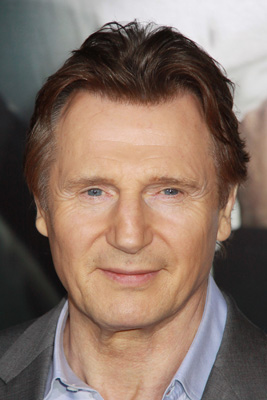 Watching the trailer for Mark Felt – The Man Who Brought Down The White House, it feels a little like we have gone full circle in politics alas James Comey and Donald Trump; and that is just one of the things that make this movie so intriguing. The second is Liam Neeson and his portrayal of the infamous whistle blower, FBI Special Agent, Mark Felt. Neeson brings the professional and personal struggles Felt went through as the Agent (who eventually becomes the Assistant Director of the FBI), a husband, and father.  We chat with Neeson on how the team behind the scenes physically transformed him into Mark Felt, how little he knew about the Watergate scandal and if he feels there is any similarities with the current White House administration. 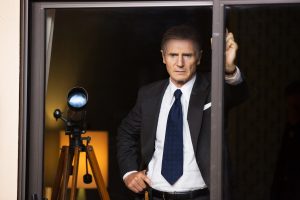 Q: How informed were you on the Watergate scandal and how did you get informed before you began shooting the film?

Well for a start I knew very, very little about Watergate. I was brought up in the north of Ireland and in 1971, 1972 we were going through our own hellish troubles political upheaval. So, I was I was very aware of Watergate on the periphery of my imagination. We had two TV channels, BBC and ITV and after the local news, I remember seeing images of horrible images of the Vietnam War coming through and also something about Watergate not quite knowing what it was. So, when Peter Landesman (Director, Writer) approached me to be in this it was a whole new learning curve for me and I was staggered at just how immense Watergate was. Just extraordinary it was. this extraordinary work that the FBI did for a start. And these two neophyte journalists you know, Woodward (Bob Woodward, journalist) and Bernstein (Carl Bernstein, journalist). Gradually covering this exposé of this criminality with the highest order. Does that answer your question? I’m not sure if it did. Oh, I don’t know if…I know there’s stuff written by them but actually there’s very little by them. You know? I employ a research assistant. There’s stuff now on YouTube. It’s amazing. You know you punch in Watergate and there’s a whole thing of interviews with G. Gordon Liddy (part of the Nixon’s administration “Plumbers”) with E. Howard Hunt (part of the Nixon’s administration “Plumbers”) and then suddenly there’s something with Mark Felt. So, I relied on that stuff a lot, you know. 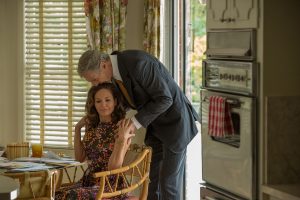 Q: It wasn’t until the internet really took off that most people had any idea what the real Mark Felt actually looked like or sounded like, or actually anything personal about him. That being said, why was physically capturing the real man so critical?

Well at the end of the day, I wanted to represent what Peter Landesman had written. That character. And yes, there’s any of my research today I talked about. There is very, very little known about Mark’s relationship with his wife, with his daughter. I mean he’s devoted too. That she had gone off to join a commune. Interesting enough Bob Woodward knew nothing of that aspect of his friend. So, it just shows you how much Mark Felt was able to compartmentalize his life and he was trained to do that of course by Hoover (J. Edgar Hoover, FBI director) thirty years in the FBI. That’s what they do. And the interviews I saw with him was you thought you could see the man but there was always a screen there. As an actor, I find that interesting. You know, there’s lots of scenes of walking down corridors and talking on telephones and talking to other guys in suits. It’s presenting that and trying to keep an audience interested at the same time. These are bureaucrats. So, we shot a lot more stuff with Diane (Lane, played Audrey ), who played my wife. A lot more stuff. There’s maybe not maybe on the DVD director’s cut. I don’t know. I feel sad and a little bit. We’ve lost some of that stuff for audiences. But because as diversity as he was to the FBI he was totally devoted to her too. And she committed suicide after the whole stress and she shot herself with his service revolver. We don’t put it on the last credits. But she was under enormous strain. Very, very sad. 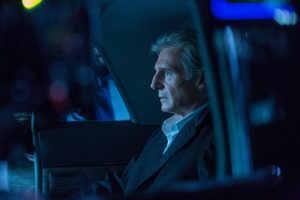 Q: There are a few moments in the film where Mark is suffering as a father. Can you elaborate on that?

Yeah. Like I say when these guys are in their office they have a screen over themselves. I think it’s true. Policemen and people in the military always have to keep their emotions in check because otherwise they wouldn’t be able to do their job. Fighting wars, arresting people, spy on people, FBI & CIA stuff that’s a lot of it’s very, very covert and I think they’ve been trained. Learned sometimes at great cost to their family life. To keep all this emotion in check. But, they’re still beating hearts. You know what I mean? They’re still human beings and I hope our film sort of shows a bit of both sides. 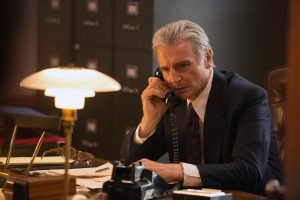 Q: How do you feel Mark Felt would be viewed today?

Well. You know there is the argument of who’s the guy that leaked all the information? He’s in Russia at the moment. Snowden (Edward Snowden). I mean there’s a classic. I mean, what is he a traitor? Is he a hero? What do you know? Certainly, the interviews I’ve seen of him in the past it’s like there’s a legitimate argument for both. But he seems to have seriously thought the public has to see what the government’s doing. I’ve been spied on and whatnot. The freedom of the press is tantamount to a free society. They have to be able to do their job and I’m not talking about gossip columnists and all that’s bullshit. But the real issues. To hold our elected leaders accountable. 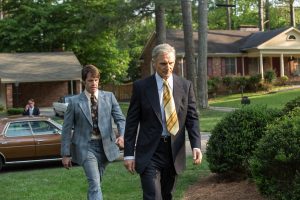 Q: Do you think there is a particular lesson from this generation? Can they take anything away from this film?

If anything, I would say if you’re a citizen of the country you have a right to protest. I’m not going to attack the Trump administration but the guy has to be given his time and his cabinet have to be given this time. But, people are protesting especially women. Which is great. It’s great to see America protesting again. That’s doesn’t seem to have happened for many, many years. And it’s like yes. Get in there. Get on the streets and make your voice heard. You have a right to protest. And it’s great, certainly with the woman’s movement. 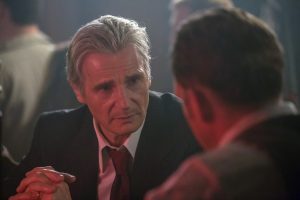 Q: Why do you think it’s good to protest again?

Because I think there’s the potential of legitimate wrongs being committed. As one political analyst, I saw a few weeks ago was asked do you think that there was collusion between Russia and the Trump administration in the early days? And he said well let’s put it this way is that there’s no smoke without fire and there’s a hell of a lot of smoke. These people have to be held accountable.

Mark Felt – The Man who Brought Down the White  is currently playing in theaters nationwide.