America finally gets to experience the dramatic talents of Jackie Chan in, “The Foreigner” 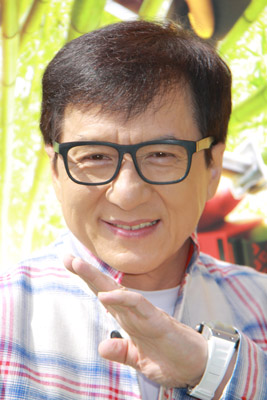 Since I am from Japan, I have had the opportunity to see Jackie Chan in several films showing off his dramatic acting skill, but until now America has missed out. We chat with Jackie on his latest role and if he feels his role will help reduce Hollywood’s unconscious discrimination of Asian actors. 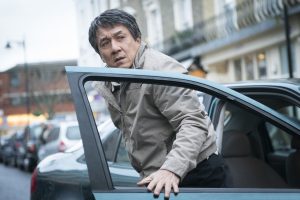 Q: I’ve followed you for years, even in other movies you have done dramatic roles, but this one is the best one yet. I was also equally impressed with the make-up effects for your character in this film. Was it weird to see yourself aging daily?

I found through this film, a few years later when I’m old what will happen to me [laughs]. I will have to walk slowly and quiet(ly)—a humble, old guy. I just remember every day with the makeup (I had to sit there) for 4-5 hours. The director said, “You don’t look old enough. I want you to look older.” (And then again and again), “Older. Older.” [He sighs with mock exasperation] I was like, “Oh, God.” It was non-stop. I’m glad that you said that you like it. (That means) I achieved my goal. That’s what I wanted for the future. I learned a lot of things (about) the character. He’s so good. He has a background that nobody (knows about). He doesn’t want to talk about it. He just pulls it inside. He’s quiet. Living in London (where) he has a restaurant. That’s all he wants. He wants (to live) peacefully (and) to have his own life. Then, a tragedy happens to his daughter. He just wants righteous. He asks the police, the government (for help). He’s just (has a) simple (goal). “Just give me the name (of the bomber),” that’s all. The whole movie is about him wanting to get the name. Otherwise, (the bad guys) will continue killing people. 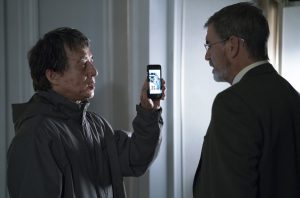 Q: What was your attraction to this project and role?

I have been planning my career for so long. As I look at the history, it’s the action star life. Look at Robert Redford right now, he’s still acting. I want to be an actor. The audience always treated me as a comedy action star. In Asia, I am already very tough. I started to change slowly for the last 20 years and my fans in Asia have accepted me as an actor and not an action star. But in Hollywood I receive so many scripts where I play a role as police from Hong Kong or police from China, secret police from Hong Kong and secret police from China. I watch so many American movies and I said that those roles are suitable for me, but why doesn’t anybody hire me to do those kinds of movies? I’m not saying La La Land but movies like La La Land, but why not me? A couple of years ago I suddenly got a call from my American manager and he told me about The Foreigner script. The screenwriter said that only Jackie Chan can play this role. Time had passed and I had been waiting for so many years and had so many things going on. I ended up waiting until two years later it all come together. I am so happy I got to it. 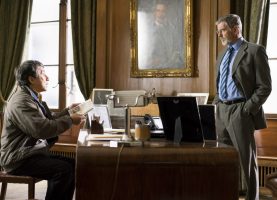 Q: How did you prepare for this role? Also, there are many people that have similar real-life experiences that you went through in this role (losing a family member in a bombing). What advice do you have for those people that have lost loved ones in this type of situation?

I think the only thing I prepared for was getting a dialogue couch to teach me English. Also, I have to understand Pierce Brosnan (played Liam Hennessy) when he speaks because he has a very different accent and I need to know when I speak my dialogue. On set, the director taught me a lot of things. He told me to move slower and reminded me that I am not Jackie Chan, I am Quan (role played by Jackie). Sometimes when I turned around and moved things, he would say “Jackie, too quick, you need to slow down.” I don’t know why he made me so old in this movie. Even the fighting, he would say, “No. Breathe. You have to breathe.” After I fight, I hit someone and then I needed to sound out of breath. 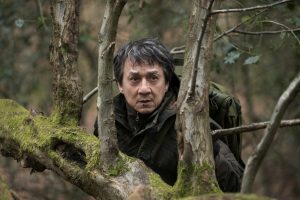 Why I chose this movie is because a few years ago, I need to make something correct. When I made Drunken Master, it was to tell people to drink and fight. That is wrong. Why did I tell people to drink and fight? I have to make Drunken Master 2 to correct myself and to tell people not to drink and not to fight. Through all of those years I have traveled and seen so many things I do not like. What should I do? I am the film maker. A couple of years ago, I saw in the Middle East there are so many wars going on. I made a movie called Dragon Blade and it’s about peace and unity. When I see the auction market and see so many things going on. I hope with my heart through the movie that all international treasures return to their own countries. In Angkor Wat I see beautiful half Buddha face gone missing. It’s in a museum and why doesn’t someone return it? It belongs to the whole world, it does not belong to one museum. I’m so happy that after the Chinese Zodiac I was finished, treasures were being returned back to China and I was so happy.

Right now, there are terrorist attacks every single day all around the world. I always said that natural disasters like hurricanes and tornadoes and tsunamis happen all the time. Why do humans create human disaster? I’m hoping that through the movie we can stop these kinds of things. Not killing innocent people every single day. It happens all around the world and we have to live with it.

Q: The Beyond Fest Film Festival (in L.A.) is showing Miracles – Mr. Canton and Lady Rose, which I understand is your favorite movie. Why is that film special to you?

At that time, I was so famous in Asia. Some director (said) “Jackie we only know about you in action movies. We don’t know some other things.” I was so angry. I said, “No, I’m a filmmaker. I want to show my directing skill.” So, I used Miracle, to do the best I can (with) camera movement. After I finished the movie, at the time, I used 90 million Hong Kong (money). That was a lot. In the old days, we would make movies for 5 million (or) 10 million, but I used 90 million to make Miracle. I spent 10 million Hong Kong (money) to buy Technovision, not Panavision. In one day, I hired the entire Hong Kong film (community) for one set. Nobody (else) had lighting guy anymore. I was the one hired them and who rented everything. I also promised my art-director, my cameraman, “I will make you the best lighting guy. You’ll get the Hong Kong Oscar. I want to make you the Best Actress.” That was my goal. I used the camera movements and everything. Seven days for one shot. And sometimes (I shot) for 16 hours for one shot. The movie came out and the box office was no good. Nobody got anything (at the Hong Kong Oscars.) That destroyed my ego.

If you make a good movie the result is that you get so many things; they come to you. You don’t have to fight them.

Q: You received Oscar’s Honorary Award. What does it mean to you?

When I heard (I was going to get the honorary) Oscar, I didn’t believe it. “Why me?” I’m just making cheap, action comedy movies. The Oscars (normally) go (to actors) like Tom Hanks, Robert DeNiro—these kinds of actors—(so) why me? After I asked the Chairman of the Oscar committee, why me, he said, “Because you do so many things. Not just acting. Before acting, you’ve done so many things—for animals, for charity. For 50 years, we’ve been looking (at) you.” Fifty people agreed for the first time (on the committee to bestow the award on Jackie Chan.) I asked, “Why did my name come up?” He said, “We’d been arguing about (other potential recipients).” But when they (suggested) Jackie Chan, 50 people raised their hand. I said, “Okaay.” Then I realized all those years, I never thought I could get anything. No matter (how) cheap (a) movie, or how expensive (a) movie, terrible movie, good movie, every movie I’ve made is like gambling. The Foreigner, I don’t know if it’s good or bad, or whether the audience would like it or not. Some movies you spend a lot of money on and “boom,” and some movies you spend little money on become big successes. You just don’t know. I just followed my dream to do the best I can. Every movie I make for the rest of my life I will do the best I can. When I have time, I do (some) charity—helping people, helping the young generation. I started the Jackie Chan Foundation. Then I started the Jackie Chan Training Center to train a lot of young talent. I never thought I would win something. Never. Today’s Oscar come to me. In the old days, I tried to come to Oscars for so many years. Then I gave up. Now, suddenly Oscars come to me. So this is why I tell my young children, “Do the best you can. Don’t aim for anything.” A few years later, maybe 10-20 years later, everything—the money, the fame, the rewards will come to you.”

The Foreigner  is currently playing in theaters nationwide.