Harrison Ford is back as Deckhard in “Blade Runner 2049” 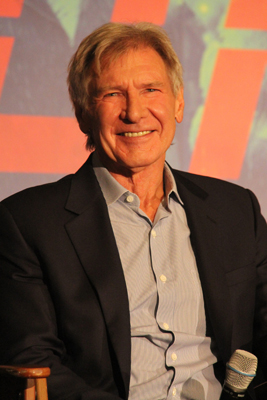 Sometimes it’s the little things in a film that stand out the most. For me, I loved that Blade Runner 2049 continued the original film’s integration of Japanese culture and language. One of the most memorable scenes in original for me is when Deckard (played by Harrison Ford) was ordering food at a “Japanese-ish” restaurant. He insisted the chef give him four toppings even though the chef insisted that two was enough. Now 35 years later, we see Ford as Deckard again in Blade Runner 2049. We chat with the Hollywood legend on how he feels he has changed , how he has aged, and what he brought to Deckhard the second time around.

Q: When you think back to the first Blade Runner, do you have vivid memories of filming it or considering it was 35 years ago, is it, is it not as vivid?

It was raining. [giggling] I was tired. I was happy with the, with the eventual, the long term eventual movie. A lot has happened since then but ah it was a remarkable experience working with Ridley (Scott, director) and Jordan Cronenweth (director of photography) and the rest of people involved and Hampton. Ah but ah it’s a long time ago in a world far far away. 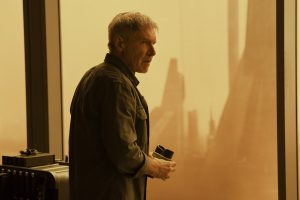 Q: This film and the first film, I feel stands out because they were both visually stunning. When you think back to what was accomplished 35 years ago it is just so impressive. As an actor, how important is that for you in getting into the character, in getting into the role that has that sort of visual impact there as far as sets and everything? And Secondly, is there another character that you played in the past that you’ve like to revisit?

Ahm, a picture is worth a thousand words and when you get on, on a set that’s a, there’s in a lot of thought put into the visual aspects of that scene, you feel a support from it. And a, and you know what you don’t have to do. You have to be there, of course, for the other characters and serves as a story but so much is done in a visual way. It certainly encourages your confidence. And a, the second part was, is there another role. Not that I can think of. 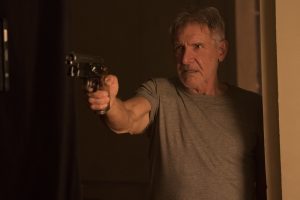 Q: Did the story have to be right for you to return as Deckard?

I was looking for an opportunity to extend the audiences understanding of the character. To be part of the telling of the story. It had to be my part. The whole had to be, something I really want to be involve in as well, not just my part. And I saw that potential. And I also, was anxious to work with people involved, it was Denis, was Ryan. So for me, it was a, it was a great opportunity.

Q: The characters are very complex, interesting. How was the process of, like a, developing the characters in terms of you?

There was a period of questioning, as any indicates. How much of the story to tell in this space? What the story was to tell about this, in that space between the last time you saw Deckard? And what condition we find him? And ah, I found it real pleasure to worked with Denis imagination and have him respect the process. And we ended up in place that I think, I hope, serve the film well. But I was also anxious to, ahm, nothing. That’s all I wanna say. Thank you. 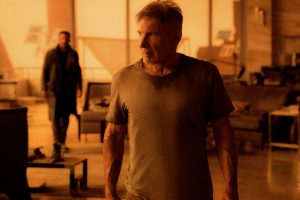 Q: Talking about the ending of the original Blade Runner. It’s like one of the all-time classic ending so I am curious of what you thought of the original ending? And how often had you thought about Deckard over these past 30 years, and where Deckard might be?

First of all, there were a variety of endings.

Q: I am talking about the elevator.

And it ended with Ridley’s final cut. And ah, I was much happier with that version. The one with the voice over and sailing into the sunset. And ah, I’ve thought about it frequently because I’ve been reminded of, of, of how, to reminded that’s how many filmmakers took inspiration from that film. And how much it defined ah, certain kind of visual storytelling. How strongly the effect of the film is, you know, been on our culture. And ah, and ah… many other things that were imagined might be part of the future. It’s a huge influence on our culture and my life.