Benedict Cumberbatch talks about being a dragon in “The Hobbit: The Desolation of Smaug” 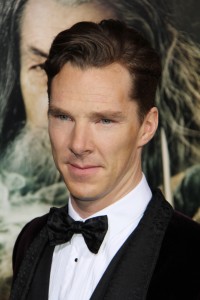 Benedict Cumberbatch, a.k.a. Sherlock Holmes in his hit TV show, had double duty in The Hobbit: The Desolation of Smaug. He talked about his experience being the giant dragon Smaug and doing voice over for the evil spirit the Necromancer. Also he and director Peter Jackson discussed Martin Freeman, who portrays Bilbo Baggins and also plays Dr. Watson opposite Cumberbatch.

The Hobbit series filmed in New Zealand, just as The Lord of the Rings series did. So even with just doing voice over and some motion capture acting, did Cumberbatch go to New Zealand or did he film his parts in London? 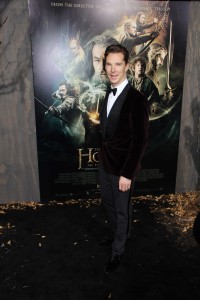 “I did go to New Zealand. It was hugely, hugely helpful. I started off with Peter and Fran (Walsh) and Philippa (Boyens), just the three of them and me, which was a privilege in itself, because of how large everything else is on this film, to have their sole attention. We were in the mo-cap stage so it began as a physicalization, both voice and face and body work, the whole thing. So that’s how I discovered him.”

When he was young, his dad read the book to him as a bedtime treat, Cumberbatch said. “That was my first bit of research.” As for other research, he went to the reptile house at the London Zoo and had a look there. Plus, he praised the illustrations in countless editions of the book. But acting as a dragon still had to be a great challenge, especially since it’s such a different shape from the human form.

“It’s obviously more abstract. It’s only going to be an impression of something that’s a serpentine reptile who can breathe fire and fly. And because I’m a limited biped mammal — sorry about that. But Peter knew that when I auditioned. So we worked with my sort of negatives and tried to turn them into positives. But one of the ways I did it was trying to squeeze my legs together, just forgetting the fact that they were legs, just trying to feel that as an elongated body crawling on the floor with my elbows and using my hands as claws and over-articulating my neck and shoulder to the delight of any physio who was unlucky enough to try to heal me afterwards — just throwing myself at it with a kind of kid-like imagination and their brilliant, expert guidance. It was a really fun way to work.” 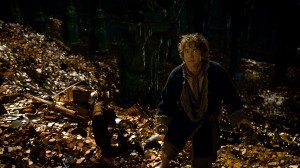 Since Cumberbatch is a veteran of working with Martin Freeman, how did he see the experience of going from buddies on their TV show to enemies on the big screen? And how does he describe his colleague?

“It’s a very different dynamic, very different. One, I’m in the room with him and I’m not the flying, psychotic napalm machine. I could be dismissive of him as Dr. Watson as my Sherlock, but they’re friends. What to like about Martin Freeman? He’s very smart and he’s one of the funniest men I’ve ever met. He’s a craftsman. He works incredibly hard and creates authentic characters and moments in drama. He’s an inspiration to work with obviously and I’ve got nothing but good things to say about Martin.”

Peter Jackson, the director of The Hobbit: The Desolation of Smaug, jumped in and asked Cumberbatch a question.

“The one thing about Martin that I think is amazing is he gives you choices. What that means is that every single take he does is different. Is that the same with Sherlock as well?” 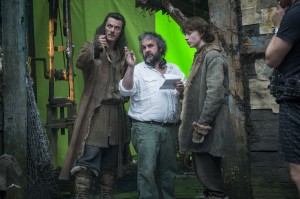 “It is,” Cumberbatch replied. And then Jackson continued:

“He’s just exploring. He’s exploring the whole time. He’s not saying, ‘Okay, I think that one was perfect. I don’t need to go any more than that.’ The next take he’s coming up with a different approach to it, and sometimes a very relatively different approach. Ten years ago, after we wrapped on The Lord of the Rings shoot with Ian Holm, who obviously plays Bilbo as an older man, Ian McKellen came up to me and said, ‘Are you okay with what he does?’ I said, ‘Why?’ Ian McKellen is much more of an actor who has a vision for what the scene needs to be about. He’s moving towards that particular goal, and Ian Holm was exploring and experimenting. I said, ‘You both have great approaches. You’re the safe and stable one. I know where you’re heading.’ And I’m getting a lot of choice with Martin playing the younger Bilbo, coincidentally who is exactly the same style actor as Ian Holm.”