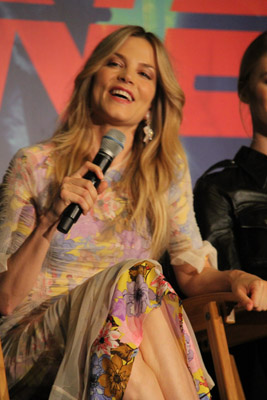 When Sylvia Hoeks entered the press conference room, I almost did not recognize her as the actress who plays Luv in Blade Runner 2049 because she looked completely different. While the character Luv was an icy female badass with dark hair and dominant attire. Sylvia however arrived in a colorful chiffon dress, blond hair, with a soft spoken tone. We chat with the actress on her stunning transformation and how she found herself playing this character in this legendary film setting. 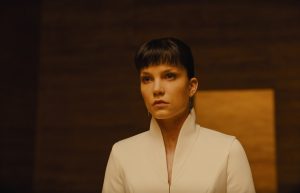 Q: There are a lot of sides to your character. Did  you ever think you’d have the opportunity to play such a  multi-faceted character?

No. I was astonished when I read the script and I saw this rich pallet that I could play with. I felt very grateful. I remember just having so much fun, preparing and thinking you know, these are all the possibilities. What can I do with her? Where can we go in this journey. I felt, you know, I felt very happy. It was the most fun character I’ve ever played. 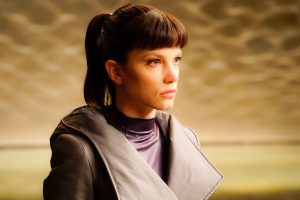 Q: What were some of  your first reactions when you walked on the sets?

I think, if I can say something about the sets. The sets, for all of those were very overwhelming. Like I remember we used to talk about it a little bit. Before we went on a new set, we ask you know, the other person, what do you think this next set will look like? And every time it was so overwhelming. It was something that you didn’t, you wouldn’t expect. And even like the extras that were in the sets and you are like, “what?”. You felt like your own mind was such a you know, a cliché of you know, your own fantasy were so cliché in a sense. And yeah, I think for me it was very important to understand this new Blade Runner universe. This new language that we were speaking. You know, being able to understand what Roger (Deakins, director of photography) and Denis (Villeneuve, director) had created and, and, and, and be able to add on to that as an actor. It was very important to all of us, I think.

Q: What did you enjoy most about playing her? And are there parts of her character that you can relate to in your life?

Denis always says, “you remind her of Audrey Hepburn on acid.” And that is the thing, it was so much fun to play her. And I think, I did a lot of training for it so. The day after I heard I got the part and I called a wonderful friend that trains with, is a, she’s a world champion triathlete, Lesley Paterson. This muscular but tiny piece of dynamite that just got me through every single day of training, 6 hours a day, 6 days a week. On Sundays, I would be on the couch, heat packs, ice packs everywhere. Not being able to move. But it, it, it paid off. I mean, I gained those pounds of muscle and I really felt that I met the character while going through that pain and that discipline. And, and, and it was lovely to meet her actually. The whole world opened up to me. And yeah, there was, there was so many things to play with you know, you could. There was satire, there was humor, she’s like a fashionista. She is ahm, a vulnerable. She wants approval, like a daughter to a father. She’s like a kid, you know, in a grown up world. And a, trying to control everything, trying to be perfect. And that was just something we can all relate to in this world, I think. You know, with all the social media around us. And ahm, I love to take that on.