Blake Lively: “My boobs are huge and awesome.” 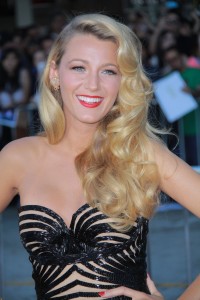 Welcome back, Blake Lively. It’s been a couple years since we’ve seen her on TV or the big screen, and while she was away she became a mother. Blake talks about why THE AGE OF ADALINE is her comeback project, and discusses how becoming a mom–and aging a bit–have changed her life. 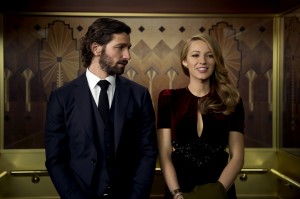 Why did THE AGE OF ADALINE draw you back into acting?

After I wrapped GOSSIP GIRL, I took about a year off because I was just tired. We worked 10 months a year, 16, 18 hours per a day. It was really for practical reasons. I just wanted a break and I wanted a restart, and I read a bunch of scripts and there were a few movies I saw that I liked and I thought “Oh, I could do this movie.” But this is the first one that I saw and I thought, “I can’t do this movie.” I love this movie so much, and the only reason that I wouldn’t want to do this movie is because I want to see it as an audience member and I wouldn’t want to ruin it by being in it. That was the only conflict I had, and so I talked my way into it. 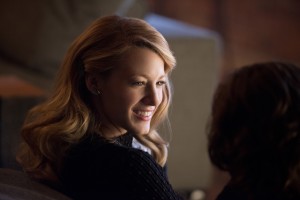 What are your thoughts about aging? Is it scary or worth celebrating?

I think people worry about mortality. Aging is something that society puts on you, and it’s more of an aesthetic thing. It’s something other people are worried about, like, “Oh, you’re looking older,” but I don’t think people sit at home and think, “Oh, I’m going to age slightly.” When you’re worried that your hand looks a little older, or the crease in your eye, it’s because it’s innately and instinctively related to mortality. This is something that’s learned, socially. I think that if you take away any of that superficial element, it’s sad to not age. She’s losing the people that she loves. Who cares if you can zip up your dress forever and you don’t have to put on eye cream? Your daughter is 80 years old and she’s about to pass on and you’re stuck in this forever. I think it’s a lot more at the heart of what aging means. 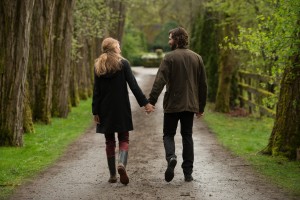 Has making this movie impacted your thoughts on becoming a mother?

No, I was just kind of nauseous while I was pregnant. So it impacted my thoughts of ,“Dear God, I can’t believe I have to do this stunt today.” I’m crashing into a pond and I’m crawling up… That was tough. I’ve always been really close with my family and they’ve been my everything. My nieces and nephews are running around here today and I’ve told them since the day they were born that I’m their real mother. I think they’re in a for a lot of therapy. It was a very natural thing for me to understand the love story between the mother and daughter in this film. To me, that’s the most prevalent one, even more than the store between Adaline and Ellis.

How has motherhood changed you?

My boobs are huge and awesome [laughs]. That’s probably the most significant change.

THE AGE OF ADALINE opens April 24.