Breaking the Ice with “Barbershop: the Next Cut” star, Ice Cube 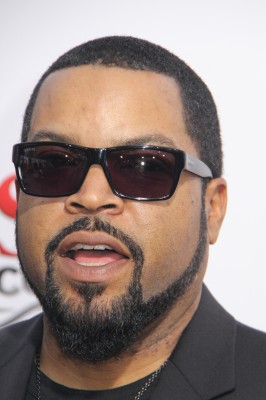 As Barbershop: The Next Cut is set to open today, legendary rapper Ice Cube adds another acting credit to his already packed resume and has yet to lose the solid character traits he started with in his humble beginnings.

Before  we even started the interview, I noticed Ice came without the typical “A-List Entourage” and not only did he get his own glass of water; as he exited the room he brought his glass up to the counter. Now, while most of you reading this would think that’s no big deal, in over 5,000 interviews I could literally count on two hands the stars that were equally as well mannered. Momma Cube…you would be proud.

While we all know of his edgy past and legendary career as a rapper  who grew up in the volatile neighborhood of Compton, California I can’t help but wonder what a typical day is like in the Ice Cube household today. In fact, his co-star Anthony Anderson is equally as curious wondering if the family gets Ice, Calvin or the man underneath it all, O’Shea Jackson (Ice Cube’s real name) 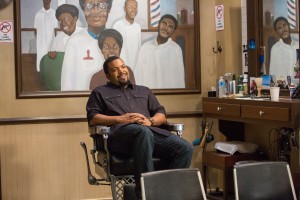 Q: With Straight Outta Compton and this movie, they seem to highlight similar issues while being set in completely different time periods. What is your take on that and why do you feel it doesn’t seem to be changing?

When we see things kinda not change as fast as you would like them to, you know that people are going through the same thing. With Straight Outta Compton, we knew people had the same anxiety and issues and it was the same kind of climate going on. And that’s the reason the movie worked but that’s also a shame that things don’t progress. Same with (Barbershop), we could have done it two years ago and hopefully two years from now if we did it, it wouldn’t be the same results. But it probably will be. The communities are not changing as fast as we want them to, that’s why these movies make us seem super smart, but we’re just highlighting what is a constant in the community. 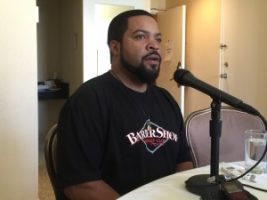 Q: You were seen as one of the kids from the street but now the new generation of kids from the street are killing each other not just on the street but in school. Back in your N.W.A days a lot of your music was targeted at violence and while your image was a rebellious one, you also found a way to generate pride and respect for their culture. Now all of these years later, it’s interesting  that you are still finding ways to get that same message across and because of that the younger generation still gives you the same street cred respect and look up to you. How does that make you feel?

It’s cool when you realize that you been in the game a long time and people respect what you’ve achieved. You do feel like you have a bigger responsibility to say what you know. And to give people the game as long as they want it and as long as they can accept it and are open to it. You feel like you want to give, give at this point. So yeah, it’s a great parallel between what Calvin goes through and what I went through in my career. 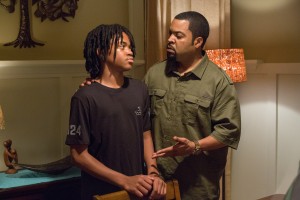 Q: Calvin is an ideal husband and father because he genuinely cares about his kid and shows the audience a man who helps with the dishes after dinner and puts in the effort to participate in the family. It seems so natural. That being said, share with us, what is Ice Cube like at home, are you as good as Calvin?

I don’t know if I’m as good as Calvin but I’m extremely present. Let’s put it that way. Some fathers, some guys, stick in the back room, while the whole family’s in the front. I’m in the front with everybody else because I think that’s where you need to be. You need to be present in the lives of your kids, and your family, and not just (be) a body there, but a present influence, and that’s what I try to be. I always tell my wife I would love to hear the horror stories our kids say about us because they don’t have none compared to how we grew up. We got real stories; y’all got fluff!  You gotta make up stuff. (They complain) “We don’t have popsicles in the refrigerator.” (They’ve) got to make up bullshit! We’ve got the real stories. If (our kids) grew up the way we grew up—we got the real horror stories so… they don’t want to hear that. What I’m saying is that I just want to make their experience as kids as better than my experience as a kid. 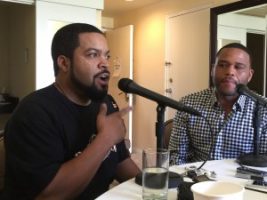 Anthony Anderson jumped in to say this: I have a question for (Ice Cube): Ice Cube the artist vs. O’Shea Jackson—the man, the husband, the father. How much of a presence is Cube in the house? I ask that because I get that question all the time. I’m just Anthony Anderson all day, every day. There’s a distinct separation between Ice Cube and O’Shea. So I’m just curious …

Ice Cube: O’Shea is always there but Ice Cube is shark that’s right under the surface. You’ll see the fin come up as a warning, but then you get bit. [laughs]

Barbershop: The Next Cut opens in theatres today.