Brie Larson Does Some Heavy Lifting as “Captain Marvel”, Literally 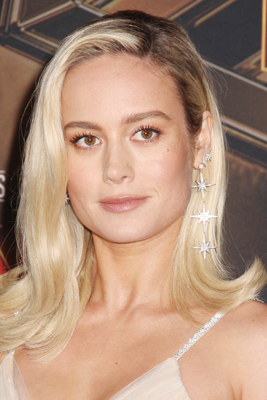 Oscar winning actress, Brie Larson is everything we hoped for in a female Superhero lead in the new film, Captain Marvel.  Most importantly, she brings a level of depth to her character who oozes strength both mentally and physically. But what would you expect from an actress who was deadlifting 225 pounds to prepare for her role. Larson shares how she overcame a number of difficulties her journey to becoming Carol Danvers / Captain Marvel. 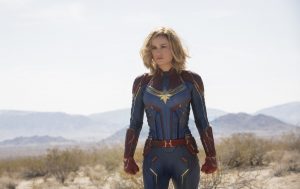 Q: What did you love about your character, Captain Marvel / Carol Danvers?

There’s a lot to love about her, which is why I was really excited to do this; in particular, the idea of playing a superhero, or a female superhero in particular because my interest is in female complexity; I was a little worried about playing somebody, a superhero that would be perfect — because I don’t feel like that’s realistic, or something aspirational at all. In particular, even with my job, like you could just see this beautiful finished product where I look great, maybe… in your opinion.

Ah, but you don’t know all the other takes that are on the cutting room floor where sometimes I physically landed on my face doing stunts — and sometimes I just do a bad take. It’s just how it goes.

So getting to play a character where the whole character arc and turn of this is watching her be this major risk taker, which means it’s not always going to work out the best. And those are the moments, the defining moments of her character, where she doesn’t lay down, she gets back up. I mean, that’s everything. That’s for everybody. There isn’t a person who can’t relate to that, I don’t think. 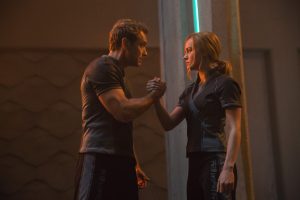 Q: In the process of your physical transformation to become Captain Marvel and look like the strongest being in the galaxy, was there ever that day where you’re like… “I need something to like help me get back up”? And where did you find that like extra motivation?

Yeah, all the time. You’ve been training for that many hours every day for nine months, like every day, I was just like, I’m amazing — like I sobbed in the gym many times. My trainer would be like, “oh, she’s crying again.” It’s very emotional when you’re kind of stirring up something very vulnerable and raw inside of you and you’re also learning that it’s just for you; there was nothing for me to prove. I wasn’t proving it to other people at the gym. I certainly wasn’t proving it to my trainer, because he was never going to be fully impressed; it’s his job to not be impressed. It was for myself and for me, the main reason for doing it was so that in moments like this when we’re talking about Carol’s (Captain Marvel) strength and we’re talking about, you know, what I learned from her, it’s that I’m stronger than I realized. Of course this movie is like assisted with the VFX, because I can’t personally shoot photon blasts. There’s not enough prep in the world for me to do that, yet — but I will figure it out if there’s a way. But I can stand here and say that I am really strong; I was able to dead-lift 225 pounds; I was able to hip-thrust 400 pounds. I was able to push my trainer’s 5000-pound Jeep up a hill for 60 seconds. Um, so this concept, when it comes to like gender norms or what the human body is capable of or in particular maybe what a female body is capable of, it’s capable of a lot, you know. 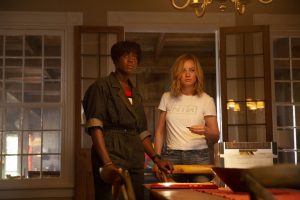 Q: What do you think if we go back to the beginning of Carol and Maria’s (Maria Rambeau, played by Lashana Lynch) friendship, what drew them together?

I think what they’ve gone through together, going through military training together, being the only women and then using each other to lean on each other through that type of like support and a recognition of their experience is really special. I mean, of course, I think they would have been friends outside of that experience and — but I think that’s a really tight-knit bond that they have and they’re family. I mean, that’s kind of what we’re talking about in this film is — without being too showboating about it, this is the love of the movie; this is the great love. This is the love lost. This is the love found again. This is the reason to continue fighting and to go to the ends of the earth for the person, the thing that you love. 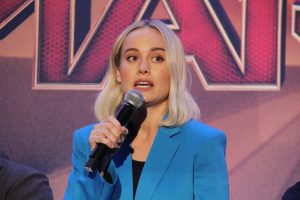 And it’s her best friend and her best friend’s daughter (Monica Rambeau played by Akira Akbar). Which to me is so natural. I don’t think that there’s at any point — even, I went and saw the movie with some people and it was like an hour later, where they were like, “oh, Maria’s the love.” Like, “Yeah!” So it’s not like… something that we made a big deal about, but it just feels so natural because that love is so strong and I’ll just like, I’m going to brag about Lashana for a second because I love it — it’s like the movie shifts when she’s onscreen. Because there’s a level of power that she commands in that, that I was talking with people yesterday and a lot of people were tearing up talking about some of the speeches that you give because they’re like, I felt like she was talking to me. She was reminding me of myself. Hello.

Q: Did you feel a responsibility to represent women before any other aspect of your character?

It’s an interesting question because it’s not so specific as that. I’m not going to do anything for a specific reaction. I’m just doing what I can do based upon my experience and my one body, which is why a representation on screen is so important. Because not one of us can tell the entire story. We can only tell our piece of it. But with films like this that do end up going international, a lot of the time with smaller movies you don’t know; sometimes they do, sometimes they don’t. It means you get to have a really extensive conversation with movies like this and I’m so grateful that this film has so many pockets in it. 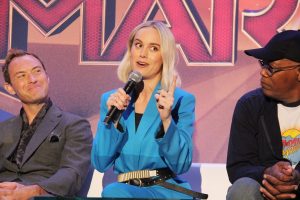 If you want to just enjoy it, you totally can. But there a lot of aspects to it that I think are worth  talking with your friends about, talking with your family about — and so when you have a multi-cultural, global conversation like that, I think it allows all of us through the veil of metaphor of a film to be able to reveal some deeper truths and maybe empathize in a new way.

Q: What do you hope for kids to take from Captain Marvel?