Samuel L. Jackson Introduces fans to a New Side of Nick Fury in “Captain Marvel” 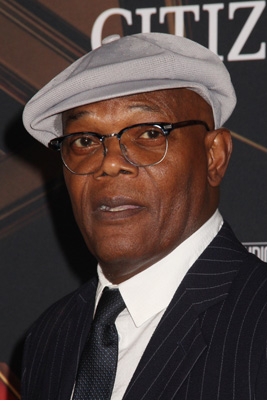 This is not Samuel L. Jackson’s first time around the Marvel block.  It is however the first time Jackson’s character, Nick Fury, whom he has played since 2008, shows fans a different side of himself in the new film, Captain Marvel.

The film is set in the 1990s, so we get to meet see the young Nick Fury which is one of the highlights of the film.

In our interview Jackson shares his experience of playing the same character from a new view and how he got along with his co-stars, including Reggie the cat.

Q: We’re seeing a new Nick Fury or at least a new side of Nick Fury this time around.  What was your favorite part of embodying, this ’90s version of our favorite shield leader?

You know, Sort of a kinder, gentler, not so cynical world-weary, chip-on-the-shoulder Nick Fury. Who hadn’t met anyone from another universe just yet and sort of looking at the crazy lady, trying to figure out why she thinks she’s an alien and what all that means and, it’s kind of fun to not be the all-knowing, angry, persuader that Nick Fury always is and even more refreshing to have two eyes, so I don’t have to cover one eye while I was learning my lines. 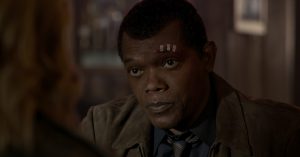 Q: Many viewers noticed Robert Downey Jr’s Tony Stark seemed to have gotten younger in Captain America: Civil War. Did you go into hair and make-up like, give me some of that Stark anti-aging cream?

No, more like, they put the wig on me and they put dots my face so it kind of felt like I was in Wakanda. And they started exploring, different things that I had done before so that they could use facial expressions that were already there. Fortunately for me I’d done, like three movies before this one. So they had stuff to refer to. So it was cool. It was just me and dots on my face and… having fun with Brie (Brie Larson, played Captain Marvel).

Q: Are you a cat person in real life?

No, I am not a cat person. But I’m also not a dog, bird or a fish person, either. So I just don’t engage pets. Reggie (cat played Goose) is like…most animals that, people bring to set that have been trained to do this, that or the other – he’s snack-oriented. 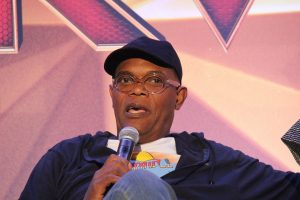 You give him something to eat, he shows up. you give him something to eat, you talk softly and nice to him, give him something to eat again. They (four cats) love you. So, it works out. And… there were actually four cats, but Reggie did the majority, he did the heavy lifting most of the time. But it was great to be around. I mean, Brie had more problems with him (Reggie) than I did, because she has cat allergies. we didn’t hang out between shots. I mean, nobody was walking around like, hey. Just carrying Reggie around. No, we gave him back to the people that owned him and let him be in his own space — and sent him back to his own trailer. And they (other cats) weren’t so people-friendly, either.