“Dumbo” Director, Tim Burton runs away with the circus to remind us all about the spirit in each of us 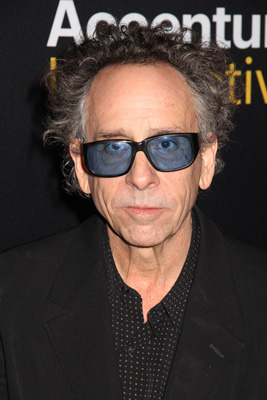 In Japan we use the word “Kowa-kawaii” which means “Scary-cute”, which not only describes Director, Tim Burton, it describes the new Dumbo.  Half cute, half scary and one hundred percent a Tim Burton film. Tim shares a little behind-the-scenes info on Michael Keaton’s bizarre wig he wore in the film, his feelings on the circus… By the way, this film is my most favorite music score by Danny Elfman.

Q: Which performer in the circus do you love the most?

None of it. It’s funny. I’ve made circus movies. But I never really liked the circus. But I like the idea of it. I like the idea of that sort of concept when you’re a child of running away to the circus. It’s just a phrase that sort of stuck with a lot of people. I think that’s the idea of not the circus per se. But the idea of being with a bunch of other weird people from around the world that can’t get regular jobs. That kind of a person. But the aerialists do knock me out and all that stuff and the trapeze artists. Yeah. 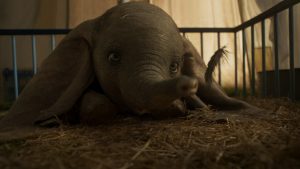 Q: Why Dumbo? What do you love about Dumbo?

I just liked, it was just the idea of it. The idea of a flying elephant and the character that doesn’t quite fit into the world and how somebody with a disadvantage makes it an advantage. So it just felt very close to the way I felt about things. It was just a very pure simple image. Like all the old Disney fables had that kind of simple symbolism for real emotions. 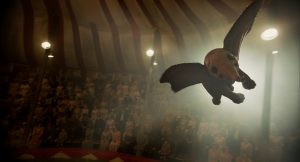 Q: The original is only 60 minutes long. So what were some of your ideas as to working with Ehren Kruger (screenwriter) that added to the original?

I just like the fact that it’s obviously a very simple fable, very simple story. And it’s heart, about family. And what I liked about it was the human parallel story. This character Holt (Holt Farrier played by Colin Farrell) who comes back from a war. He doesn’t have an arm. He doesn’t have a wife. He doesn’t have a job. Doesn’t have a you know. He’s trying to find his place in the world. And all of the characters actually are in that way. They wanted to be something. Nico’s (Nico Parker) character (Milly Farrier). She wants to be something else. Every character in it. Eva (Eva Green played Colette Marchant) is not… everybody is trying to find their place in the world. Like Dumbo. And using disadvantage to advantage. So lots of nice themes. But in a very simple framework. 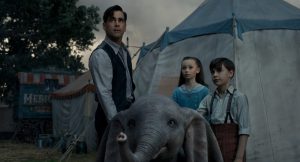 Q: What draws you to a performer or an artist? What qualities do you look for? Because you often work with the same actors.

Look at them all. They all look weird. It’s very simple. And in this particular case, it’s a few things. But there’s a point. Because Dumbo, it’s a heightened reality. So for me, there is two different things. There was one because it’s a weird story about weird family. It was very special to me to work with people that I’ve worked with.

Michael (Michael Keaton played C. A. Vandevere), Eva, Danny (Danny DeVito played Max Medici), and Colin, I feel like I’ve worked with him for many years, because he’s got the same kind of spirit. And meeting Nico and Finley (Finley Hobbins played Joe Farrier). Everybody, and Alan Arkin (played J. Griffin Remington). Having like a family, a weird dysfunctional family, like a film is and like the movie circus is, which is very beautiful and important. And the spirit of all of them really meant the world to me in terms of what the movie is and the spirit that they all put into it. And because it’s like a weird elephant, I had one thing in the back of my mind. All the people had to look kind of weird. Naturally. In a good way. 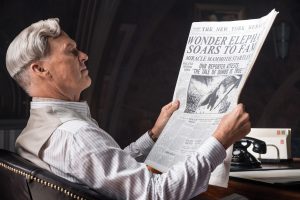 Q: Can you talk about Michael Keaton’s wig in this movie?

I was eating Kentucky Fried Chicken one day. I was looking at the tin. And we go hey. I think after the Batman thing, right, that’s why I didn’t talk to him for 20 years. He doesn’t want to put that damn suit back on. So for the character, this one, it was like maximum. My character, because he didn’t like ties. So his character wouldn’t wear a tie, right? Great stuff. But all for the character. And it was… he was great. He put on clothes. And on BeetleJuice, you try things on. Then you become like the character. 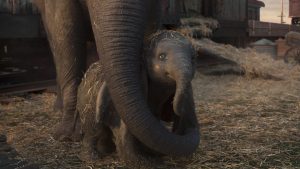 Q: The sound that Dumbo makes and Dumbo’s vision, how did you develop those?

We had a whole array of sounds. You know what I mean? And just varying base, upper lower. All that sort of stuff. We just tried to give him a voice without him speaking. And like you see with animals and things. You know there’s a connection. It’s not the exact human connection. But that kind of thing. That’s just part of his character. And was just developing up to even a few weeks ago. So we’ve been playing with that for a long period of time. And then there is the Dumbo. Because it’s his movie, his character, we try to give it so you felt like you’re with him and you’re in his point of view and you’re with him and being in the experience with him. And sort of Dumbo vision is probably based on the fact of seeing too many science fiction movies with alien vision. It came from outer space.

Q: Could you talk about the scene of separation between Dumbo and his mom? It might remind many people about the separation of the border from children and parents.

I think any family situation, but every family is different. I’m different. For me, I wish I had been separated from my parents. But that’s a different story. [Laughs]. But you know, most people would go yeah. You don’t want to separate anybody from your parents. Except me. But that’s fine. So I don’t think about. I think about things more in a spiritual simple way. There is news. I listen to the news and everything. But I always take things from a more like, I try to anyway, a human point of view that way. And because it’s like a fable. And all great fables tap into things that are true about today in human nature and other things. But it’s not literal. And all these people, it’s a period movie, it’s a fable. It touches on all of these things. But we try not to make it like ripped from today’s headlines, you know.