Camilla Belle from “Cavemen” talks about her favorite Ramen place in Little Tokyo! 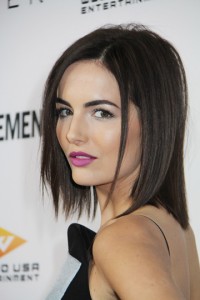 Camilla Belle, a native of Los Angeles, plays Tess, a girl who falls for her best friend, Dean. Does she believe friends can fall in love in real life? Cavemen was shot in downtown LA so we wondered, is she familiar with that area? She also discusses how the Hollywood industry has changed and her life as a multilingual actress. (Camilla speaks Portuguese and Spanish.)

Q: Do you believe that friends can fall in love?

I definitely do, for sure. But it’s very much 50/50. Either it’s going to become the love of your life because you have that history and you know each other so well or it can be a complete disaster. You try it and then you lose each other as friends and as everything. So it can go either way.

Q: Were you familiar with downtown LA and Little Tokyo before this film?

As far as downtown, I was born and raised here in LA and downtown to me has always been the place where I go to watch plays. I’ll go to the Ahmanson, Dorothy Chandler and Mark Taper a lot. So that’s kind of always why I’ve gone downtown. But recently, a lot of my friends live in Los Feliz and Silver Lake so I’ll go there and eat dinner and grab a bite. I’ve done that. I don’t really go out to the clubs there or anywhere [laughs], to be honest. I have been to Little Tokyo a lot growing up, Figueroa Street, and that whole area, growing up too in LA. So it’s been different versions of downtown for me. But it was fun to be able to explore another side of it during filming.

The Ramen place, DAIKOKU-YA, it has the yellow flag in the front. It was very good.

Q: You have been in the Hollywood industry since 1993 when you were a child. Do you feel the industry has changed?

It has changed drastically. Even the past five years, but obviously over my lifetime that I’ve been working. It’s become a lot more fast-paced. I call it a popcorn business. There’s one ‘in’ person every week. You don’t know who anybody is anymore. It’s all because of hype now instead of building a career which is the way it used to be when I was growing up. And that is very frustrating when you’ve grown up in a business where it’s been a certain way. It’s been building a career. People like Daniel and Meryl Streep and all these people built such longevity. It’s not just about being popular and hip and being on the cover of a magazine one month and it’s a new person next month which is what it’s become. I think it’s unfortunate that it’s become that way. I think all of us that have grown up kind of miss what it used to be. But you go along with the times and you have to adapt to a certain way. But I think you always stick to what you believe is your path and you go along with how you want your career to be.

Q: When you dream or express your deep emotions, what language comes most naturally?

Of course generalizing, but I do think the Latin language, there’s something about the romance languages that there is more passion involved. It’s more beautiful to hear. It’s more beautiful to speak. There’s more emotion behind it. I feel like when I’m speaking either language, I can express myself more. I feel more passionate about what I’m saying in a very weird way, especially when you’re in those countries as well you feel that, not as much as in Western society which is a little bit more cold, a little bit more reserved. I don’t know if I’ve ever had dreams… I’m sure I have but whenever I’m speaking, I’m not translating. So I am thinking in that language, if that makes sense.