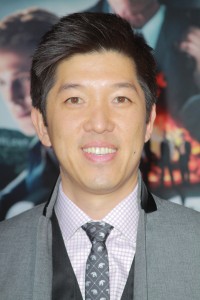 Dan Lin, producer of The Lego Movie, Sherlock Holmes, and the upcoming Justice League, is one of the most successful film producers in Hollywood recently. However, English is not his first language since he was born in Taiwan. What is the secret of his success in Hollywood? How can we enter the Hollywood industry? Being Asian, is there any advantage or disadvantage? What exactly is a studio executive’s task? He gave me a super clear answer! Also, he revealed what he did when he was an intern at Warner Bros., which contains the key to success!!

Q: Right after you graduated business school, you were hired by Warner Bros. How did you manage that?

I was very, very fortunate. I did an internship with Warner Bros. the summer before in the feature production group. And they enjoyed working with me and I enjoyed working with them. So at the end of the internship, my boss at the time, Lorenzo di Bonaventura said, “If you like what you did this past summer, come back and work as a junior executive.” So that’s what I did. But it required him giving me my big break and I realized most people don’t get that break.

Q: What did you do during your internship?

I did everything from making his coffee to preparing his picnic basket for the Hollywood Bowl to writing notes for him to giving him feedback on scripts to looking for remake ideas. So it was the whole gamut. But I think the lesson for young people, and certainly the lesson for myself, I was coming from Harvard but there was nothing he could ask me to do that I wouldn’t do as long as it was legal. The lesson I was told going into the internship was “Don’t drink the Harvard water.” Just because I went to Harvard doesn’t mean I’m too good to make his coffee or to make his picnic basket. I think what he saw was I was willing to do anything to help him and help the company. Attention to detail in making his coffee or his picnic basket is even important to me as a producer now. We have so many details going on in a movie and you have to be able to pay attention to the big issues and the small issues as well.

Q: As an Asian, how do you survive in this industry?

It really is about being yourself but being able to adapt to the environment. So when people talk to me they don’t realize that English is my second language. But when you speak to me at home or when I’m in Taiwan, they realize how Chinese I actually am. When I talk to people, they don’t realize that I speak fluent Chinese. So it’s just being able to adapt to that environment.

When I’m in a Western environment, being able to work in a more Western style. And then when I’m in an Asian environment, being able to work in that style as well. So I’ve had the blessing of kind of growing up in both worlds, in the U.S. and also in Asia, so being able to just adjust my style, still staying true to myself, but adjusting my style for the differences in each market. So for instance, in America and in Hollywood, people like you to be loud and brash and know your opinion. I can’t do that. But, I can adjust my style to be certainly more assertive than I normally am in Asian style. Like in a Japanese meeting, for instance, we’re all very respectful, very quiet, only speak when spoken to. That’s my attitude when I’m in Asian meetings. But when I’m in a Western meeting, obviously, that style does not work. Because if you don’t speak your opinion, people will either think that you have no opinion or that you’re dumb or you didn’t do the work. So it’s understanding the environment that you’re working in and adjusting your style for that environment while still staying true to yourself.

Q: What advice do you have for young people who want to be like you?

My advice is to immerse yourself into the culture. For instance, “The Lego Movie” people are asking me how did I get the rights to the movie. I spent a lot of time studying the Lego culture. I started this five years ago. This has been a five-year journey. I spent about a year of research indoctrinating myself in the Lego culture.

It’s the same way I think for Asian filmmakers, Asian talent, coming to the U.S. — immerse yourself in the culture. I always tell Asian filmmakers, you have to learn English. Don’t work through a translator. Even if you are insecure about your English, just try. People will listen. They will give you a chance. Don’t always work through a translator because there’s something lost in that translation. Come here to the U.S. Work here in the U.S. if you can. You may not be able to direct your first movie here, but work and learn the U.S. system. Watch how other filmmakers work. If you’re young enough, come to film school here. Don’t go there. If you truly want to make an American-style movie, come to American film school. Learn how the system works here and get to meet other colleagues so you can put together your crew that’s American based. That’s my tip for anyone who really wants to cross over, even actors. Don’t be afraid. Come here to learn. It’s hard to learn English just in Japan or just in China or just in Taiwan. It’s hard to learn just in class or through a tutor. The only way you truly learn the culture and have your accent be accurate is immersion. I know it’s really difficult because you have to be really bold and brave because you can be uncomfortable but I think you should take that step.