“Carrie” star Julianne Moore chats about her kids and bullying 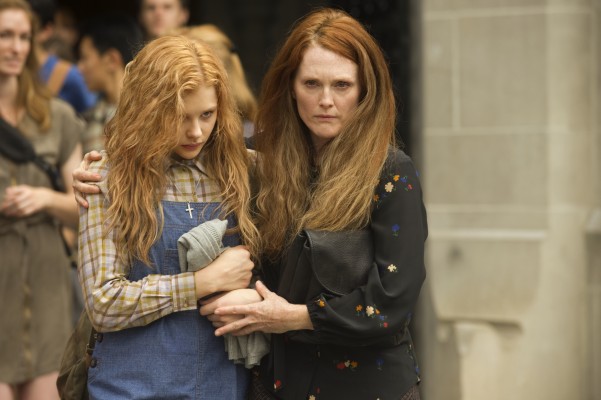 Carrie is based on Stephen King’s novel of the same name. Yes, the book was first adapted to film in 1976 and received Oscar nominations in the leading actress and supporting actress categories.

This 21st century Carrie is played by Chloe Grace Moretz, and Julianne Moore portrays Carrie’s mother Margaret. Just like in the book and the 1976 film, Carrie develops her power under the pressure of being bullied. This 2013 version uses cyber bullying as well as direct physical bullying.

As a mother of two children, 10 years old and 15 years old, what is Julianne’s take on bullying? How does she teach her kids to deal with bullying?

“One of the things I always say to my kids — and this is back to the theme in Carrie too — is that the most dangerous thing for a person to feel is isolated. So I’m like, ‘If you ever see a kid sitting alone, if there’s ever a new kid, if there’s ever a situation where it seems like somebody is not being involved with something, go talk to them. Go ask them if they want to play. Ask them if they want to sit with you at lunch. Make sure you say hi to the new person. Make sure that person is okay. It’s really, really important.'”

As a mother of a teenager in real life and on screen, Julianne appreciated the casting of this version of Carrie.

“Chloe’s only a year older than my son so it was very easy for me to relate to her and be with her and talk to her. I thought it was great. What was interesting was having an actual adolescent in this part because it had been played before by somebody who was in their mid-20s and there’s a real difference. There’s a real, real difference between a kid that’s 26 or 24 and somebody who is 15.

“I could see that even in the read-through where a lot of the other kids that we had were in their 20s already. And Chloe was still very much a kid and was probably more comfortable being with me than she was with those older kids. It was very sweet. I was her source of comfort and safety. And in a way, that’s what’s interesting about this movie too. As crazy as her mother is, her mother is her sole relationship. So what we developed between us was we were very close. She felt very safe with me. I made sure that she felt very safe so that we were able to do whatever we needed to do.”