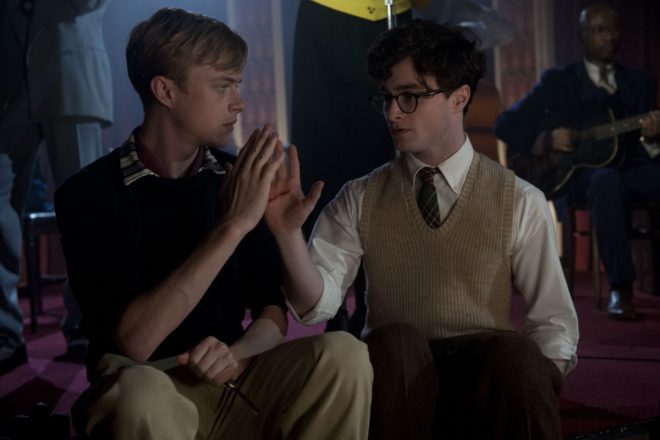 Kill Your Darlings is a biographical film of Allen Ginsberg and his friends while Ginsberg was in college. English actor Daniel Radcliffe, a.k.a. Harry Potter, plays famous American writer Ginsberg who is considered the leader of the Beat Generation.

Radcliffe has been trying to succeed in his transformation from child actor to young adult actor after graduating from the Harry Potter series. This film is one of the biggest tickets to make that happen for him. So he was challenged with not only having a kissing scene with his co-star, Dane DeHaan, but also by having sex with another male actor! Yes, he is no longer Harry.

How does Radcliffe see his own transformation? Does he have a different point of view of actors from five or so years ago?

“Since finishing Potter, there’s been a huge journey for me in terms of, well, I’ve never really worked with different crews before and with different groups of actors before. Woman in Black was filmed in England. If you’ve done a Harry Potter film, you’re never going to work again in England without knowing someone on the crew. So doing Kill Your Darlings was a huge thing for me because it meant I would be working with nobody I knew and I would have to find out who you are on a film set again. So it felt like I was starting fresh in a way. But, that was really exciting.

“Working with John, our director, he did introduce me to techniques in ways of working that I’d never been shown before. I don’t know from what point exactly, but I think from doing How to Succeed in Business, the musical, and through Kill Your Darlings, that was a great period of transition for me in the way I worked.”