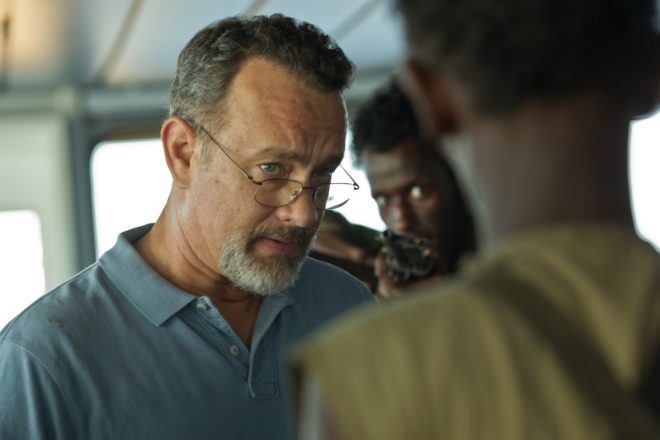 Captain Phillips is based on actual events which occurred in 2009 when an American container ship was hijacked. A master at making tense films, Paul Greengrass helmed Captain Phillips, proving his talent at balancing the tension in this type of movie. He manages to pull and release the suspense string really well with his timing.

Tom Hanks plays the title role of Captain Phillips. He shows great strength as the leader of the crew while also demonstrating weakness as a human, and it is some of the best acting of his career.

Like Captain Phillips, Hanks has a wife and kids in real life. Did he think about “what if” while he was playing this role?

“There are times in your work where you do that, but after a while that well has been gone to a few times too many, and it has to be more an empathetic reaction to the actual people. I got to know Rich (the real Captain Phillips) a little bit. I don’t have anything in common with Rich. I love my family, I love my kids, (but) when the moments come, it’s not as though you can just substitute your own life with what you’re doing on film. You have to go to some other place where it’s bigger than your own life. And it has more impact than that.

“I don’t know how to explain the process and I certainly wouldn’t, but it’s not merely thinking about my wife and my kids, and what would I do in these situations. It requires being open to a bigger, holistic vision of what the story is, as well as the truly tactile experience of what we’d been through over the course of making the movie. Early on (in my career), when I wasn’t 57 years old, when I hadn’t done that much or seen that much, yeah, I would say I would turn to images of my family quite a bit in movies, in the work that I did. But as time goes by, you’ve got to see it in a broader picture than just your own personal world. You’ve got to look at the bigger world and be a part of that.”