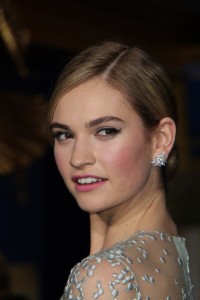 Lily James from Downton Abbey became Cinderella whom almost all girls dream about playing. Did Lily feel any pressure? What was her favorite princess? And yes, I asked her about the slippers. Was it easy to run in them?  I got all the answers! 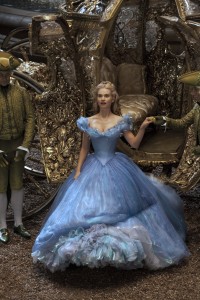 Q: When you were growing up, were you a fan of these fairy tales? Was Cinderella one of your favorite stories?

I loved the princess stories growing up. My grandma would make me little princess outfits and I had plastic slippers that I wore in the house. So I was totally one of those girls. Thankfully I had two brothers that stopped me and knocked me right off my pedestal. But I would say Belle was my favorite. I had long dark brown hair and I think you side with the princess with your hair color, like the Spice Girls [laughs]. Also I felt like Belle’s spirit of adventure and of wanting more and “I want the great wide world…” I liked those spirits of the princesses, like Ariel, because growing up that’s what I remembered, that they want more, dream more, rather than Cinderella in the animation, which is much more about the prince saving her, which we didn’t want to carry through to this. 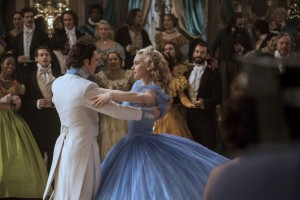 Q: Playing Cinderella, a dream role for most girls, was that a big pressure for you?

I think the greatest challenge was the pressure I felt, which wasn’t only being fearful of a reaction and of ruining Cinderella for everyone in the world because everyone has such a clear image of her whether it’s from a storybook or their imagination or the animation. But it was my own pressure put on myself too. I think every little girl wants to be a princess but then the reality of actually doing it and believing you could be feels like it’s a pretend thing or something that’s real and it’s sort of unachievable. So that was the challenge, and the way of overcoming it was Ken (Kenneth Branagh, director) because he was so clear and wanted this to just be a girl — she’s just a girl not a princess, you know. He made it about the story, moment to moment about the relationships. So I ended up not even thinking of her as a princess, just thinking of her as Ella. 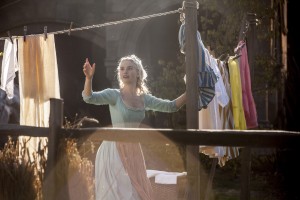 Q: In this film, Ella had words from her mom to keep in her mind. Do you have any words from your mom or dad or grandmother that stick in your mind?

Q: How comfortable were those slippers?  Was it easy to run in them?

I don’t know because they don’t fit my foot, but luckily we could put CGI. It actually fits no human foot so it’s not like they miscast me [laughs]. It’s made of Swarovski crystal so it would break and it wouldn’t be comfortable. So I don’t know. 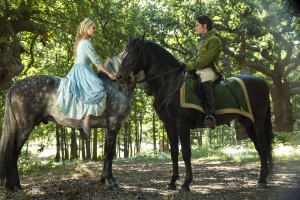 Q: How was riding horseback without the harness and holding a conversation with Prince Charming?

I think the horses were actually the reason we had chemistry in that first scene because it was a genius idea I think of Ken’s to just put Ella on a horse, because I think it gave her strength and the freedom that she wouldn’t necessarily have had and a womanliness on a horse. You feel more connected, grounded, and there’s something feral about it and sensual. And when they meet, we were literally controlling these horses and there was this life force underneath us in the scene and it was about letting go and holding back and a bit like when you fall in love. We were circling so there was motion and movement. So it felt really essential and I think it made the scene. I had never ridden before so I had lessons for a few months before we started shooting and I had to do bareback, which I find more comfortable of a way than having a saddle.