Danny Collins star Al Pacino says watching his screen granddaughter reminds him of his youngest daughter: “I see my daughter and the things she’s doing now.” 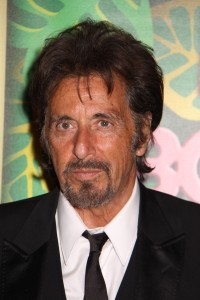 Legendary actor Al Pacino stars in the title role of Danny Collins, an aging famous singer. Danny wants to change his life after an eye-opening incident. Has Al himself ever experienced that type of moment? Has Al ever been treated in the same way as Danny,  with people expecting him to act toward his hits?  The scene of Danny with his granddaughter seemed more than mere acting; it seems Al is very good at playing with little kids. He talked about these topics and more! 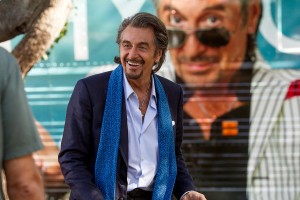 Q: Did you have any eye opening moments in your life like those Danny has?

Well, I myself had these little, like all of us had these little benchmarks, but mine finally was you could say when I realized that I was gonna do this for the rest of my life.  It didn’t just come to me. I was acting since I was really young, in schools then I went to performing arts, and then I went acting in the Village.  We did plays, I did sixteen shows a week. We used to pass the basket at the end of the show, that’s how we lived. So that was my life. And I thought I was gonna do this, but I couldn’t find… I was doing a lot of different things. I was doing reviews, I was doing comedy… I was doing it to eat, in a way, and it was, you know, a game to me. But it wasn’t till I started to really delve into roles that demanded more of me. It opened me up to another world. And I mean by that the great classics, the great western classics like Strindberg and O’Neill, Shakespeare, Chekov, and then through just doing that finally I had this bit of a seminal moment, and I was young enough too, I was about twenty one, twenty two, and I knew then when I was able to find that world that I could exist in and express in, I knew then that I was fine. I knew everything was gonna be alright because this is what I was gonna do. Everything else about getting a job or making…didn’t matter as much because what mattered is was that as long as I was doing this, I was gonna be OK. Cause there’s so much out there. Yeah? 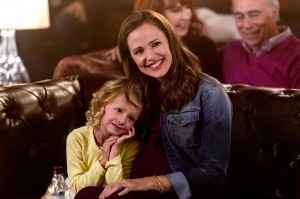 Q: You’re really good working with and playing with the little child who played your grand daughter. How good are you with little kids?

Well, you know, like they say, it’s not easy. I’ve had a lot of kids so, but in acting because they’re so good, and with this girl (Giselle Eisenberg) particularly… it just came outta, you know. One wonders how long is that gonna last. She’s seven or eight but you know… but I just think it’s kind of a privilege to watch her work. I’ve worked with a lot of actresses and she’s up there. But also I see my daughter and the things she’s doing now, because I think my daughter, my youngest daughter… my oldest daughters a filmmaker, what my youngest is…the thing that I saw and I think it’s very interesting, why I liked what she did, she does things occasionally just to do them, just to do them, no fanfare, no interest in whether they liked it or don’t like it, we should be paid for it and become famous, she just does it for the pure love of doing it, and I thought that encouraged me more about her and her work because I could see that it didn’t matter what… she wanted to do this. She put it together, directed it, she played three characters in it and it works, it’s funny. But that’s not the point. The point is she loved doing it. That’s what encourages me when I see that. It’s for the thing. And then what happens to all of us, we get caught up in the result, we get caught up in the applause. We want to sort of repeat it if we can, we fall into these traps, but the getting back to the source… I remember being in a play once, I go on a lot, but I was in a play once and I did something, the play was with James Earl Jones. I was young, like twenty five, and I did something one night and I really thought wow, it just came out of nowhere, I did it and it worked. And so the next night I tried to do it again, but it didn’t work! You know, because I left the source of what it came from. 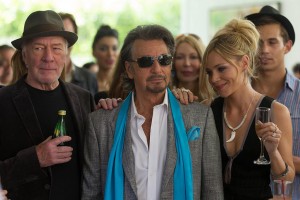 Q: Do you feel like you have an actor’s equivalent of Danny’s hit song where maybe it was a role that you were happy to do, but directors or writers always reference that role, or even fans?

It would have to be at first, but now through years and years of doing it, I’ve done so much theatre and stuff, now the HBO thing, so… it used to be “The Godfather” naturally. “The Godfather” was the sort of start of something big, I guess. “Panic in Needle Park”, a film I love by the way, Jerry Schatzberg directed it, my first film, with Kitty Winn, it was wonderfully done film really. But “The Godfather” was so much of a shock really, for me, then that was the film Francis (Ford Coppola) wanted me in. So again, when a director wants you for something you perk up. You say well he saw me in the part, and I was unknown at the time, that’s who he saw, that was it. We had known each other a year, he wanted me for another movie because he saw me on the stage and he wanted to use me in a picture which never got made, so I spent almost a week with him in San Francisco and then I didn’t hear from him for a year. And I guess that was a very valuable week because we connected and then he saw me in that part, and nobody could shake him from it, and everybody wanted to too, including me at one point. But he stayed with it and it turned out to be extremely fortuitous and lucky for me. And at the same time you know, so you know I have no regrets, and the fact that early on, and it will continue to be the seminal role for me in terms of my… but I’ve done a lot of parts now and finally it’s getting… you go through stages too when you’re young and it’s a… and you’re a, you know, so-called movie star. It’s a different world. And then you’re an actor. It’s the combination of fame and being an actor and anonymity and the use of anonymity which I so love and cherish. Then you learn to live with the other thing. And so it’s always a series… it seems to me, the most sensible thing ever said to me was by Lee Strausburg, when he saw early on in my career that I was having a little trouble navigating, and he said, “Darling, you simply have to adjust.” That’s all, and I thought… naturally I didn’t, but still in all, it was a refrain in the back of my mind, hearing his voice say that. It was very helpful you know, when you’re ready to hear things.