Don Cheadle stays “Miles Ahead” of the competition – starring, producing, and directing the story of legendary jazz musician, Miles Davis 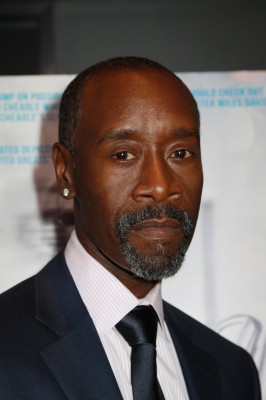 As an old school jazz fan, screening this film was truly a pleasure. In fact, I got the same feeling watching Miles Ahead as I did listening to Miles Davis’ himself – that’s how good Don Cheadle is in this movie. I also gained a newfound respect for Cheadle and a complete understanding of what inspired him to dedicate 10 years of his life to create this film and how he successfully juggled acting, producing, and directing.

Cheadle grew up playing the saxophone which eventually lead him to the California Institute of the Arts where he graduated with a BFA in Acting. After a decade of film roles and awards, Cheadle stepped into Miles Ahead an accomplished actor, producer, and seasoned musician who was now taking on Directing.

In our interview with Cheadle he shares his memory of being introduced to Miles Davis’ music and what it was like working with co-star, Ewan McGregor; including their first meeting which almost didn’t happen.

Q: Tell us about when you were first introduced to Miles Davis’ music and what led to Miles Ahead.

Well, my first introduction to Miles was before I was conscious of it. My parents played the music. It was in my home. When I went through their record collection there was Miles Davis in it. I would recall, “Oh. That’s what that was.” I didn’t know I was listening to Miles’ music. I just knew I was listening to this incredible music. And then I started playing the sax myself when I was in fifth grade or sixth grade. So, my way into Miles’ music was through Cannonball Adderley. I was trying to figure out what he was doing on the horn and what those solos were about and transcribe them and try to play them. Then I just became enamored of him and his music and all of these leaders he spawned. Everyone that played with Miles became a leader in their own right. From Herbie to Key to Wayne– all of them. So, that was incredible music to bump into. So, I’ve been listening to his music for thirty or forty years. As far as this movie being made, Vincent Wilburn Jr. — Miles’ nephew– when he was being interviewed at the Rock and Roll Hall of Fame Induction Ceremony for Miles Davis, he was asked if they were going to do a movie about his life and he said, “Yes. Don Cheadle is gonna play him.” From that moment when he made that declaration, was when I met with the family and we started talking about what and how and when. 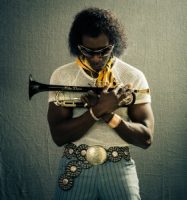 Q: Did you ever meet Miles Davis in person?

Q: Did you have any fear or hesitations taking on the role of a music legend ?

There was no part of it where fear wasn’t in the sidecar. I knew that I was taking on something. Any one of the things that I would have done to take on producing it, directing it, acting in it, writing it, composing music. Anyone one of those things by themselves for someone like me was fear to induce. To do it all. I tried to give this away several years ago. I tried to hire another director so that I could not be faced with that responsibility and be faced with four things. But that didn’t come to pass. Everybody who I interviewed and I met with said, “This is your vision. Why would I? You have to see this through til the end. This is your journey.” And thankfully I knuckled down and did it. If this thing had gone away years ago, I would’ve bitched about it, but part of me would’ve been relieved that I did not have to deal with all that pressure. Honestly. My wife came down to see me halfway through. She was there at the beginning and then she left and she saw me about a month later when we were up in production, and she said, “You can’t ever do this again.” I lost weight, I was stressing out. She could see it. I wasn’t sleeping. Every ride the next morning in the van was about, “How many hours of sleep did you get?” That was a thing. If somebody would go, “I got 8 hours, 7 hours of sleep,” then we’d be like, “How? Give me the mix. I need the powder or whatever you did.” [laughs] 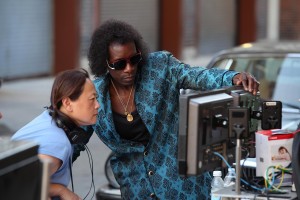 Q: What were your friend’s reactions when you said, “I’m writing it, starring in it, directing it and producing it”? Did they go, “Yeah, we’ll see you when you get out of rehab”?

Yeah. [laughs] It’s funny cause my producing partner on this movie, she said, “It’s amazing that you just didn’t become a drug addict during this period of time. Or just like not show up. Or just stay in bed one day. Or just quit. Or just get on a plane and go home.” Any of those things — I was like, “How can I ever do that?” she’s like, “All of those are options and people have done all of those things when they’re dealing with this amount of pressure.” I mean, I’ve wanted to. I definitely had days where I did want to just walk off the set and say, “That’s it!! I’m done! I can’t deal with it anymore,” and she had to … one famous day after I saw a rough assembly, an early rough assembly, which is so dangerous to do when you’re directing, she had to literally come tell me the next day and get me out of bed and say, “You have to come to the set!! You have to show up and direct! People are there, you have to work!” I know of two or three directors that have told me a very similar story. Denzel (Washington) told me a story like that when he did The Great Debaters, that his AD had to come in the trailer and he said, “I can’t move. I can’t move,” and AD said, “Stand up!” and he got him to stand up. Then AD said, “Now take a step!” and he took a step. AD goes, “Take another step,” he took another step, and the AD literally had to baby walk him all the way to the set, and I completely understand that feeling. You just feel like you’re taking on something that’s so important to you, and you’re gonna drop it. It’s like someone handing you a prenatal baby and you’re like, “I’m gonna mess this whole thing up!” 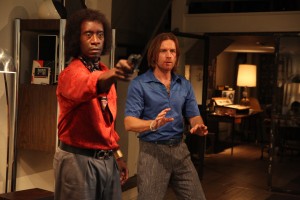 Q: Tell us about casting Ewan McGregor and what it was like to work with him?

We had a great relationship, a great chemistry. Ewan is someone who’s work I was familiar with. I wanted him to play someone close to himself.  He wanted to do it in an American accent and I was like, “No, I want you, Ewan, to be you.” The first day that I was supposed to meet with him and discuss the script. I’d already gotten the feedback from our representatives that he liked it and was into it, but he just wanted to meet and talk, so I was supposed to meet him at his house. So I show up. I’m very prompt and he’s not there. It’s five minutes. It’s 10 minutes. It’s 15, 20, 25. And I think, “Oh, he’s doing that actor thing,” where he’s trying to let me know who’s really running shit around here. “Now you just wait. I’ll get there when I get there.” So I was like, “OK. I’m not going to blow up, but I’m not going to wait much longer.” And the door bursts open and he’s out of breath and like, “Oh my God. I’m so sorry.” He’d just gotten a new motorcycle and, you know, he’s an avid motorcycle rider, and he just had to ride it, and forgot. He almost got into a wreck on PCH because he (remembered) and went “Oh shit!” and spun around and came back to meet me. So he’s just really a generous, supportive collaborative partner in this, and, as he said, it’s a little tricky when you’re acting with your co-star and your co-star goes, “Cut!” and says, “This time you might want to …” You’re not supposed to do that (as an actor). But as your director, you have to listen. We, very quickly, came to an understanding and a shorthand that allowed us to really be good working partners, I think.