Eva Green from “300: Rise of an Empire” loved her costumes but had one small problem… 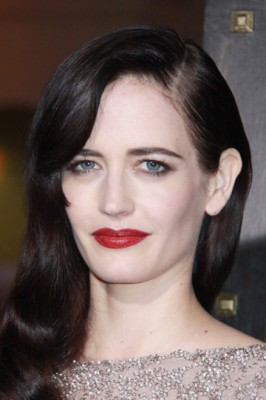 Beautiful Eva Green played Artemisia who is Greek but because she was abused by her own countrymen, she came to hate the Greeks and became a commander in the Persian navy. The 2007 film 300 was a guy flick. The story was driven by men and the main characters were all men. However, the sequel 300: Rise of an Empire has two women playing key roles. One is Artemisia, a skilled sword fighter with a strong mind who will do whatever it takes to beat the Greeks. What did Eva discover playing that type of character? She also explains Artemisia’s tragic life. 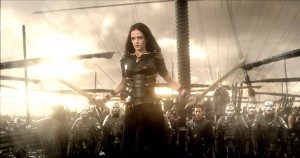 “First of all, it’s quite rare to see strong women in an action film kicking some ass, so that’s cool. She’s like a man in a woman’s body. She’s ballsy and very brave. She was traumatized as a child; she built this armor around her to survive. She became so driven by vengeance, blinded by vengeance, and completely obsessed, and she’s bonkers, a maniac and bonkers.” 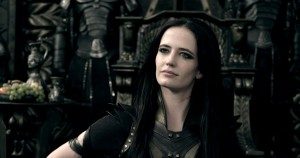 Eva had some serious fighting scenes. Did she have to build up her body in order to be a fighter?

“I was kind of lucky because I didn’t have to be naked like the guys so I was allowed to have my glass of red wine in the evenings. I’m so not physical so that was such a big challenge. You feel very powerful actually but not straightaway. It’s very scary at the beginning to have to do all the squats and lunges. It’s like, ‘Oh my God.’ It’s painful. But then it helps you for the fights. You can go quite low. After a while you feel very proud of yourself and that was the best thing. I adored it. The stunt guys are just amazing because they’re so passionate. They love it and they’re fun. It was my favorite bit I have to say.”

What kind of choreography did Eva have to learn for the fighting sequences and stunts? 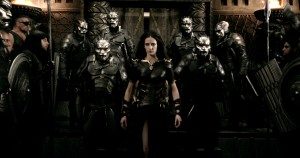 “It’s like a dance. I’ve always been an enormous fan of those Chinese films, Hero, Crouching Tiger, Hidden Dragon, and all that. So I felt like a little girl and I had great masters. At the beginning, you can’t think too much. You just have to do it. So that’s a great thing, just let it all out. Just go for it. But it takes a while to digest it and be able to do it. It requires lots of work.” 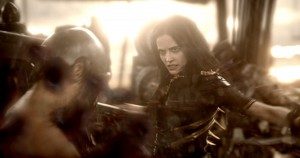 Eva wore some very cool Goth-type costumes which are amazing. But there was one problem…

“(Costume designer) Alexandra Byrne is very talented and very brave. I love that outfit that she made with the golden spikes erupting from my back. I look like kind of a dinosaur or something. It was very cool and very easy to move. Sometimes my hair got caught in the spikes but you don’t see that in the film. Otherwise, it’s my favorite outfit. I look like a weird animal. It’s cool.”