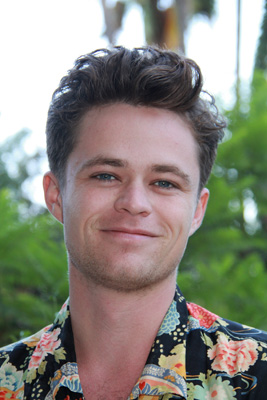 Just when you thought teen romance was dead, a hunky angel played by Harrison Gilbertson shows up on screen and we have fallen all over again.  In the first film of the Fallen series,  a young girl named Lucinda (played by Addison Timlin) finds herself in a reform school and drawn to a fellow student named Cam (played by Gilbertson) while another student named Daniel is secretly in love with her and has been for centuries. Let’s just say this love triangle is where the Facebook status “It’s Complicated” must of come from.

We sit down exclusively with Harrison and chat about the film, how he prepared for the role, the meaning behind his tattoo and he secret strategy to get you hot and sweaty. 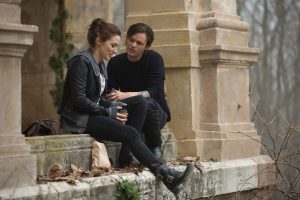 Q: Had you read the book prior to your audition?

No, I read it after I got the role. I read the script and I got the idea of the character at looking at some stuff online. I got a rough sort of assembly of where his character goes and then after I was cast I read all four books quite quickly and made notes. 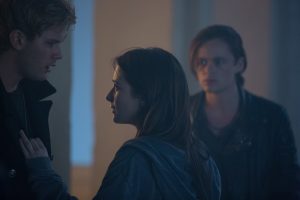 Q: I was confused about Cam, would you say he is a good Angel or bad Angel?  How do you describe your character?

I think in the first instalment of Fallen it can be quite hard to understand because he comes across as the bad guy, but as the books go on you realize he’s not really a bad guy after all  He’s just trying to fix the issue and he’s kind of on the same side as everybody else. He just goes about it in a different way. So, he is just a bit of a rogue, a loveable rogue, but certainly the first book he comes across as more of a nemesis.

I started young, yes. I was seven, or six when I did my first film. I didn’t do my next one till I was fourteen. But since I was fourteen it has been quite consecutive. And I love it, it’s what I want to do and I want to keep doing it.

Q: Was the decision to become an actor your Mom or Dad’s, or was this something you wanted to do?

No, it came from me. I think I just said to my dad when we were watching a film, and I said I want to do that. I don’t remember which film. I think when you are young and you have a really clear idea of what you want to do, I think everyone in their childhood has ideas of what they want to do. I want to be this or want to be that, or I want to be that when I’m older. But it was very specific for me I knew I wanted to be an actor. Really the only thing that’s changed since I have gotten older is that I want to be a story teller, I want to write, I want to direct, I want to do other things as well. I always want to be acting. I find it very therapeutic for me. I think as a kid too I’ve always had an empathy for people that I wouldn’t know how to converse with sometimes. So, with acting you can take that empathetic nature and you can represent what you’ve seen that makes you feel sad. I think with acting it could be quite therapeutic.

Q: I understand you have a tattoo, is there a meaning behind it?

Yes, it’s a willy wagtail. It’s a bird back home in Australia. When you see them, in indigenous culture it meant to be an omen from your ancestors. Your ancestor telling you something when you come across one. We used to have a nest in our tree back home. That’s why I got it to remind me of my childhood and my beautiful home where I grew up in. Whenever I do a film, I always cover it up. Even if I play a guy covered in tattoos, I always cover him up. Because it’s part of my process now, is to put the makeup over it and I start becoming my character. At the end of the day I wipe it off and go back to Harrison.

Q: In your off time, what are you into?

I’ve starting boxing, which should be fun. My favorite sport is Australian Rules Football. It’s about to enter the final season so I have downloaded the app so I can watch the game over here, which is fun. I’m reading a book called How to Live which is based off the examination of the works of Michel de Montaigne who is a favorite philosopher of mine. Watching films for research, so I try to watch as much as I can in the evenings to educate myself in the kind of projects that are being made at the moment.

Q: Anything crazy you have done for audition?

There was an audition. I had to play a junkie in the audition. How do I get that look? That glassy eyed and sweaty.  So, I got a tiger balm and I put it all over my face and under my eyes. My eyes were burning a little bit and my face started to sweat. I did this audition and I didn’t end up getting the role, but the casting director was like you look so good. You looked like a junkie. I was like, tiger balm. It will make you sweat. [laugh]