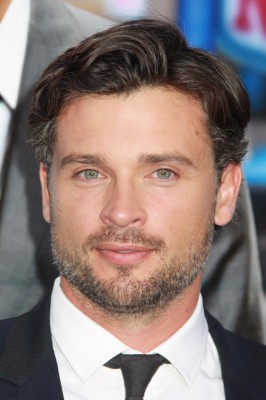 Former Superman in the TV hit Smallville Tom Welling plays veteran football player Brian Drew in Draft Day. I sat down with him and asked about his role, what he is interested in now, and how he overcomes pressures. 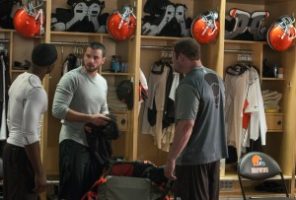 Q: What did you enjoy most about playing Brian Drew? (One of our readers submitted this question!)

TW: I think I enjoyed telling the story of a veteran quarterback who’s feeling like he’s at the top of his game. He’s a veteran quarterback who feels like he’s in the best shape of his life and he shows up to realize he may be replaced by an unproven, rookie draft pick. To me, that was an interesting situation to explore, and also, being able to work with Ivan Reitman and Kevin Costner and the whole cast. It’s such a great cast in this film.

Q: Did you work out for this role?

TW: No, I didn’t get a chance. I only had about 10 days from getting the role to being on set. So I didn’t really get a chance to work out.

Q: What did you research for this film?

TW: More about the lifestyle of what it means to be an NFL player as opposed to the game of football because in the film I might play the quarterback but the film doesn’t really show my character playing football. They just talk about it a lot.

Q: What did you learn from Kevin Costner?

TW: What I learned about him is that he’s awesome. Everything I wanted him to be as a fan, he was as a person. I also learned that he’s reached such a level of success but he’s still there and he’s very grounded and very much into elevating material within a scene.

Q: What’s your worst audition experience and how did you overcome it?

TW: Well, it’s always a bad experience when you don’t get the role. You just try to go back and learn from what you did or didn’t do correctly. But sometimes you can have a great audition and still not be chosen. There’s just a lot of dynamics that are in play. Having the opportunity to be a director and a producer, you see that there’s some things that just prevent someone from getting a role. A lot of times, like even in Draft Day with Kevin Costner’s character, he’s a general manager and there are certain attributes that a player can have and certain intangibles that cannot be measured that he has to evaluate. So there’s always a lot of things going on.

Q: How have you overcome these stresses and the pressure?

TW: You endeavor to not be attached to the result of what you do. You go in, you do your thing and then you try to not think about it anymore because really the decision is up to other people whether or not you get the job. But there’s similarities between being an NFL player and being an actor in that there’s always somebody else trying to take your job. There’s always someone else trying to beat you to something. The only difference is we don’t have anyone running and tackling us at the same time.

Q: Do you have any tips for overcoming pressure?

Q: What advice do you have for young actors who want to get into TV or film?

TW: I don’t give advice about careers. I really don’t. All I say is if you love it, then go for it. 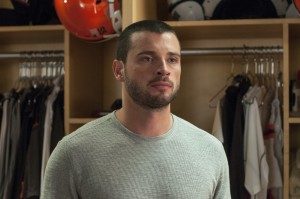 Q: Why are you passionate about acting?

TW: I enjoy it. It’s fun. It’s a creative freedom and outlet. I love to tell stories and this is a great way to make a career out of it.

Q: What moment did you know you wanted to be an actor?

TW: I don’t know. I acted when I was a kid in like school plays and things like that and I remember that being pretty fun, being on stage and just being like, “Wow, this is pretty cool.” Then when I came out to Los Angeles and I decided to start going on auditions for television and film, there was a conscious effort to make that move and to go for it.

Q: Was there any one moment that made you want to do it?

TW: No, I just wanted to do it. Going on auditions, I just really enjoyed acting in the scenes. I thought, “Well, maybe I can make a career out of this.” And 14 years later, I’m still working so that’s a good thing.

TW: [Laughs] I’m not writing any books. You’re going to be waiting a long time for that. I’m interested in all three. I enjoy storytelling. So however any experience I have can help get a story made, then that’s a good thing.

Q: What are some of your favorite things?

TW: I don’t really believe in favorites of anything and sometimes things change. There’s different reasons to be a part of different projects so I’m open-minded. I’m looking at a couple things but I’m not signed on to anything next.

Q: You want to focus more on acting right now?

TW: Not necessarily. Everybody wants me to pick one but I don’t feel like I have to. I think it just depends on the project.

Q: Ten years from now, what do you want to be?

TW: [Laughs] I have no idea. I don’t know.  Hopefully, I’ll have some more films under my belt and maybe have directed and produced some films. But I don’t know. We’ll see what comes next. I don’t even know what my next job is so I don’t know what 10 years is going to be.

Q: Where is your dream country you’d like to visit?

TW: I would like to go to New Zealand. I haven’t been to New Zealand yet. I want to go there. It just looks cool in the Lord of the Rings movies.

Q: What’s one of your favorite countries you’ve visited?

TW: All of them. I love all of them. France, Italy, Germany, the United States.

Q: On a Sunday afternoon if you have no work to do, what would you do?

TW: Sometimes I do nothing. Sometimes I watch movies. Sometimes I try to sleep in. In this industry, Sunday isn’t really like a Sunday. You have to create your own weekends and sometimes you don’t even really have one. But there’s a lot of traveling right now for press to promote Draft Day.

Q: What are you reading right now?

TW: Just magazines. I’m just traveling so much. It’s always just magazines and rest. This one right here I was reading… Town and Country, I think it is. It’s fascinating material. It’s riveting. Something about your exchange policy when it comes to selling jewelry. I’m curious. I’m a curious person, I guess.