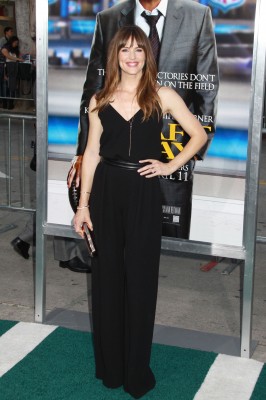 Mother of three Jennifer Garner shows her beauty in Draft Day, in which she plays Ali, the girlfriend and co-worker of the general manager of the team, Sonny (played by Kevin Costner). As a sports fan herself, she reveals what sport she and her family is into, and the reason. 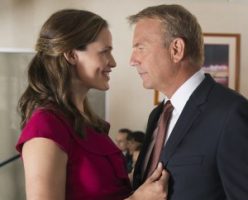 “We’re really a baseball house – as much as I love baseball and have grown to dream about what happens for the Red Sox. You can’t help it! But to me, sports are like a soap opera. When I first was dating Ben, I’d never watched baseball. I didn’t really care, I may say, about baseball. But if you watch three or four games in a row, you learn just enough to kind of hook you in. And it’s the same as a soap opera, right? If you watch three or four, you get just enough of a story line to kind of grab you, and that’s why people are so into them. But it’s the same thing, and now, I’m totally addicted to baseball. But believe me, when the playoffs happen, it’s all Tom Brady, all the time.”

Ali is based on a real woman who worked for one of the NFL teams. Since Ali wears suits and high heels, is that comfortable for Jennifer who is usually chasing around her daughters and son? 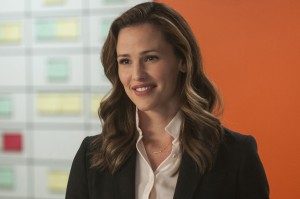 “Megan Rogers, my girl, she dresses very professionally every day, but for the actual draft day, she said everyone the whole day feels a little bit like a party, that everyone dresses up a little bit. So we took that and had my character wear heels that she wouldn’t normally wear to work on an everyday basis, and her skirt’s a little shorter. But as far as wearing them every day, I will tell you that I finished the movie before the guys did, and after my last take when we had hugs and kisses all around, I took off those high heels. And I put them on top of the monitor, and I said, ‘These are for you. I never need to see them again. They’re all yours.’ I hope to never see them again. Because it’s one thing to wear heels for a day of work, but when you’re shooting a movie, by sometime after lunch, when it’s around 8 o’clock at night, and you still have a few hours to go, you feel like no one knows the pain of my life! But I survived. My feet survived, and so did the heels.” 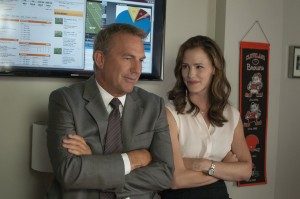 Ali just told Sonny she was pregnant on the morning of draft day. She herself has also been confused about what she wants and has had doubts about her mothering. How does Jennifer compare her own pregnancy experience to that of Ali’s? Is it very different from her real life?

“It is. I mean, I really understand what it is to be a mother at this point, but I certainly remember the feeling of being pregnant. Ali was a step removed, because I was a little girl who grew up playing with dolls and couldn’t wait to have a family. And Ali is saying, ‘I’ve only ever thought about football, and I’ve never thought about being a mom.’ But the fact is, playing with dolls or not, I knew as much about being a mom as Ali did. And I think your first pregnancy, you’re just jumping ahead. You see a kid having a tantrum, and you’re like, ‘I don’t know what to do with that tantrum,’ or ‘I don’t know what to do when they’re 13 and they don’t like me. How do I keep them from trying drugs?’ It’s really hard to just stay in the moment and say, ‘Okay. I only have to deal with the kid in front of me, and what do I need to do for them right now?’ And luckily, you grow up with your kids, so I have a lot of love for Ali because I definitely remember that feeling. And I didn’t have to work hard to draw from that.”