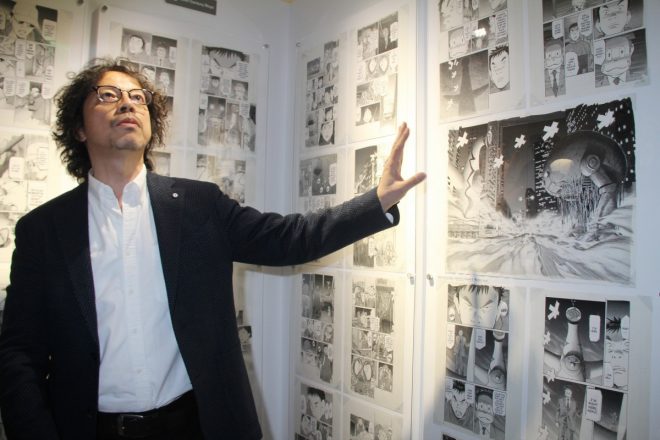 If you are a fan of Manga, you have probably heard his name or read his book and if by some chance you haven’t heard about him yet, don’t worry you will soon.  Naoki Urasawa, is a musician and artists who has been labeled as one of the artists who changed the history of manga. He has received the Shogakukan Manga Award three times, the Tezuka Osamu Cultural Prize twice, the Kodansha Manga Award once, and was selected by the Japanese government to present exhibitions for the Japan House at three select locations around the world, that began in Los Angeles in January.  We caught up with Japan’s national treasure at his LA exhibition and in this exclusive interview we get the history behind the hype.

Q: What is the appeal of Manga for you personally?

I think one of the beauties of manga is that only you need is pen and paper and you can express and depict what movies would take hundreds of millions to do, like travel to different locations. All that you can do in your room with a pen and paper and that speediness I think is what makes manga really appealing.

Q: Was there any moment you thought about quitting?

I’ve been illustrating since I was four or five years old, so I don’t really think there is any moment where I thought I was gonna quit. It’s something that I’ve done all my life and just been with me, so it’s kind of an extension of my hobby, I would say.

Q: What is the secret behind your inspiration to come up with new ideas?

I believe inspiration is everywhere and actually I get inspired and have ideas when I’m in the bath, when I’m getting out of the bath, drying myself off. I think that ideas are everywhere and it’s whether or not you are perceiving them and are able to catch it. 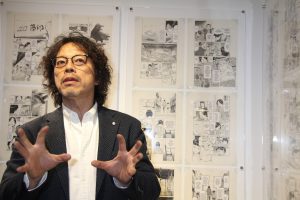 Q: What is next for you?

Right now, I am attempting to depict the life of very interesting and amazing woman, and how accurately I can, its a new serialization that I have right now. How accurately I can do that is a big challenge for me going forward.

Q: Are you willing to do anything out of manga?

I’ve always had a background of music, so hopefully, this year I can put my third album out there, and also some radio programs as well as a TV show I’m producing in NHK called Manben where we kind of work people through what manga is, and I’m co-producing that as well.

Q: When trying to connect with you I learned how incredibly busy you are. What is an average day like for you?

I’m always doing something when I’m awake, so from when I wake up, until when it’s over I’ll probably push myself to do something.

Q: What would you recommend or your advise be for an artist that wants to begin creating manga?

Naoki Urasawa’s exhibition “This is MANGA – the Art of NAOKI URASAWA” is currently at Japan House Los Angeles. 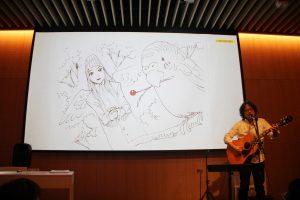 This exhibition will be showing until March 28th, 2019 in Japan House Los Angeles then move over to another Japan House.

Admission fee for this exhibition is complimentary.