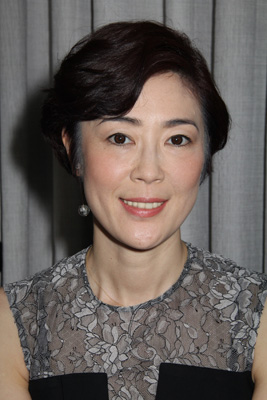 Ever had a “Lost in Translation” moment? If so, you need to see the new film, Oh Lucy! It is the story of middle-age Japanese woman who follows her English teacher to California and gets in touch with her English alter ego, Lucy. We chat exclusively with the star of the film, Shinobu Terajima on playing Lucy and what kind of cultural challenges she faces in her real life being married to a Frenchman. 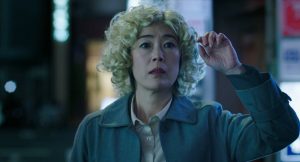 Q: What was your reaction when you read the script for the first time?

I felt Atsuko’s (Atsuko Hirayanagi, director and screenwriter) energy which had been simmering in the script over the years. The script was not easy to understand but as an actor, it is fun to work on because it has various creative possibilities. It was more like, “We might discuss this scene and work it out on set…” So this script was not easy to understand but contained many blanks.

Q: What did you learn from Josh Hartnett (played John)? What did you find about the American style of acting?

I don’t think you can say that all American actors act a certain way but if we’re just talking about Josh, he is a very skilled actor. He knows very well how to take what he is expressing and what is showing in his face and have that be captured on camera. 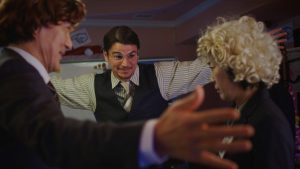 My acting style is to do what I feel while doing it. I hope the camera catches that. But Hollywood actors have the skill to communicate clearly and instantaneously. 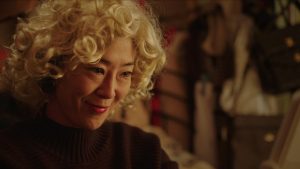 There were cases where that was good and cases where that was bad. Not only Josh, but all the American extras in the film had some quirks. The director apparently chose all the extras from auditions. Seeing the final product, I thought ah, you can see the quirks, see how they show up on screen, even though the actors might not have felt them while filming. It’s this skill that I thought was amazing. 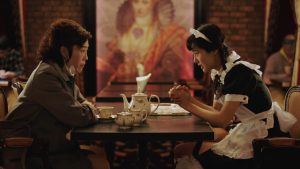 I thought my acting should have been a bit more transparent, but Atsuko deleted those takes where my acting was very clear. I thought those were good! Actually Josh was really good at seeming either troubled or cute and charming at various instances, so I thought he was incredibly skilled at letting his thoughts and feelings show in his face.

Q: Although John and Setsuko (her character) had a language barrier, I felt they communicated very well on screen. Since you are married to someone from another country,  do you feel that helped you translate those challenges to the audience? Also, how do you think some people are able to effectively communicate without understanding each other’s language?

I think because emotions are the same. Emotions like delight, anger, sorrow and pleasure are especially easy to understand without a common language. If you don’t speak that language, you try to communicate through emotion. When I first met my husband, my English was terrible. It was less than English [laughs]. All I could do was smile. Still, I really wanted to see him again. I think things like the flow of emotions will make sense even without words, and my aim is there. I may just be trying to avoid answering this, but I feel like it’s not really a question of understanding language.

For example, when you watch straight plays on Broadway, a good actress will seem good even if you don’t understand English well. You understand them through their presence and emotion. I believe that is the answer. Even if audiences don’t understand the words, I think it’s important that you make the meaning clear. For me, I have my husband as judge for that. He always comes to see my plays in Japan. Then after the show, he asks, “That scene means this, right?” And I think, “oh, my acting reached the audience.” So I am close to meeting the measure. He says to me, “Your acting is very clear and easy to understand, so you should work throughout the world more.” It is my dream to do that.

Q: Could you talk about the challenges of an international marriage?

The challenges aren’t really interchangeable.  Every person is different, plus on top of that, we are adding national, cultural and religious differences. Because the sense of values is extremely different, even though each couple may reach a compromise, there’s an awful lot of troublesome discussion that goes on until you reach that decision. The French especially love discussion so engaging in such conversation is mandatory for my husband. While there may be some frustrating aspects of the discussion, there are also many times when it makes me think, “Oh, right, there’s also that way of thinking.” So you can’t say that it’s generally good or bad. Japan is an island country, so of course some Japanese people still think it’s a good thing if Japan is just made up of Japanese ideas. That mindset is good for keeping the peace and not rocking the boat, but I feel I should see the world a bit more from my husband’s point of view.