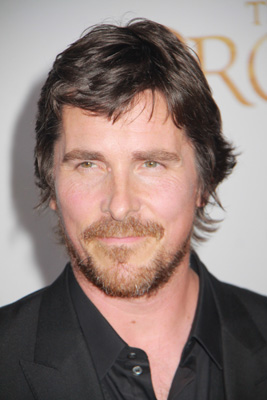 The last time I sat with Christian Bale was the press conference for Out of the Furnace, where he was mildly obsessed with the baby seal charm on my voice recorder. (You can see how it happened on here ). Now, four years later, he still loves this little guy and I am still enamored with this authentic soul and amazing actor.  Keep reading because this is one interview you will not forget.

Well, I had worked with Scott Cooper (director) on Out of The Furnace and we’ve had a wonderful time in making that. I liked his style of movie making and we were told right from the get-go, many people said to us, oh, this will be a tough sell. And I always like hearing that there’ll be some challenge because it means that you’re going to learn something from it. Then it just goes down to an obsession really. You have to spend a number of months working on any film and then there’s months of research ahead of that. If you’re not obsessed with it, you can become bored with it quite quickly. This was a story that seemed to have so many layers. It seemed relevant when we were preparing and when we were making it but then it just kept getting more and more relevant with regards to division and the other, and people’s hatred and animosity towards each other and what was happening in the world. It is a very American story, but I think it has parallels and will be globally understood in every country around the world. 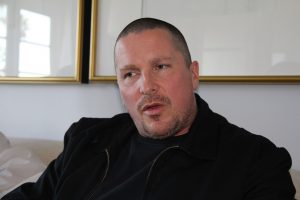 Chief Philip is the chief of the northern Cheyenne and he was a consultant, but became far more important than that throughout filming.

Q: There is a lot of conflict towards the beginning of the film, but then there is acceptance and understanding of each other and a coming together. This is something we need in the current climate right now, do you agree? 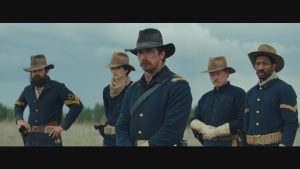 You described it very well. I think it goes beyond that. I think it is more complicated as well though in that Yellow Hawk (Chief Yellow Hawk, played Wes Studi) is defending his way of life, his culture, and his family. Blocker (Captain Joseph J. Blocker, Christian’s character) is attacking and is enacting genocide. They’re both very intelligent men. They’re both superb warriors. But Yellow Hawk has a community, a love, a family. Blocker lacks all of that. He is a very dutiful soldier and he excels at what he does. But he entirely recognizes that he lacks the most fundamental thing that Yellow Hawk has and he also recognizes that if he were in yellow Hawk’s shoes, he would behave exactly the same way. For Yellow Hawk, he never lost a part of himself. He is defending his family and his culture, but he hasn’t lost a part of himself. Whereas, Blocker knows that he has and he knows that he’s become a man who was consumed with hatred, which initially would have been a false created hatred in order to be able to fight the enemy, but then becomes genuine when his friends and his brothers in arms die. But he also knows that’s a personal tragedy rather than an absolute cultural tragedy of genocide, which is what he is enacting as well. So, there’s a great guilt that Blocker has not only towards his treatment of Yellow Hawk, but also a great guilt towards his brothers who have died in combat because he correlates forgiveness and stopping hatred and stopping fighting with rendering that deaths meaningless. And so, it’s a fascinating story. There are similarities with Yellow Hawk and Blocker, but there are many, many very essential differences as well.

Q: You’ve experienced living in other countries, cultures. From your personal experience, what was lost in translation? What have you learned from other cultures?

I think I felt that even when I was in England, because we moved a lot with my family, just troubles that we had and I was rootless my entire childhood. So even within England, I never really felt like I was an essential part of a community and I think that lends itself actually to what I do now and an enjoyment of playing other characters, etc. But it’s exactly to the very point of what I was mentioning regarding Yellow Hawk and the sense of community and Blocker learning that about Yellow Hawk as well. And it was something that I was very appreciative to Chief Phillip (Phillip Whiteman, Chief of Cheyenne) and to Lynette (Lynette Twobulls, wife of Phillip Whiteman) for helping me with because I thought that we would just be learning Cheyenne. He would tell me, and then that would be the end of it. But he wanted me to understand the Cheyenne culture and the way of thinking and how very different the way of thinking is to Blocker. And that informed not only me and my portrayal of the character and made it so much more fascinating to myself, but informed Scott (Scott Cooper, director) a great deal as well in the way that he approached the film. So, we were both very grateful towards a Chief Philip. If you wanted to ask you a question to do with native American culture, but you’ve got no better person to ask then Chief Philip right here.

Q: I’m from Japan. I’m actually a Shinto priest. We believe everything has a spirit. We respect the spirit. Your name is Christian and you’re from a country that typically represents Christianity. But you did Pocahontas, The New World, and now Hostiles. Your character understands the Native American life which is similar to Shinto. So what did you learn from native American culture?

Well, I’d love to hear the similarities between your beliefs and the way of life. You guys talk about the Shinto because I don’t know. I’m not familiar with that. Forget your editor. This is a much more interesting conversation. Your editor will be delighted. She’ll give you a promotion or raise. They’ll give you a raise. One question for Chief Philip. That’s absolutely relevant in what you’re saying. So, you’re a Shinto priest. You know one, one aspect is that, like you were saying is that we are spirits having a human experience rather than the other way around. Is that what you were alluding to?

Q: We believe everything has a spirit…

And so do you feel like that would be a very healthy and necessary thing for the world today?

And that’s what we discovered in having, made this film. We realized just that we had stumbled across something that is vital nowadays. And that Chief Phillip articulates better than anybody else. Asked him a question. You have to look at him, look and ask a question. It is going to be interesting and it will make it a different kind of interview. 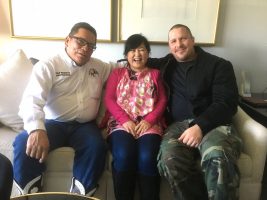 Q: To Chief Philip, what is your perception of how Christian Bale is understanding/portraying that Native American culture?

Chief Philip Whiteman: If you have to defend your beliefs you might want to re-evaluate it. Fear, shame, or tools. Naaman, daman [not sure if spelled correctly Naaman & Daman] down the spirit would become programmed and we become one site, will become like shape and unreflective hurt. The genocide process and hypnosis and amnesia that were in creates this dark manifestation that infects the spirit of all cultures. We are all connected that’s the highest thought process, not just to earth, but to the universe. We are creators. You are a creator. I am a creator. He is, she is, we’re all one in the same. But the lowest thought process is that we are separate from each other. When we come from a contracted back brain mindset, I can hurt you, I fear you, and I can shame you, and I can judge you. That’s the opportunity that we have today to create that shift in perception. I do exercise with Christian to arrive at this neutral ground. What we have in common, not only differences. Would you participate in the exercise?

(Bale) You should do it. Forget about your editor. And forget about time, we can extend.

[Chief Phillip gave me and exercise and Christian also did with smiling to me.]

[During the exercise, Christian whispered me the answer when I could not find the word!]

Chief Phillip: You can’t solve a problem with the same mindset that created it, so if you’re one sided, I would like introduce you to the other side of you that you don’t use. That you fear, strange, whatever label you want to put on it.

Chief Phillip: Acceptance can be a form of submission here. Justify and rationalize it. That’s called insanity.

Christian Bale: So that you don’t get in trouble with your editor and I don’t think you are going to get in trouble with them because they’re going to look and say that’s fascinating and it’s poetic. It’s clearly true, but we don’t know it and we don’t express it very much. But with respect to the editor and her saying you were meant to talk about films. You were not meant to talk about how to live a better life. But that’s what films are all about. What everything is about. Every film is about how do you live a better life. Every single film, no matter if it’s comedy. Whatever it is, that’s what it’s all about. But if you think about it as a film community, we adopt that attitude, you think how much more interesting the world of movies will become. We’re seeing a cultural shift right now in terms of the treatment of women. Now, if you have that with ethnicities as well as gender and just like Washington, if we cease to have a movie industry which is entirely dominated by white men, think how much more interesting the stories are that can be told and the stories that we haven’t heard yet. We’re denying ourselves an enormous library of stories. So maybe your editor will go, oh, well done. You’ve brought it full circle back around.

Final note from the Editor, Jody Taylor. I want to thank you Mr. Bale and Chief Phillips for this interview. As I am editing this profound and entertaining piece, I found myself not wanting it to end. Hollywood needs more of you and your authenticity. We scream for more while for some unknown reason making everyone color inside the lines and as so eloquently said in this interview…You said you cannot solve a problem with the same mindset that created it. Thank you for changing the mindset.

Hostiles opens in select theaters on Dec. 22nd then nationwide on January 19th. For more info, visit the film’s official website at, http://www.hostilesmovie.com/