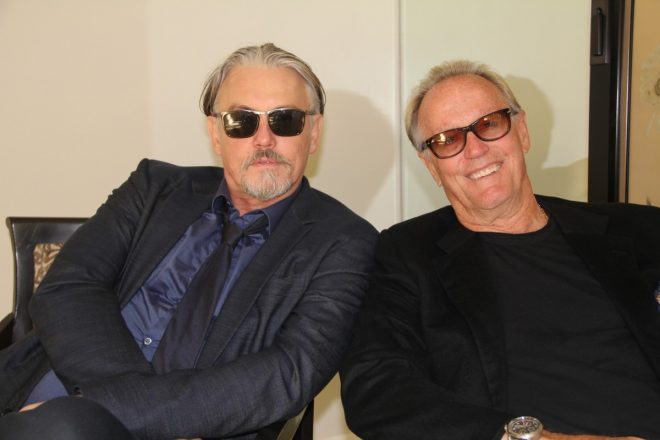 Actors, Peter Fonda and Tommy Flanagan share a common bond on-screen and off, which is their mode of transportation. On-screen, the co-stars saddle up for their new film, The Ballad of Lefty Brown and found fame in the seat of a motorcycle. Fonda in the 1969 legendary film, Easy Rider and Flanagan in the cult hit TV series, Sons of Anarchy. Both men are also avid motorcycle riders off screen. In this What’s Up Hollywood exclusive, we chat with Fonda talked about his love of nature as ritual ceremony for Godzilla in Japan! 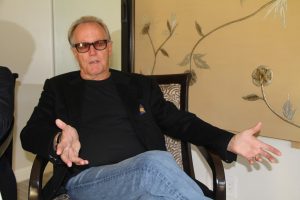 Q: You guys came into this project sharing a love of motorcycles. What’s the charm of the motorcycle that makes you like it so much?

Peter Fonda:  Well I like the look. I liked the idea and the feel of it. And it’s a different kind of horse. Also, riding a motorcycle forces focus. You have to have focus. But once you get into that, that forced focus, it doesn’t mean you’ve risen in fact, you have to keep your shoulders loose in case you get into trouble. Then it’s like, oh look at that eagle over there. Then you come back down and you haven’t wandered off the highway. 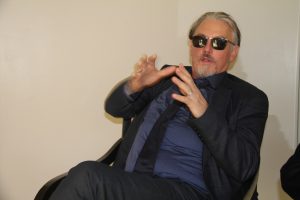 Tommy Flanagan: Which is good.

PF: I have wondered off a highway a couple of times. If you haven’t gone down, you haven’t been riding.

TF: I would have skid marks off my ass.

PF: My whole back. Well this one is stainless steel, titanium, and copper.

TF: That is the latest one. 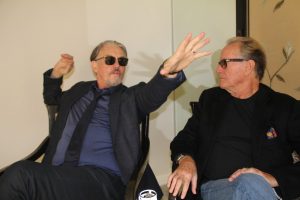 Q: Any injury story of have? I crashed and flipped and landed on my shoulder with my scooter.

Q: Let’s talk about your new movie, The Ballad of Lefty Brown?  What was the preparation like switching from riding from a motorcycle everyday to a horse. Tommy, did you find it difficult to change your accent?

PF: Just from my look at it, Easy Rider was a Western. I wore spurs on my boots. Not everybody sees that, but that’s how I envisioned it and you are out riding across John Ford’s West, that’s how I describe Easy Rider. The Western for me was something very natural. Not only because I watched my father do it but because I lived in a certain way as I was born in 1940. We had to prepare everything for ourselves. We grew all of our own food, we had chickens and rabbits. And that was learning how to be a part of the earth. But it was what my father did. Then he left to go fight in the war. But we had the ability to eat his large [inaudible]. We were growing the best vegetables, the best fruits. We had chickens and rabbits. We never name the rabbits because we knew we were going to eat them. So, this process of being a part of the land was something that was just natural to me. And I did minor Western things. When I finally did Easy Rider I knew I was going to do a Western. Then the next film I made was a Western. But I also directed, called The Hired Hand. It’s something that I feel I am rooted to it. I think that’s what I was saying all about preparing our own food and eating from our own garden. We didn’t go shopping, there was no shopping. I’m used to that and I lived for thirty-two years in Montana on my own ranch. This was something that was part of me. So, I read the script and I’m already there. I don’t have to imagine myself there. I’m right there and I’m thinking to myself this is great. This is really cool. Then I saw the film and I saw how good he [pointed Tommy who sat next] was and I thought, man I hope they don’t try to compare me with Tommy (Flanagan) because he just chops me right off. You think I am BS’ing you, but you know I am not. 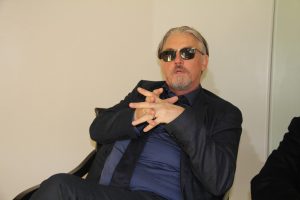 TF: Thanks Peter. I grew up in the wild west Glasgow in the hills and highlands of Scotland. My wild west I supposed was… I grew up in the slums of Glasgow. But we grew up right on the edge of the city. So, you know the buildings? They were close. We had a front close and a back close. The front entrance took you straight into the streets of the concrete and the slums and back entrance was a beautiful green home of Scotland. I had to walk through the streets of gang warfare the craziness. And then I’d be in the back walking through the hills. That was my West, that’s where we are. 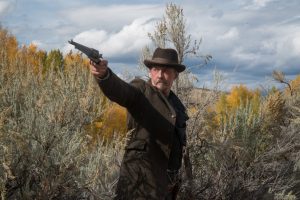 Q:  Peter, I found it interesting that Bill Pullman’s character got his name, Lefty, because he didn’t like to kill people and left them alive. I have seen Westerns in the past but now view them a little different because of the current climate with gun violence. What are your thoughts on present day gun control?

TF: With the movie and what is going on in the current climate with guns, I don’t equate both of those things together. That was the wild west. I didn’t grow up in a culture of guns so all of this gun violence to me is mind blowing. I mean, it’s disgusting and it’s mind blowing. But I wouldn’t compare it to the Western that we just shot. That how people would survive before. 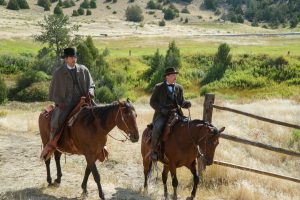 PF: I have, it’s not a formula, it’s an attitude. That violence, when it’s expected, is excepted and if we expect violence it doesn’t mean a thing. But if you don’t expect it; so if you see John Wayne here and Clint Eastwood there lead is going to fly and people are going to die. But if you do this where you don’t expect this to come from nowhere even if everybody is carrying guns certainly it’s unacceptable. And that’s when you have to deal with violence as an audience. That’s how you have to think about it and it becomes much more difficult to deal with it when you don’t expect it to come.

I knew you knew what was going to happen. In The Hired Hand, you didn’t. In Easy Rider, you had no idea that that was going to go down. In The Ballad of Lefty Brown, we’re all carrying guns and yes, I point it at the top of the film and I save time to put it down. Then I hang him. This is really wild. It’s so bizarre and I don’t think either of our characters have been firing at each other or anybody else for several years. [inaudible] people this is a bar fight or something. The way I looked at it, we had graduated from that gun slinging attitude to trying to keep a ranch coming, get the horses where they should be, make sure nothing happens over here. And it wasn’t so much as shooting each other but once I get killed in the assassination it’s all about jail. 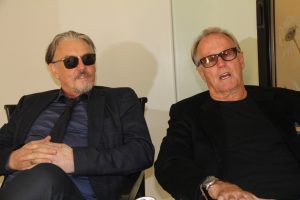 Q: Do you think society needs to be better in communicating our differences?

PF: One of my favorite Japanese meals is shabu shabu. How can you go into a shabu shabu with a knife? It doesn’t work. Everybody sits around and you eat everything including the soup at the end. I use chop sticks.

Q: What was the most interesting experience you have ever had living in different countries?

PF: Being able to learn the culture enough to fit in with the culture. Yeah, I have many friends in Tokyo. I’ve been skiing in Hokkaido at night in the trees.

TF: Oh of course you have. 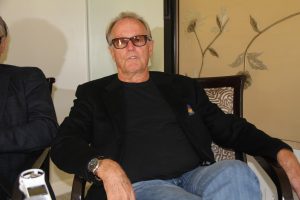 PF: It was easier to do than it was living in Montana. But I’m wearing my cowboy hat. A friend of mine who is a great photographer, Katsura Kuragami, and he’s just great. Of course, getting to know, Kurosawa (Akira Kurosawa, Director) and Kon Ichikawa (Director) and some of the great directors and great editors. I was shooting in Toho Studios, and to play a joke on the crew, every time I’d come in the morning I’d excused myself then go out to that big tank, pool of water and I would do this whole ritual. I would just make it up. I would do this whole ritual waiting for somebody to come in and ask what are you doing you do this every morning, what are you doing? Just waiting for that. What are you doing?  This is the birthplace of Gojira (Godzilla). This is where Gojira was born. I pay the respects. I don’t want Gojira to eat me. And they would laugh and laugh and then have me try to do it to somebody else. This story got down to Kon Ichikawa who was shooting in several of the soundstages down. He said do you go every morning, using an interpreter. He said that is hysterical. I was so happy to do make people laugh.

The Ballad of Lefty Brown is currently playing in theaters nationwide.