“Star Wars: The Last Jedi” star Mark Hamill is the man in black…socks. 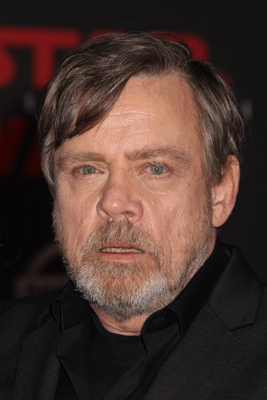 Star Wars vet, Mark Hamill was on a humorous stealth mission as he answered questions during the press conference for Star Wars: The Last Jedi reminding us why he is royalty in the galaxy.

Q: For some of the cast who was in Star Wars: The Force Awakens, how would you say this film feels differently?

My answer will be in direct proportion to the amount of screen time I have. [laughs]

Well, you’re assuming that I train Rey. Do I?

I have to be really careful. People say, was it difficult to pick up and wield a light saber again, and I go, do I pick up a light saber? [laughs] I can promise you my part is twice as big as it was in The Force Awakens. [laughs]

Q: Having played the young farm boy who becomes a hero and now returning to that character all these years later, what journey, without obviously giving it away, but what arc is left for a guy who’s been through what Luke Skywalker has been through?

I don’t think any line in the script epitomized my reaction more than this is not going to go the way you think. And Rian (Johnson, director and writer) pushed me out of my comfort zone, as if I weren’t as intimidated and terrified to begin with, but I’m grateful, because you have to trust someone and he was the only Obi Wan available to me, not only in my choices as an actor, but my choices in sock wear. Because – well, I was so embarrassed. I looked at my drab black socks and I said, curse you, Rian Johnson, I’ll get my revenge.