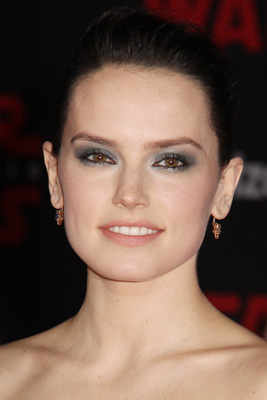 After seeing Star Wars: The Force Awakens, I was elated to see the “chosen one” was a woman who would now be amongst the leading characters in the new Star Wars saga.  The character Rey, played by Daisy Ridley, returns again for the newest Star Wars series installment, Star Wars: The Last Jedi.

During the press conference we hear from Ridley directly on what that is like and her thoughts on the franchise’s first boss lady, Carrie Fisher.

Q: How would you say this film feels differently from Star Wars: The Force Awakens?

I mean, the biggest thing for me when I read the script, because you know, even though you’re trying to avoid what people are saying, it’s hard to, and because people responded well to John (Boyega, played Finn) and I as a team, I was a big nervous about not being a team so much in this one. So I think for me personally it was a challenge. The film was a challenge and I don’t know what it was like for anyone else, but to be in different combinations of people. So in itself, we’re in different situations, we’re with different people that we are learning about, we’re meeting for the first time, so yeah, felt pretty different for me.

Q:Without revealing too much so we can avoid any spoilers, can you provide a little more details on just how it felt different?

As an actor, I would much more easily draw comparison of similarity, because like I mean, I’m sort of just speaking for me, that I was like real new to this all, and it was first film and all that sort of stuff. And I’ve done smaller films now this year, and I’m like, genuinely it feels the same, like the sets tend to smaller, we’re shot in Prague instead of London, but like it genuinely it’s a small – not a small feeling, but it’s like that family thing, so going into something could have been really scary and being surrounded by people that make it feel really comfortable for me is like the only thing you can ask for. Beause you can only do what you can do. If you’re in a

really safe environment, then you’re able to do more. And coming back like it really felt – it was different obviously in ways because the story’s different, the characters are being challenged in different ways, but the crew was similar. I think it says a lot about Rian (Johnson, director and writer) and our first (assistant director), Jamie (Christopher), actually, like how a set is run is so incredibly important, and what J.J. (Abrams, director and writer for Star Wars: The Force Awakens) and Tommy (Gormley, first assistant director for Star Wars: The Force Awakens) did first time round, Rian and Jamie did this time, it’s just a really happy set, that everyone feels, I think, heard and respected. And so just like in an acting sense, taking everything away, I think the same feeling was captured of love and of everyone trying to work together to make this thing that hopefully other people will love. So I think to me, in a more emotional way I think it did feel more similar than different. 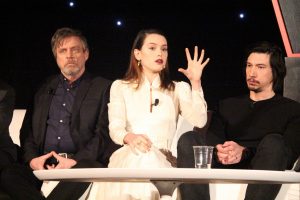 Q: There are way more female characters in this installment which obviously will mean a lot for young female fans. How does that feel to help empower young girls?

I think like as a girl growing up in London, obviously I knew there was a disparity in films but I wasn’t so aware of it, like growing up in a liberal household. I was never really made to feel any one way. So when I got involved I didn’t really – like, I knew it was a big deal, but the response was so beyond anything I could have imagined, that I’m still like – it was only afterwards I was like, oh, oh yeah. And it’s not like I ever took it for granted or anything but it was just so monumental, the response and how people felt about it, and obviously that’s a testament to Kathy (Kstheleen Kennedy, producer) J.J., Michael (Rejwan, co-producer), Larry (Laurence Kasdan, co-producer), everyone who created the characters in the beginning, and I think what’s great about everyone is it’s not like she’s a girl, this is a guy, this is anything, everyone’s just, it’s just great characters that happily are falling into broader categories now, so I’m thrilled. Yeah.

What I think is amazing about the film, is that every character – I like don’t have a big film knowledge or anything, so I’m not oh, god, this is – so I never understood the structure of what the Star Wars was and what anyone was trying to fulfill, so just as me watching it, I think you really follow the story because you’re with every character,

like everything you need to see is happening on screen, you’re not seeing things happen off screen, that have happened off screen, so people asking questions on screen, they’re getting answers on screen, they’re having their adventure on screen, so you’re with everyone every step of the way. So how the story’s unfolding. And I think it makes for compassionate viewing because you’re really understanding both sides, why people are doing the things they’re doing, and how it’s being fed from everywhere and how things collide and the consequences of people’s actions, how they’re directly affecting other people.

Q: Obviously the death of Han Solo is a huge moment in Star Wars: The Force Awakens, and I’m wondering how impactful is that, without spoiling anything, to the characters who knew him in the last movie and the previous films? 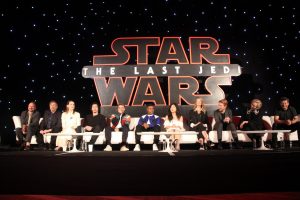 I think this is the beauty of having storylines that are sort of happening in tandem and affecting each other, because I would say that Rey (Daisy’s character) at least is very much affected by it. In the first – like, Rey, as a character has been alone for a really long time and she’s really open to like love and friendship, so Finn and BB-8 come along and it’s like this amazing adventure. And then Han, like without trying to, she seeks

something from him because there’s an intimacy and there’s a sort of figure of something she’s never dreamed of for her, that gets, you know, snatched away, and she’s understanding everything’s new to her, so she’s understanding things in a different way, and luckily for me, because I was trying to get to grips with everything going on, and then Rey’s trying to get to grips with everything going on. So for Rey at least there is some time. Everything’s moving forward but she has some time to ask questions and wonder what it is that would have led someone to do something like that, and also how that directly affects the world around her, because yeah, and then you know, she’s worried about Finn at home, so I would say she’s maybe a little more affected, at least emotionally on screen, than the others. 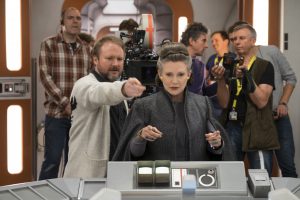 Q: Do you have any thoughts on the impact of Carrie Fisher and Princess Leia in pop culture in general?

I don’t think I can really follow that, except to just say Carrie’s daughter Billie is I think all of those qualities. She’s smart and funny and shameless and wonderful. And I think Carrie bringing up a daughter obviously with Bryan (Lourd, Billie’s father), bringing up a daughter who is all of those qualities and then some, in this world, if that’s what she did, you know, just her being her, I think it speaks volumes to what she did as her in the spotlight and also her as Leia.