Michelle Williams is a woman who refused to fall apart in “All the Money in the World”. 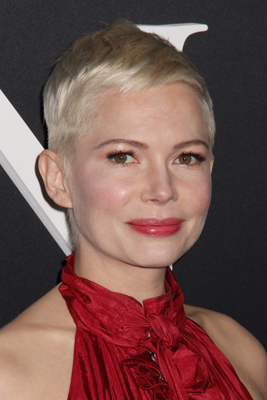 Real life single mother, Michelle Williams plays single mom, Gail Harris, in the new film from Ridley Scott, All the Money in the World. In the film, Harris’ 16-year old son, John Getty III, is kidnapped and she tried to convince his billionaire grandfather, Jean Paul Getty, to pay the ransom.

Williams shares what it was like playing in a film based on actual events and how she embodied the woman who was relentless in getting her son back.

Q: What did you do once you realized there was actually some footage of Gail available online? 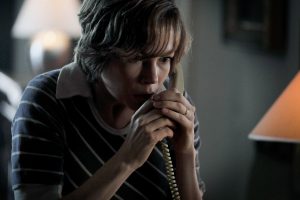 There was only a couple of clips of her online, two or three and they really became my touchstones. I spent a lot of time working on them with a dialect coach and breaking apart the vowel sounds and understanding specifically where that kind of a speech pattern comes from and I would always use them. They were a sort of a beautiful…you know when you have a weekend off and to be able to come back to one of those clips just sort of put me right back into the pocket of how she carried herself, how she spoke, how she moved her mouth. How specific she was, how intelligent she was. They meant a great deal to me.

Q: Can you talk about the challenges of playing a woman who’s fighting her father-in-law? Wanting to rid herself of him and yet dependent on him and while going through the agony of not knowing what’s happened to your son. 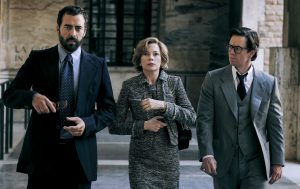 The way that the script was conceived was of a woman who refuses to let herself fall apart, a woman who keeps it, who takes great effort to keep herself together because falling apart won’t get any closer to the ultimate goal, which is to have her son back. And that was at times one of the hardest things to do. Was to sort of to keep your wits about you, to stay as sort of strong and as steely as possible when confronted with these circumstances that are so wrenching. That scene that you mentioned going to a newspaper, to look at an ear, there are these kind of like out of body experiences and as an actor and as this woman to keep her intact was one of the biggest challenges. Because falling apart isn’t going to get her anywhere. It’s not going to get her any closer to having her son back. So, I would say that was one of my main goals. 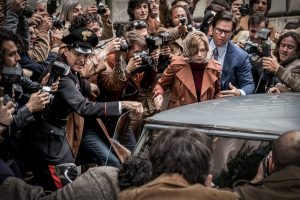 Q: The paparazzi are so scary in this movie, were you having flashbacks of  the experiences you personally have had with the paparazzi?

I was totally devoted to Gail. I mean, I don’t feel like myself or think as myself or I had Gail’s struggle on my mind. It jarred me as Gail, it upset me as Gail. But again, she has to go through so much in this movie. So much that’s unfair. So much that’s undo. So much that just shouldn’t have been. And she’s doing it essentially alone. She and Chase (Fletcher Chase, played by Mark Wahlberg, actor) form a kind of partnership or kind of friendship at a certain point, but she’s essentially taking all of these hurdles by herself and has to really prove herself steely and worthy to be taken seriously. She is in a man’s world and unfortunately to an extent has to play like one of the boys in order to have any kind of authority in these really tough rooms.

Q: Could you compare and contrast the two moms that you play this holiday season in The Greatest Showman and in this movie?

Gosh, they’re so different. I wouldn’t even know where to begin. I mean, I don’t know what they have in common other than being mothers. That might be where they’re similarities end. The Greatest Showman was like a kind of detox for me. I just come off of doing a really difficult play on Broadway for six months. And then got offered this job with my old friend Hugh Jackman and shot in Brooklyn ten minutes away from where we live. I was told that I could bring girl scout troops every week. Like I was just like, yes, yes. That sounds like just what I need. So, that was that. And this was something very different that required a lot more of me, but I was ready for it, hungry for it, yearning for it. After having had that kind of couch time with The Greatest Showman, I was ready to get back up on my feet and be driven hard again. Which is what we live for, which is what I’m still after all this time, I’m just burning for that kind of unknown. I don’t know how to do this. I think I can do this and I’m going to have to figure it out in the moment in front of all of these people that I admire. But Ridley (Scott, Director) was so great at putting me at ease and giving me the floor. I’d never again and all this time I’ve never worked with someone who has given me so much freedom, who has just opened up the space and said, this is yours. Go be free. It was intoxicating and he would say to me, so here’s the space, I’ve got cameras in places I don’t need to tell you about. Why don’t we just rehearse on film. And so, we would, which is a scary thing to do because nothing is finessed, nothing is smoothed out.

It’s all unknown. So we would do this thing that we would call rehearsing on film and very often he would say, OK, great, we’ve got it. I’d like to move on. And in the middle of rehearsing on film, he would throw an obstacle, a physical obstacle in your way that you couldn’t have anticipated. So, you’d be dealing with something in real time and always somewhere in the back of my head, some sort of like paper airplane would come flying over my head. For my first responsibility is to deal with it as the character, but somewhere in the back of my head, just like the little smile went on in my brain like, God, what is he going to come up with next? And I would get so excited to come to work because it was like the stage, it was like being in a play where it’s real, it’s alive, it’s a thing that he’s most interested in capturing. It’s the thing I’m most interested in exploring. What you’ve seen the movie there’s a lot of that was our first take, it was like, which has a real aliveness to it, but it’s never been done before and it won’t be done again, and things happens, surprises, spontaneity. So, it was a very exciting workplace and I’m a little lost without it.