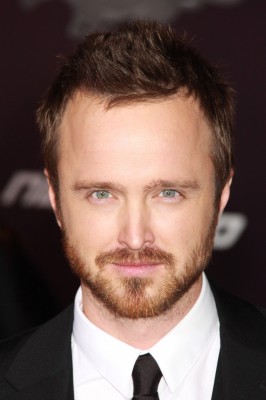 Aaron Paul has had success, fame, and fortune; yet through it all the star of  Triple 9 seems to have stayed grounded in who he is as a person. He is easily one of the nicest and most down to earth people I have ever interviewed. In fact, Aaron Paul’s personality leaves you to wonder why all successful people in the entertainment industry can’t be like him after they achieve success –so I asked him and his answer is amazing! He also shares his perspective on girls bullying eachother, his thoughts on becoming a father, his audition for Breaking Bad, and the possibilities of seeing him in Better Call Saul.

Q: I understand your wife, Lauren Parsekian is working on a campaign to understand and reduce girl’s bullying. Tell us about that and what you have learned being around it.

It’s impossible to ignore as a human being. Not to see that sort of competitiveness at a very young age. The cattiness per se, but I definitely have a deeper look inside of that world ever since meeting my wife. And that’s one of the reasons I was so attracted and drawn to my wife. It’s what she’s dedicated her life to do. She started Kind Campaign and did a brilliant documentary called Finding Kind. It really is all about travelling the world, talking to young girls, trying to understand why young girls treat each other so badly at such a young age. And it’s really the lack of communication at that age. At that age you’re not strong enough, you’re not mature enough to apologize. You’d rather just walk away from a friendship than to have the courage to apologize and save that friendship. And you see that all the time. It’s a crazy thing. And what her organization is doing is really starting this dialogue. She’s written an incredible curriculum for schools to follow. She speaks in numerous schools throughout the year.

Q: So, you have several nieces and nephews. How about yourself?  Any plan to start a family?

We’ll see. We’ll see. I mean I would love to just see Lauren being a beautiful mother. She would be the best mother ever. If I had any kid–if I had a daughter I’d give that daughter anything she wanted. I’d spoil her to death.

Q: Breaking Bad was a game changer for you– what was the audition like?

My Breaking Bad audition– I wasn’t even supposed to be in town. I was supposed to be in the Berlin Film Festival for a film that I was starring in. And last minute I just had this weird feeling about going to Berlin for some reason. I don’t know why. And I just cancelled the trip. The producers were upset. The director was upset. I literally told them two days before we were leaving, “I can’t come anymore.” And I stayed in town and I got the audition for “Breaking Bad”. I think maybe that was the reason because I would’ve been gone for this casting. They said, “Hey, since you’re in town you should go out for this meeting.” And so I read the script. It was easily the best pilot script I ever read in my life and the deal was they wanted us to pick two scenes from the script to study for the audition. And I went in. I met with Melissa Burnstein. And Vince Gilligan and the casting directors.

Bryan was not there. I think Bryan was just doing his deal. But I auditioned with them. The moment I walked in the room it was such a long room because I had worked with Melissa before. I had done “X-Files” and Vince started talking to me about “X-Files”. And we just really hit it off. I did the two scenes. Vince gave me another scene to work on and I went out in the hallway and I worked on it for probably a good 20 minutes while they were seeing other guys. And I went back in there and did the scene and I found out on the way back to the car that I was testing for the show. And so, Vince was in my corner from that moment. He knew he wanted me. They had four guys that ended up testing. But he was in my corner. I tested. I ended up testing against three other guys a week later. And they had me wait a good solid two weeks to wait to hear the answer whether or not I got the job. The studio was not convinced that I was the right guy. Sony was not convinced. AMC wasn’t really convinced. But Vince finally pulled his ace card and said, “I’m not doing this show unless you hire Aaron.” So, I really owe Vince my career.

Q: Many are hoping to see you guest star in Better Call Saul, any chance that will happen?

I don’t know. I hope so. It is so brilliant. The second season premieres in just a few days. I’m so excited about it.

I’m in. For sure. Who knows if that’s already happened or that’s going to happen in the future, but I am absolutely entertaining that idea.

Q: In your pursuit of becoming a successful actor, you have found fame, fortune, and have some pretty impressive hardware in your trophy case.  While other actors who find the same success become stand-offish, presumptuous, and engrossed in their egos, you have remained approachable and a regular nice guy. What do you think the difference is?

Well, that’s upsetting. I think a lot of the times it just goes to their head. I am so blessed. The fact that I get to sit here and talk to you about what I love– It’s a dream come true. I think a lot of people say, “Money changes people. Fame changes people.”  I don’t think it changes people. I just think it brings out their true colors. I think deep down you’re always kind of who you are. You’re kind of who you are at a very young age and then you know, you’re affected by your surroundings and your life, but with fame and fortune I think it sometimes brings out the true colors in people.

Q: Breaking Bad made you a fortune! What was one of your first big purchases?

[Laughs] I gotta tell you one thing. I didn’t come from any money. My family didn’t have much money. My parents rented homes my entire life. My home that my family lived in before I went to LA was the first home my family started paying a mortgage on. And I–right before Breaking Bad was at the lowest of the lows. I couldn’t pay my bills. But I’ve never asked anyone for anything because this was my dream. It was the first time I ever asked my family for anything. I said, “Could you help me with my rent?” And they said, “Of course.” But I knew that this was a huge thing for them to do. They paid my rent three months in a row. It was $1200/month. It was $3600. It was just really taking a lot away from their savings and their retirement fund. And this was my dream they were paying for. And then I got Breaking Bad. And so the first thing I did was pay off their house with the money that I had. And that’s what it’s really about. They were so supportive of me from day one emotionally and then financially. So, it was the least I could do. So, that was the thing.