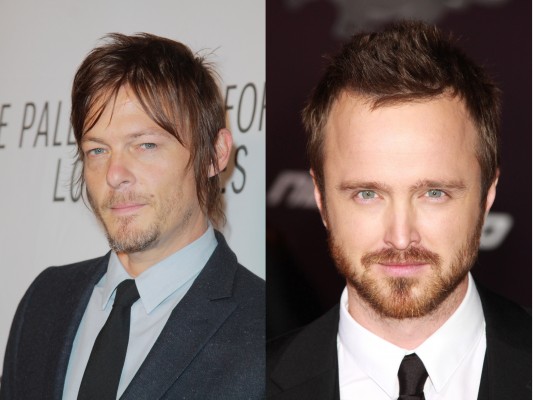 Norman Reedus and Aaron Paul play brothers in the new film Triple 9, while off screen they have known each other for years and have become friends.

We find out when the bromance began and Norman shares juggling his filming schedules Triple 9 and The Walking Dead, and his funny and bizarre encounters with fans. 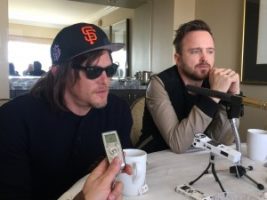 Q: You two are old friends. How did you guys meet? And how long ago was that?

Aaron Paul: Grindr. No. I don’t know. It was so many years ago.

Norman Reedus: I’m pretty sure I have Alzheimer’s right now.  It was a long time ago. I don’t know. I’ve gotta say I’ve known Aaron for at least 15 years.

Q: So while you were both coming up in the business?

Aaron: I think it was really crossing paths. Mutual friends. And it was before I ever had an acting job. When was The Boondock Saints? It was ’99 I want to say.

Norman: Yeah. It was right around that time.

Q: So, were you acting as an actor at that time?

Q: So, neither of you were working as an actor?

Aaron: I think he had just done The Boondock Saints and I had been living in LA for a couple years. I think I had maybe done some commercials, but that’s pretty much it. 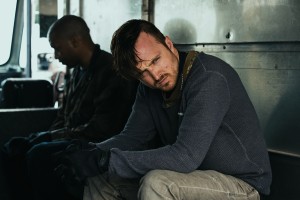 Q: What was your first attracted you to this film?  Was it the fact that you’re going to be working with each other?

Norman: I think it was John (Hillcoat. Director) first off. I mean, for me, John is one of those directors that everybody wants to work with. You know, so. And then you read the script and you hear who’s in it and you’re like, “Holy balls.” I was nervous. That’s a big cast of awesome people. Plus, to work with Aaron is great. I have a little slice of history with my friend. It’s pretty awesome.

Aaron: Yeah. What he said. The first thing you look for is who’s directing the project and how can you not be a fan of John Hillcoat’s. And then you read the script and it’s just a beautiful, intense story, and you know that John is really going to humanize it. And then you have this brilliant cast of characters. It’s great.

Q: Aaron, you play a guy who is just a mess, did you enjoy this character?

Aaron: My character in this project–he’s going through a lot. At the beginning of this story he’s got a lot of issues he’s dealing with. You find out he left the force because he committed a suicide by cop and he’s feeling the ramifications of that. Then he just goes through this downward spiral. I tend to love playing characters with some sort of emotional struggle. I like playing the bad guy that has some sort of heart. He draws the line somewhere.

Q: Norman,  you were working on this film at same time you were doing The Walking Dead, what was that like?

Norman: Luckily, it filmed in Atlanta so it made it much easier. I don’t know if you watch the show but there’s a scene with Carol and I in a van overlooking a bridge, where we fall off a bridge in the van. So we could see each other. That set was right over there so we could see each other. So I go to this set and slick my hair back, put on the blood and go to this one, put on the tattoos. I’ve shot in Atlanta a lot, obviously, but it was cool. John was very detailed with how I spoke in this. He wanted me to be very calm. And then I go to the other one  (The Walking Dead) and I’m just growling and stabbing people in the face. [chuckles] It was nice to go back and forth, to be honest. A lot of times, I’m offered movies and I can’t do them because there’s no time. So it was nice to step away from my day job and see all these guys, and this caliber of actors and jump into a whole new world. It was like a working, mini-vacation.

Q: Norman, you seem to be doing most of your work in Georgia versus LA as well as living there, are you planning to return to LA soon?

Norman: Well, I live in New York. So (I go) New York-Georgia, New York-Georgia, and I come out to LA quite a bit. I’m also doing another TV show now, which is why I sound like this (hoarse). It’s called “Ride,” and its sort of a travel docu-series with AMC. So we did Florida, we did up the coast of California. I just did Vegas and Death Valley too on dirt bikes so I was swallowing sand for a week so that’s why I sound like I do. As far as coming to LA for movies and stuff, sometimes, if we can fit it into the schedule.

Q: When you mention the name “Norman Reedus,” people respond with an intense… “Ohhhh!” What would be something fans would be surprised to learn about you?

Norman: I’m kind of a neat freak; my apartment is super-clean. I love my cat. I don’t know. I try to be a good dad. I’m just a normal dude.  I think because I have an angry face, people think I’m a mean guy. But I’m really a sweet guy.

Q: What is the best way for a fan to approach Norman Reedus?

Norman: Don’t try to lick me. I was just bitten recently. Don’t bite me.

Norman: Yeah, they went to take a picture and went (demonstrates how the fan bit him) and bit me here (points his chest.) And I went, “Ahhhh!”

Q: The Breaking Bad fans didn’t do that, did they Aaron?

Aaron: No, I’ve never been bitten.

Norman: They call you “bitch,” though.

Triple 9 is on thears.