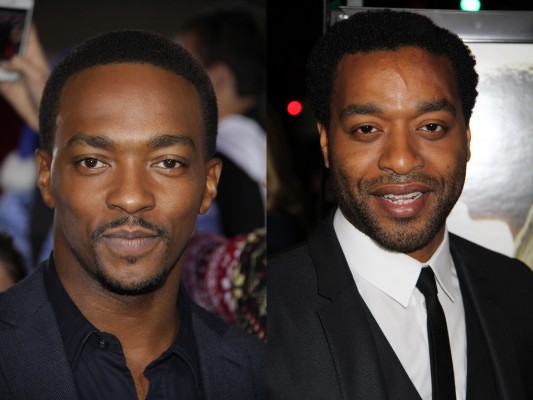 Anthony Mackie and Chiwetel Ejiofor both play dirty cops with a very dark side in their new movie, Triple 9. Yet in our interview, they are themselves – the extreme opposite-especially Anthony who couldn’t stop cracking jokes and making Chiwetel and I laugh throughout the interview. As we talk with both of these amazing guys, they reveal what drove each of them to do this film. Also, Anthony shares what advise he gave to new comer, Chiwetel when he took on Marvel Universe. 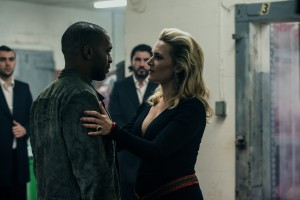 Q: What attracted each of you to do a heavy film like Triple9 ?

Chiwetel: I’m a huge fan of John Hillcoat’s films and as soon as I saw the name Anthony Mackie…

Anthony: C’mon. What? You know you were attached four years before I was. [laughs]

Chiwetel: I think John makes incredible films and he has a totally immersive quality to his filmmaking. They are so energized. He’s one of the complete directors, and that’s always exciting as an actor. I know that this is an adventure. I know that it’s going to be an experience for the audience. When we first spoke, we spoke about the high scenes, the long scenes. Long takes. What it would mean to rob a bank. Why Straight Time, the Dustin Hoffman movie, was so influential on this movie and that beginning because Dustin Hoffman is extraordinary in that film. And that real time heist–one take–walks in off the street, starting smashing the glass and that jewelry, and becomes more and more frantic. You understand character in the moment of the heist. You know who he is as well is what is happening. And you’re caught. We both loved that movie.  We talked about The Gambler. He has a panorama understanding of cinema and wants to engage and audience right from the get go and tell the story or characters. And I think he’s consistently done it incredibly well. The first film I saw of his was “The Proposition.” I was blown away. I saw it in Islington in North London ten years ago or fifteen years ago. I just thought that this was an amazing voice in cinema. He has a populist sort of idea in the way he approaches cinema. He wants people to enjoy the films he makes, but he’s also an extraordinarily detailed narrative story teller. He’s writing a novel. 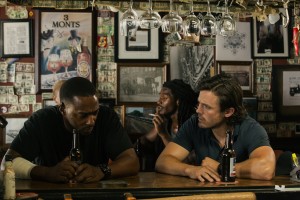 Q: What would you like to share on the current climate of cultural representation in films right now?

Anthony: I think right now we’re at a very interesting cross road in film. I’m very intrigued by the growth and the development of the female character in film. I feel like now if you look up television…if you look at the Oscars, the best performances of the year were given by the five women who were nominated.

Anthony: The women who were snubbed– Cate Blanchett– because she was bananas in Truth, which I feel was the best movie of the year. And I think that’s because about ten years ago women stood up and said, “Enough is enough. We have a right to tell our stories and make our own movies.” And that started doing it.

Anthony Mackie: She was banana’s in everything. It was just her year. But that being said I’m very proud of the climate of film today because I feel like those who want their stories told are getting up and telling their stories. 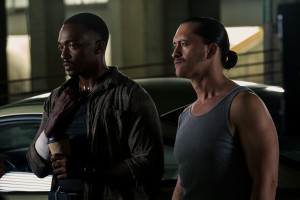 Q: Chiwetel, you were in 12 Years a Slave which was a big Oscars film. How do you feel about the Oscars?

Chiwetel: I think that it is really important to carry on a really strong narrative about diversity and how we can continue to better represent the societies we live in. It’s good for our industry. It’s good for our media. It’s good for the society itself. If we all have a very deepened, complex understanding of each other–I don’t think there really is another opinion. I haven’t heard another opinion that is like, “Oh. No. Less diversity is really important.” There’s no intellectual position that comes out of that, but is of the other persuasion. I have no heard a single person talk about that. So, I think we all agree. We all agree that diversity is massively important, it makes for better films. I’ve loved cinema all of my life. Yes.  I also am aware that in the context of that the majority of the stories come from the perspective of white men. That’s complicated ultimately because there’s only so much of that information that you can receive before you hunger to see a movie like “Carol”. To maybe understand the world from somebody else’s perspective. And if you can see something from “North by Northwest” to “Back to the Future” and understand the white male perspective in all of it’s categories, then that’s great. But I do hunger for a different understanding of cinema. Different people’s perspectives. Different people’s writing. A diversity in the issues of the language of cinema. We all embrace. Like, why not? There’s no reason not to have that. If something is normative, I get it. But also we progress as a society. We engage with different things at different times. And people that are favored can still be favored. But we can have in addition to them other films that we also really care about and we really love.  I think 12 Years a Slave did that. I think this year Carol and Suffragette did done those things. I think it’s important for the generations coming up they can see films about all of it.

Q: And what about Triple 9?

Chiwetel: And Triple 9. I did a film called The Martian as well which had a very diverse cast. It did massively well. There’s no longer even a financial argument. Everything has been settled about this. The public would like to see films about diversity. We would like to make them. We train and study to do the things we want to achieve. We hope that we can meet that in the market place. And let’s get on with it. And Marvel.

Q: So, with Doctor Strange coming out this November, has Anthony given you any advice on getting into the Marvel Universe?

Chewetel: A 600 page booklet from going through from the contents– “Rule number 1.” No. I’m really enjoying it. And I’m really happy that Anthony and myself and various people–white and black–are also engaged in making product that is full of diversity. Why not?