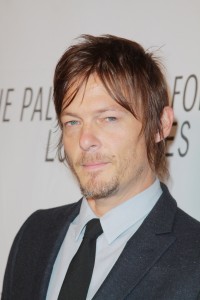 Just in case you can’t get enough of Norman Reedus, we have an EXCLUSIVE interview with the Triple 9 star! Norman shares his experience of living in Japan when he was younger and also shares a story  about his The Walking Dead audition.

Q: You talked about when you were young, you lived in Japan before. How old were you?

I guess I was 17 when I first got there. Off and on for probably a year if you add it all together.

Q: Who’s idea was it for you and your family to move to Japan?

My mother–her husband was a geochemist for an oil company so they moved to Chiba, Moto-Okubo. That was the first place that I went there.

Q: Did you go to college there?

No. Basically I became friends with some people that lived in Tokyo. One guy was in a French band and his father was opening up a French restaurant in the Roppongi (in Tokyo) area. I ended up living with him for a while. I’d come back to the states and then I’d go back there to see my parents. And then a bunch of us who had met there all moved to London. We all moved to London from there. Then I lived in Spain for a little while. A girl (from New York) that I had met in Tokyo came to Los Angeles, and I followed her to Los Angeles. Then all this happened.

Q: Did you have Japanese friends at the time?

I had a ton of Japanese friends. A whole bunch of them. I had a friend who lived in Chiba who sang in a punk rock band out there called Buckingham Kyuden (in Japanse, Buckingam Palace). I don’t know that they’re still a band.

Q: Did you keep in touch?

There was a guy, Ryusuke that I kind of am in touch with. There’s a girl named Mibu who I rarely talk to, but I still like her. And a guy named Takashi. And then I knew a bunch of Americans and French people as well.

Q: What did you do in your free time while you were living there if you weren’t working or going to school?

Hanging out with them.

Q: I know you are an avid motorcycle rider, were you able to do any big rides in Japan?

I hope to do that one day. I’m doing this motorcycle show now, and next season we want to go overseas to different places. Japan is definitely an area that we’re talking about.

Q: Have you memorized any Japanese?

Q: Moving forward to your first big television show after leaving Japan, what was your audition like for The Walking Dead ? Also, you mentioned your character was not in the comic book and you auditioned for other characters, tell me about that.

I went in and I read Merle’s lines, but I had heard that Merle was cast by Michael Rooker already. So, I thought Michael couldn’t do it or something. And then I went back to New York and they had me read more Merle lines. Then when I left there they said, “Frank Darabont wrote a new part for you.”

Q: So, then you get The Walking Dead and it really takes off and before you know it – you’re on a hit show with a good salary; what did you buy first?

[Laughs] What did I buy? I bought my mom a house. In Austin, Texas.

Q: I understand you have a son? How old he is and how is it being the dad of a teenager today?

Q: What do you two do together?

We do lots of stuff. We do father and son things all the time. We go on vacation. We go surfing. We play chess. We talk about girls. We eat noodles. We eat pizza. Normal stuff.

Q: Any motorcycle riding together?

He’s been on the back of my bike. He doesn’t ride.

Q: Besides biking what are you into right now?

Surfing. Cooking. Juicing. (I cook) Breakfast food.  A little bit of everything. At one point I was making miso soup from scratch from miso paste. My big thing now is Eggs Benedict. I’m trying to get that down.

Q: Well your nutrition is pretty on point, what about your fitness, how do you maintain your physique?

Like everybody else. You exercise. It all depends what your day is like or what your week is like and how busy you are. I try to do it as much as possible.

I do both. I have a gym at my house in Georgia and New York and I do both.

Triple 9 is in theaters now.