From Gidget to Doris, 50 years later & you will fall in love all over again with Sally Field in “Hello My Name is Doris” 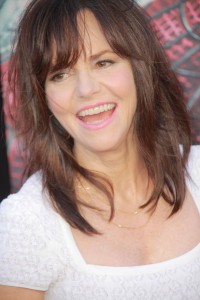 We all know Sally Field plays cute and quirky like nobody’s business. Fifty years ago we witnessed first hand when she splashed on screen as the loveable beach bunny Gidget. Now sprinkle in her dramatic roles over the years like her character M’Lynn from Steel Magnolias and you get the loveable yet complex Doris.

In Hello, My Name is Doris Field plays a 60-something single woman who falls in love with her much younger colleague, John. Along the way movie-goers learn her inner cougar isn’t the only thing hiding in her closet, because Doris is also a bit of a Hoarder.

We sat down with the Hollywood legend to ask if she has  ever been tempted to do a little curbside shopping. Also, who created Doris’ eccentric wardrobe and what she thought stunk… literally! 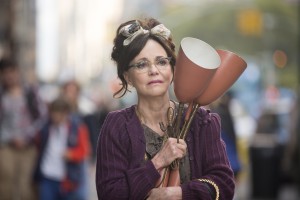 Q: Doris has a hard time getting rid of the stuff she picks up from the street. I just moved out of my apartment and didn’t realize how much I stuff I had collected over the few years. Have you ever been tempted to pickup any curbside treasures?  Have you ever had a difficult getting rid of anything?

I don’t think I’ve ever picked up anything off the street, maybe a penny for good luck. But certainly, being the oldest one up here, I’ve accumulated and accumulated and accumulated, and then I’ve transitioned in my life. I always seem to move at the same time. There’s something going on inside my head and I have to make a physical (transition), pack up and go to another place. You try to get rid of the things that are weighing you down. I’ve done that recently and I regret how aggressive I was with myself. It’s like, “Wait a minute!” Where’s that book? What was I thinking?” Books, I think you just keep books. Unfortunately, I learned that lesson too late.

Q: What was the title of the book you regret giving away?

I don’t remember. It’s been more than one book. I’ve done that many many times. 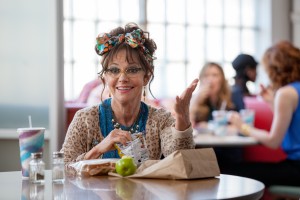 Q: Fans are already chattering about Doris’ wardrobe. How involved were you in helping costume designer Rebecca Gregg in creating Doris’ look?

Totally. Completely. Absolutely (I was) a part of it. It wasn’t like Rebecca knew what Doris looked like. None of us knew what she looked like. Michael (Showalter, director) let us go and create her. What Rebecca did that was remarkable is that she created a roomful, rack after rack, of old clothes that she collected from the old clothing houses that almost don’t exist anymore. Western Costume, and the old Universal wardrobe that is huge and they’re getting rid of so much of it now, which is sad. She went to the thrift shops and Goodwill. She collected racks of things and most of it was disgusting. I mean, really rank and horrible. Rebecca and I would spend hours starting every morning, from the time Universal opened its doors, practically, we did the costuming at the Universal wardrobe department. We’d be there from early morning until late, late in the afternoon, I’d just try on things.

I had it in my head what the hair was. I copied a picture of Brigitte Bardot, and asked if Brigitte Bardot’s hair is too 1961, except hers is blond, and it’s Brigitte Bardot underneath the hair. She had big, swooping bangs, which I cut off to make it just quite not right. And she wore that great big scarf around her hair. So we sort of knew what the hair was. And Doris just sort of emerged from all of those racks of clothes. When I’d put on a blouse and then a skirt, we’d go, “Wait a minute! Wait a minute! I think she’s coming!” It was like sculpting something. She just started to emerge from the marble. And then we’d call Michael and say, “Can you come?”  He’d drive from his office which wasn’t too close, but not too far, and at the end of the first day, we had one, maybe two outfits. And he’d go, “Yeah, yeah, you’ve got it!” By the end of the third day, we had almost all of them. 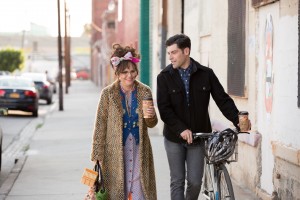 Q: Was there an item you wanted to take home from this movie?

(Sitting next of Sally, is Max Greenfield who played John) Sally wanted the yellow sweater.

No! No! The reason I took it off in the scene where she’s getting drunk is because I couldn’t stand it. “Get it off my body!” It literally had a life of its own. First of all, the arms were so rotten from all the people who had (previously) worn it, I couldn’t lower my arms. It was rank! Every time I wore it, I’d apologize to people and say, “I’m sorry. This isn’t my odor.” Day after day after day. 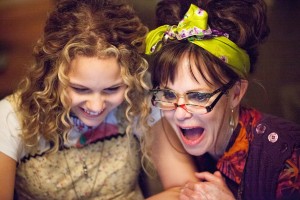 Q: Do you have anything you regret not doing that you can identify with Doris?

We all have things that we look back on and think, “I should have, would have, could have.” For Doris, as opposed to me, she’s coming back to life. This is her first foray really into being fully alive and present. Because even as she tells the story of somebody she knew before, you can tell she was so stuck in some repressed place.  We figured out that her mother must have had a very dominating influence on her. All of her emotions were in her interior. She’s emotionally inarticulate. She doesn’t have a way to clearly express what’s going on inside of her. John is the lure, is the bait that’s calling her out to reach outside of where she’s comfortable. We’re always in stages. That’s what being alive is all about. It’s always about the different stage you’re meeting in your life. It doesn’t end when you’re 16 or 17. It goes on. And then there’s another stage after that. And another stage after that. The challenge is always will you embrace that change? Will you be new again? Will you be willing to be awkward and vulnerable and new again and not know where to put your feet however old you are?

So it’s a coming of age story for someone of age, which is what we’re always doing. (It’s what) John is doing. John and Doris are in exactly the same place. It’s just that our ages don’t link up. But we’re talking to each other and meeting each other and contacting each other as human beings do because we hear each other, and that’s what humans need to do so.

Hello, My Name is Doris is playing in theaters now.