From Twilight’s “Breaking Dawn” to “The Little Prince.” Mackanzie Foy is enjoying the journey 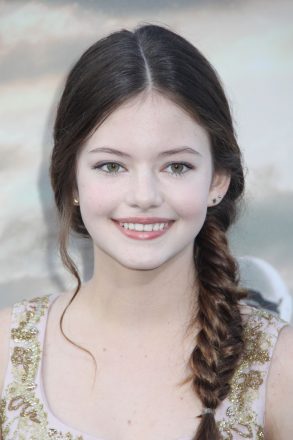 The first time we noticed this beautiful young girl was in her break out role in The Twilight Saga: Breaking Dawn. She played hybrid child of human and vampire whose parents were Bella and Edward. She then went from loveable vampires to scary human beings in the supernatural horror film, The Conjuring. Mackenzie then was included in an out of this world casting combination co-staring in the Sci-fi drama Interstellar.

Now, sixteen years old, Mackenzie brought all of that experience to star in her first animation film,  The Little Prince lending her voice to the leading character, the little girl who feels adventure with the Little Prince. We sit with Mackenzie

Q: You have been involved in one of the most popular film franchises in pop culture history, a film that is loaded with  A-listers, and a horror film that is also building a huge fan base. That being said, tell me what the reaction was among your peers and even your fans when you tell people you’re involved in this project?

When I say I’m in The Little Prince most people think that I am the Little Prince which is kind of funny because when I explain to them what the film is about they are very interested. The book is so much for so many different people and it means so many different things and I think that the film really captures that feeling and when you try to explain that to someone it’s difficult at times, but you have to tell them they have to see it in theaters because it’s breathtaking. Very unique.

Q: How was your experience of  your first voiceover role? Did you find it more difficult having to create a believable character only utilizing your voice?

It was very difficult. I find animation is ten times harder than live action because you have to do all these emotions and all these thoughts but you can’t use your body language or your face. So, that’s really tricky to get certain emotions and certain feelings into a handful of sentences.

Q: What does The Little Prince mean to you before and after the movie?

Well, the book — before I knew about the film — talks to you about imagination and love and death and how to deal with it.  And after it, I just think about all the memories. When I read it I think about all the silly voices you did and when we were filming all the great times I had. Because when we filmed this we filmed it over the span of four years so I grew up filming this. So, I have a lot of incredible memories happened while filming it and my personal life.

Q: How has your experience been balancing your schooling and acting?

I’m homeschooled so that makes it a lot easier. Sometimes when I’m working especially on live action I’ll get behind on school in the week and I’ll have to do it on the weekends. But for me the balance is getting good grades. That’s very important to me. Also having fun with it. You can’t do school and think, “Oh I have to do this.” Get good grades and get your education because if you don’t what’s the point?

I love history. And French and literature but I also really like astronomy. I don’t take it anymore. It was in my past school but I really liked that.

The Little Prince is currently in theatres and Netflix.