Greta Gerwig portrays “Frances Ha” based on her personal experiences 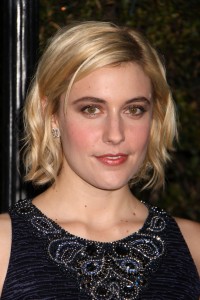 Greta Gerwig is the co-writer and star of the extraordinary film Frances Ha. This black and white film depicts the story of Frances (Greta Gerwig) struggling with friendship, money, identity, and life in New York City. Life is full of ups and downs, and Frances’ life seems to be tumbling down when her best friend, Sophie, decided to leave her and move on to her new life; getting married. During the interview with Gerwig, it seemed like the character of Frances just jumped out from the screen to talk about the movie because Frances’s life is almost parallel to Gerwig’s personal life.

“When we were writing it, both Noah and I were drawing very much from our own experiences we’d had. But it’s like making a cake. I can’t tell you where the milk is or the eggs are. They’re just in there. So, it seems like they get kind of baked into this fictionalized world that we built. You only have the experiences you have and what you know. Even the imaginative work you do is based on something that’s real. But, yeah, definitely, it’s really close to my heart and my experiences. Even though I was never a dancer, I know a lot of dancers. I think there is a way in which that story is very similar to being an actor. Anything you are struggling in and working towards is difficult. “

The film focuses on the platonic relationship between Frances and Sophie. When Sophie reached a turning point in her life, their long friendship changed its shape. Gerwig discusses her point of view on female friendship and her own experiences with her girlfriends.

“I went to an all women’s college. It’s like an incubator for codependent female friendships. There’s no better place to create these bonds. But they were amazing, and I’m still friends with all of them. There were six of us who lived in an apartment (built for three) for two years after college which was a long time. Even after we left that apartment, we were still living in twos. There was three twos, and we got apartments all in the same neighborhood. It took a long time to leave it. I love them so much, and I’m very grateful that I’ve had those friendships. But, I think I was always interested in the moment when you realize that your friends are not your family, which is really painful, I think. Because you sort of believe up to a certain point like, “We’re family. We’re all gonna live together! It’s gonna be awesome.” Then you realize that no, they’re gonna get married and have their own family. You’re going to be a friend, and you’ll see them on their own terms. You won’t share life in the same way anymore. I think that was kind of hard for me to accept, so I understand that.” 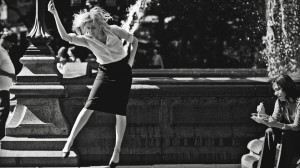 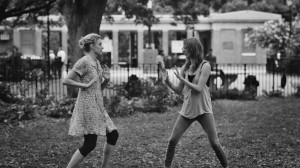