“Horns” star Daniel Radcliffe says about his movie star life: “I think everyone thinks of actors as having relentlessly glamorous social lives, and I don’t” 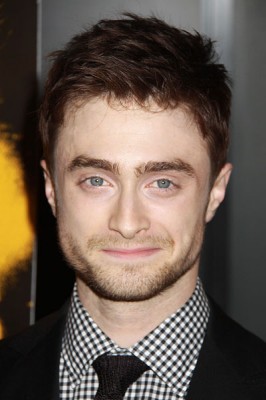 Daniel Radcliffe plays Iggy who grows horns on his forehead in his new movie Horns. What was it like wearing the horns? Heavy? Uncomfortable? Iggy also controls snakes. Yes, he’s a Parseltongue! What was it like working with snakes? Fun or scary? Also does the isolating feeling that Iggy has in this film happen to movie stars? The kid who plays young Iggy looks like Harry Potter! How does Daniel see that?

Don’t miss our video of the Horns star below! 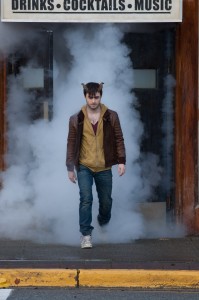 Q: The horns were heavy? Were they difficult to put on? Did they start to feel normal?

They looked really normal and like really quickly. That’s what I thought was remarkable about them. Whenever you see a line in a script like “the character has horns,” you go, “OK, well great.” In my imagination that’s fantastic. But how will it actually look? The first time I saw them on it was a combination of relief, because they looked fantastic, and excitement, because when you have something stuck to your head that can go either way. It has the potential to look silly, and it really doesn’t. The word “organic” is one of my most hated, sort of overused words. “Just make it organic, at least it will look that.” But they do in that they look like they’re made out of organic material and actually coming from my head. They only took like 20 minutes to put on. They were really fast and really light. 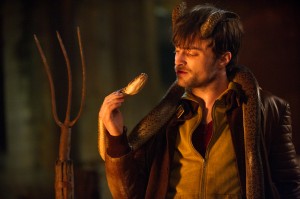 Q: How was working with snakes?

They were fantastic. I didn’t know before doing the movie if I was comfortable with snakes. It turns out I’m extremely comfortable with snakes. I may have been completely projecting human emotions onto this creature, but I became completely convinced that she is very affectionate by the end. They get cold. Snakes aren’t cold-blooded. This is my favorite word I learned on the shoot: they’re poikilothermic, which means they can’t control their body temperature so whatever temperature it is outside, they will be. So they’re freezing and you’re already warm so they just love you and hug you, but in a constricting kind of way. So I really liked them. We had one scene with 100 live snakes, which was awesome. Talk to Max Minghella about snakes. He’s not such a fan. He really, really hates them. 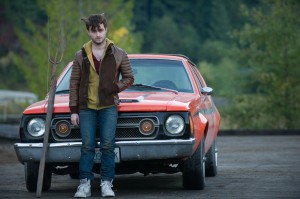 Q: Iggy is the less favored child of his parents. He’s isolated. So being a movie star, I’d imagine you don’t have the experience of feeling isolated or being the least favorite.

That’s the thing, I think everyone thinks of actors as having relentlessly glamorous social lives, and I don’t. I’ve spent very little time in this city. I never want to sit here and be the actor sitting here whining about being famous, but there are elements of it that are isolating. As many opportunities and fantastic things come into your life, there are also things that you have to struggle against. There is a perception that actors are kind of at just one long party all the time, which is not quite the case. 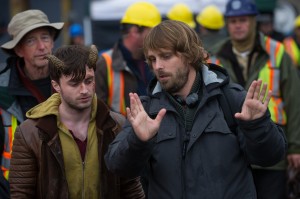 Q: The child actor who plays the young Iggy very much looks like you. What was that experience like?

I didn’t really get to see a lot of what they were doing. I got to spend a lot of time with Mitchell (Kummen) on the move. Mitchell is like I was when I was like 13. He’s a kid. He’s from Winnipeg and he’s like a kid. But he’s incredibly sweet. Mitch is blond naturally, has got much lighter hair than I do, and they dyed his hair on the first day. He went back to his hotel in Vancouver. Nobody knew what he was doing and one of the girls at reception said, “Oh, you look like Harry Potter,” and that made his day. He was so happy! It’s a very hard job on the casting department to cast somebody to play a young me when everybody looks exactly what I looked like when I was that age. And they did, I think, a brilliant job.

In the above video, Daniel Radcliffe delves into how he related to his Horns character and what he really thinks about reporters. Plus, the former Harry Potter chats about his love for the Sharknado films!