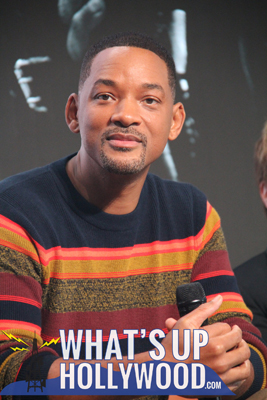 When you consider that Will Smith has been in the entertainment business for over thirty years, won four Grammy awards; one of which was a historic milestone when the Grammy’s finally started to acknowledge rap music.  Yes,  first Grammy in history given for Best Rap Album was won by Smith, then known as the Fresh Prince and his partner DJ Jazzy Jeff for Parents Just Don’t Understand which he recorded before he was even old enough to legally drink. He’s been nominated for the Best Actor Oscar, twice, had Newsweek magazine label him as “the most powerful actor in Hollywood” back in 2007, and is the only actor to have eight consecutive films gross over $100 million in the domestic box office. It is truly remarkable that he remains so approachable and just an all around nice, fun guy.

With over 50 film credits under his belt he ads another with his newest project, Gemini Man where he plays an over-the-hill hit man who faces off against a younger clone of himself, also played by Smith with a little computer generation help.  We hear from the incredible Mr. Smith on  what it was like to play dual roles and recapture a little misspent youth, and how some of his early work helped him create the characters for this film.

Q: What do you think about the computer-generated younger version of yourself?

I think people don’t completely understand the depth of what (the visual effects people) attempted and accomplished here. Junior is not de-aging, right? So it’s not my face and they smoothed out my face to make it look younger. It’s a 100% digital human in the same way that the tiger in The Life of Pi. They used a real tiger to understand the movement, but in the movie when you are seeing the tiger you are seeing a 100% digital recreation of a tiger. This is not me de-aged, it’s a 100% digital interpretation of me, it’s a digital character. It’s the first digital human. So it is actually a spectacular thing to be able to make people feel emotion in that way, capturing the youthful eyes. That’s the one thing for me that was so amazing. It was the hardest part that me and Ang (Lee, director) were talking about, you can’t fake innocence. I was trying to explain in an interview the other day that as a young actor it is easier to play older but older, it’s difficult to impossible to play younger. Once you know some stuff, it’s in your eyes. It’s in your cells once you know some stuff. So, to try to have eyes that un know like sex, once you’ve had sex, you walk different, it’s in your back, you know [laughs]. So their job in creating a digital human was to be able to sell that innocence and that youth and be able to sell a digital human in that way. I think (they) have done spectacular work. 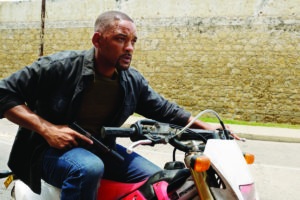 Q: How did you play yourself both as a youth and older?

Well, what was really great that Ang did even before we even met, he had gone through my filmography and grabbed things. He grabbed Fresh Prince, he grabbed Six Degrees of Separation and Bad Boys, Independence Day, Men in Black. He grabbed the scenes and he was sort of walking me though moments. He would look and say “I like very much what you have done in this moment here in Six Degrees of Separation. In Bad Boys, this one was good, but don’t ever do this in my movie” [laughs]. So we sort of created a language from my old characters and the moments what he was trying to capture. It’s funny. There’s a thing before you learn how to act. There’s a powerful thing you have from not knowing and it’s really difficult to recapture that not knowing. We found these moments, we found these really honest moments in some of my early work. But I would say of all the things that was the most difficult part. It almost felt like learning how to do some bad acting, like go back to bad acting. Because there is an honesty before you actually learn where the light is and you learn how to stand and you learn that makes people clap for movie stars in the theater. Letting go of all of that stuff was really difficult. 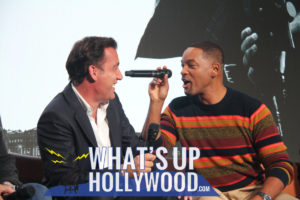 Q: The movie was shot at 120 frames per second. Does that make everything crystal clear?

I was going to say, it’s so clear. So it responds the way really responds to your eye, and that was the attempt to make it a much more realistic experience so much so. It’s so crystal clear that the actors couldn’t wear makeup because when the camera moves in, you could see makeup on our faces. So I had to drink a lot of water. Couldn’t afford a breakout.

Q: You like science fiction so what was the Sci-Fi movie that really hooked you?

Star Wars was the movie when I was growing up that I was stunned sitting after Star Wars ended. I couldn’t believe that they could make me feel like that with a story and with these characters. I think career-wise, the things that I’ve been chasing are Star Wars and  “Thriller” (Michael Jacksons) are the two pieces of entertainment that I’ve always been hoping to make something that matches for others how I felt when I experienced those.

Q: What if we could really clone human beings? If someone died, you could recreate them and wouldn’t have to grieve the loss. How do you feel about that? 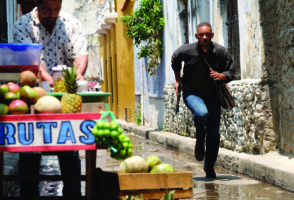 I think we all have the human quest to overcome our pain, right? So, we’re all trying to figure out how to eliminate suffering from our lives and there was an interesting phrase I heard the other day, “poisoned honey”. We reach for poisoned honey a lot in order to overcome our pain and suffering. When I think about cloning and we talked about it a lot on this movie, it’s one of those scientific reaches that I think we’ve already gone down the road so I am sure there are absolutely things have happened in cloning that we don’t know about yet that we’re going to find out. My opining is that cloning will ultimately pan out to be poisoned honey. It will be a reach that will potentially come back and bite humanity in a way that we are probably not considering fully. 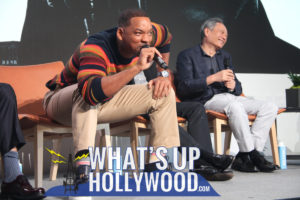 Q: Do you have any advice to your 23-year-old self?

That question came up a lot. My younger self was wildly and insanely aggressive. At 23-years-old, I was naïve and ambitious and aggressive. There is a power to naiveté. There is a power that I’m actually trying to get back in my life right now. I would be asking my 23-year-old self for advice more than trying to do because he made some good-ass decisions. I was like wouldn’t have done it that way but he made some good calls. So, for me, just in the last couple of years I’ve been feeling trapped by the success that I’ve had and the decisions and choices  I’ve been able to make have been smaller, trying to protect Will Smith. So, on my 50th birthday, I was like f*ck it, and I jumped out of a helicopter over the Grand Canyon, trying to get back to that youthful, fearless space. So I would be interviewing him rather than trying to give him advice.