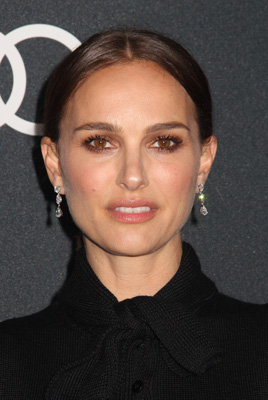 I love Natalie Portman for so many reasons, one of which is that she is the consummate professional. She always shows so much respect for the press and seems to truly understand her role and that being present mentally as much as physically to promote a film matters.  Back when I covered the red carpet for Vox Lux, it was pouring rain and the film distributer had a tiny tent sent up so everyone was soaked. Natalie arrived way ahead of the timeframe typical a-list talent would arrive for a red carpet. She hit the carpet and took her time, stopping for each photographer and posing 5-6 times for each. When she got to the last photographer we realized she had make-up issues. She got it quickly corrected and walked back through the entire row of photographers the same way she did it the first time. On the flip side, when Jude Law arrived he only stop and posed for a few photographers racing through like he had a plane to catch.

Fast forward to this press conference for her new film, Lucy in the Sky, and again Natalie took notice of what everyone needed. She even noticed me trying to shoot around her water bottle and she removed it from the table so I could get a clear shot of her face. She is the BEST! And Natalie isn’t just winning at being a star, she is winning in her new film, Lucy in the Sky about traveling up into the stars.

Portman plays Lucy Cola, a strong woman whose determination and drive as an astronaut take her to space, where she’s deeply moved by the transcendent experience of seeing her life from afar. Back home as Lucy’s world suddenly feels too small, her connection with reality slowly unravels, kind’a like my love for Jude Law, but I digress. (wink wink) 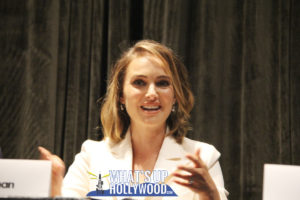 Q: What was the key for understanding the complexity of your character Lucy?

Well, I think it was really about this existential crisis that Noah (Noah Hawley, Director) and I talked about a lot. What happens when you have this experience that makes you feel more alive than ever and have more meaning than ever but part of that experience is really realizing how small we are and how meaningless, perhaps, everything we care about is in the universe. And this relationship that she has with Jon’s (Jon Hamm, played Mark) character is very much about that, where he’s kind of positioning this like, “Nothing really matters let’s just do whatever the hell we want” attitude, which is so tempting to go into. And she’s kind of fighting for meaning. She’s kind of fighting for, “It does matter, I do care, I am feeling something big. Even though all sides point to nothing matters, I want something to matter very badly.” And it’s kind of the most human thing that we can all relate to, even if none of us can actually claim to have been in space.

Q: Having the experience of playing a character with mental health issues in Black Swan and now again in this film, Do you feel that Lucy’s issues were her driving force?

It is absolutely a piece of it, but I think what’s so accurate about Noah’s guiding me through it is that it’s not one thing and that I think is true for most human behavior, like it’s not a simple, “Oh there’s a child with trauma, let’s draw a line to this behavior as an adult.” It’s like there are many things. There’s how her family was when she grew up and sleep deprivation and the return from space and seeing things differently. It’s this issue at work with feeling gender-based discrimination and unfairness, it’s a man who is treating her badly, it’s her grandmother who has been her support dying, there are so many, like every person is a unique constellation of issues, to put it in space talk [laughs] but we are each unique points of specificities and our behavior is a result of all of those complicated things. It’s not one input. So yes, that’s absolutely an element but there is no central element there, it’s just a collection. 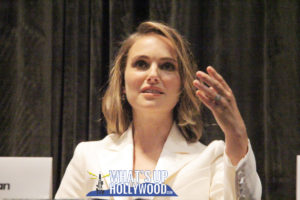 Q: What was your most memorable moment of filming this project?

The bees were really… that was really one of the most magical experiences of my life. Afterwards, I was just like, “Thank you Noah. Thank you so much for this experience.” Because that was so so cool to just be in the middle of it and holding them so close. That was really amazing. And Dan (Dan Stevens, played Lucy’s husband) also brought his telescope every time we shot night shoots and so like between takes we could go look at sometimes the international space station would pass right over and you could see it. Those are magical moments. 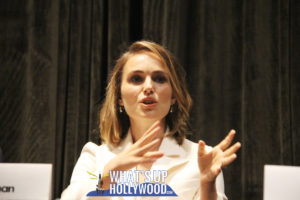 Q: Would you consider this role part of the new feminist wave in Hollywood?

I think that every movie that is about a woman as a complex human being, with her own very specific intentions, flaws, strengths, just showing kind of a complete humanity is feminist. So yes, I think there have been more different kind of representations of women, the more complicated and more they are agents of their own narrative. That’s part of allowing women to be all different kinds of things, not allowing, but showing women how they are, which is a vast, infinite, array of positivity. 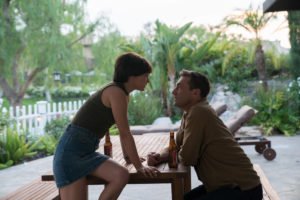 Q: Did you talk to astronauts?

I was lucky enough to visit NASA and talk to some astronauts there during my tour who had been on the space station and they were describing how physically it was so hard to come back. They called it like burning the rubber on their sneakers because it’s hard to feel your feet after being in no gravity, it was like sledging your feet. And then of course there is a whole protocol for psychological well-being because it is really shocking to be there and back – for everybody. And there’s also like quite a lot of vetting that they do of potential astronauts for their social and emotional wellbeing because even being up there is really hard to deal with this small group of people in a confined space for extended periods of time in very sometimes stressful conditions. But you have to be pretty stable to even get the opportunity to go, which makes it even more remarkable that someone could experience such an extreme unravelling after getting through the vetting process. 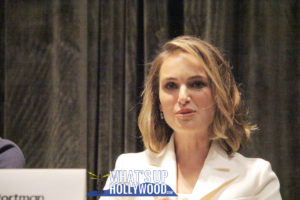 Q: The character reminds me Black Swan because Lucy is also competing for respect, would you agree?

Well unlike the ballet world, the astronaut space world is more of a situation where women are one out of ten players, which in a lot of positions of power women get, a slot, you know, a seat at the table. And when you’re one of a kind, you can be otherized, you can be “the woman”, “Oh you know the one, the woman in the room. Right?” But if there’s more than one you have to pay attention to someone’s personality. You have to say, “Oh you know the one who is more into this specific kind of planetary…’ You know, disposition or whatever.” You have to actually pay attention to some characteristics about the person, their humanity, to describe them if you’re talking about them. You can’t just be like, “Oh the girl”. And I think that there’s a very specific thing about being “the one” in the workplace that is a very different situation.  There’s also the other thing that is interesting about women’s work is that it tends to usually either be one or like a women’s field, like ballet, nursing, teaching like… that’s why the equal pay conversation is super complicated because there’s whole occupations that are only women, or the majority women, and those tend to be lower paid occupations. It’s not equal pay….Anyway, it’s a long conversation [laughs]. I could go on.

Lucy in the Sky is currently playing in theaters nationwide.