“How to be a Latin Lover” screen siblings, Eugenio Derbez and Salma Hayek on fun, family, and Trump’s ridiculous wall 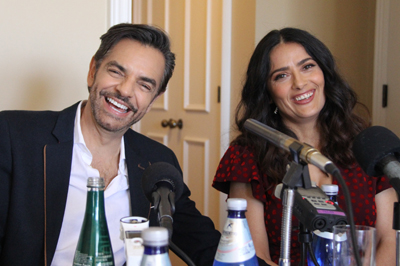 Eugenio Derbez and Salma Hayek played brother and sister in How to be a Latin Lover and  their sibling-hood chemistry in the film is amazing. We chat with the pseudo sibs about the film and the infamous Trump Wall. 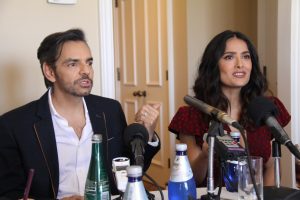 Q: Do you remember when you guys first met?

Salma: I don’t remember how we met. Do you remember?

Eugenio: We were working at the same network.

Samla: And in the same stages, next to each other. 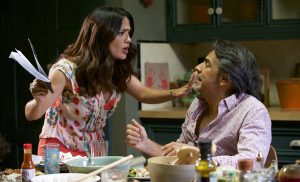 Eugenio: I was in the comedy and she was always in the Telenovelas. We were always meeting in the makeup room. I remember the day we were talking about our birthdays and it was in the makeup area.

Salma: They are not trailers. They are makeup rooms for multiple shows.

Eugenio: So you can meet everyone there from different shows. She was doing a telenovela and I was doing a comedy show.

Q: That’s when you two met each other?

Eugenio: We met like thirty, probably thirty-five years ago. She was a baby.

Q: Salma, how many times did you get to hit him in the film?

Eugenio: All of them.

Eugenio: All of them.

Salma: But you know there is a technique – it’s not like I’m whacking him.

Eugenio: You were. [laughs]

Salma: No. You flip your wrist like this [demonstrating] and you just brush it like that and it goes like this. See? See? It doesn’t hurt.

Q: Salma, do you have a brother?

Salma: I have a brother and I’m Mexican, I have 300 cousins. I remember that and I said to Eugenio, let’s bring back the “Sape” because I really think we can start a trend here. It’s going to be the Sape era.

Eugenio: We use it in Mexico when you are fighting with someone you would say shut up! Sape! 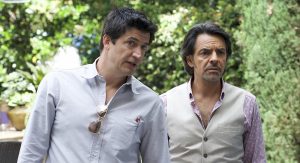 Q: Were you worry about having a white guy direct this movie?

Salma: He was game. Sometimes we would start improvising for a long time and he would get lost. I’ll give it to him, he did not catch on. He’s smart. He saw that the crew was laughing and interested and he would let us go. Then afterwards, he would come a little nervous and say “Okay guys, that was great. What was that?” It was very hard to translate to him because some things if you over translate, they lose some of the (translation).

Eugenio: He didn’t get it. He was like, “What did you say?” And she was like, “We said this, this and this.” “No, no, no, that’s not funny, just stick to the line.” “But no, the line is not funny in Spanish.” So he wrote it in English but in Spanish it was not funny, so we changed it. Then he said that “I have a solution. Let’s keep the Spanish as we know it is going to work and you subtitle the Spanish and put your joke instead.”

Q: You were both so impressive with your dancing and singing, and both hilarious.

Eugenio: That was her idea. When I told her to be part of the movie, she said “OK you know what I like this story because there are always love stories or stories of mother and child or father and son. But no brothers and sisters. There’s just a few. So I like that, but let’s make this more real and authentic.” And then she said “I have an ability of turning any sad song into a salsa.”

Salma: This is for real. This is me, I can do that.

Eugenio: She told me that and I said really? Yeah, any sad song. I said, like what? “El Triste”? Yeah, I can turn any song. So that part of our phone conversation is part of the movie. So she decided to do that.

Q: Did you have a closed set for the pool scene where you wore the speedo?

Eugenio: No. Not a closed set and it was one of the most embarrassing moments of my career. I gained weight, so I felt weird. I kind of felt bloated. Wearing a small tiny yellow speedo was worse. They asked me to take off my robe and I felt so embarrassed because there were a lot of extras and beautiful women around. And then there was Raquel Welch, they said “Raquel Welch is on the set”, it was the first day I met her. I always had a crush on her when I was a kid. I want to meet her but I don’t want to meet her (like this). There’s no time, you got to go on set. So I went on set, took off my robe and I was wearing just the speedo with this big belly and Raquel was on the other side of the pool. I was really embarrassed like “oh my God, Raquel Welch is watching me like this.” I felt like I was naked.  It was really embarrassing.

Salma: You were funny. [laughs] 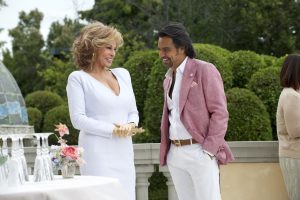 Q: Okay a bit serious now. How do you feel about what is happening in America in regards to immigration and the wall?

Eugenio: I’m really sad about what is going on because our people, all the immigrants that come here, I’m talking about all Latin Americans and not just Mexicans, they are here because they really need to survive. They are not here because they want to steal jobs. They are just trying to survive. Right now a lot of countries in Latin America are in really bad shape. They are running away to have a better life or running away to save their lives. There are some parts of the country in Mexica where the drug lords and Narcos are threatening their lives. So they are trying to survive. Right now they finally made it, they survived crossing the desert, and they made a family here and now they are being torn apart just because of this. It’s heart breaking. I think it’s not fair. I don’t want to go too deep but it breaks my heart.

Salma: Most of these illegal workers are very, very skilled at working as farmers. They’re very, very, very skilled as farmers. They do not want to be farming drugs. In fact, most of the people that come here are people that do not want to have anything to do with drugs. Right now, it’s the easy way to offer their skills for that but they don’t want to do that. So a lot of them came here because there is a lot of work for the farmers here, and there’s not a lot of skill for this work. And there’s a magic thing to it too. Besides that, you actually have to have a skill for it and you have to be so strong. It’s one of the hardest labors. It doesn’t seem like it. But the position, the back – it’s something really, really hard to do – to endure. They have the endurance. They have the skill. And they have something magical that is called (a) green thumb. If you don’t have the right energy with your hands, and everybody knows this, you kill the plants. There are so many gardeners. We work with the plants a lot. There so many medicines we discover with the herbolaria because we are good with the plants. These people have this skill and know the America needs.

The problem with immigration needs to be resolved. There are many ways to resolve it. They would be very happy if they could just come – like there was a time they were doing this with a permit in the time they could do that and go back to Mexico. They don’t want to stay here. These specific workers are really good for the economy of America. And there’s not that many people that want to do it – especially not at that price. If they could work legally, then they would pay the taxes that benefits America. There needs to be an immigration reform. It is really horrible that we’re not spending the time actually working out a good, well planned, well thought out immigration reform. And we’re spending the resources on trying to build a wall that is a waste of time and money. Number of one – it’s billions and billions of dollars. Number two – it’s the most absurd thing because what are you going to do when you hit the river? You’re going to go over the mountain, through the river where there’s going to be dams too? How do you build a wall through the many rivers that cross the border? And then it doesn’t matter. Some people will still get in because there is a wall that some people don’t walk around – they’ll go above the wall, underneath the wall. The amount of time and effort and money that is put into a plan – it’s not only that it’s a wall for it’s terrible, psychological. No…it’s dumb. It’s dumb. What we do actually need is a smart plan. It’s crazy that nobody goes through the practicality and says, “wait a minute, has anyone thought this through?” Somebody just said “I’m going to build a wall”. And guess who is going to build it? The Mexicans.

Q: You are building a bridge with this movie for a lot of people.

Salma: We are proactive in society in many ways. A friend of mine that works here just told me that the movies I worked in have raised/amounted to almost one billion dollars. This is good for the economy. We contribute. One billion dollars is a lot of money that I had a part in. In the film industry it’s one of the strongest economic industries in America. The last three Oscars before this one were won by Mexican directors and the cinematographer, Emmanuel Lubezki.  We contribute a lot to this country in many fields.

How to be a Latin Lover is currently playing in theatres nationwide. For more info visit the film’s official website at, http://tickets.howtobealatinlover.movie/