“Guardians of the Galaxy Vol. 2” star Kurt Russell shares his secret to longevity in Hollywood’s galaxy. 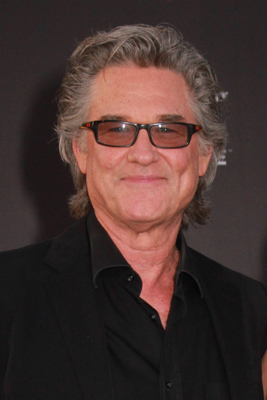 Kurt Russell has been in the game a long time, with 56 films under his belt he remains one of the most respected and liked guys in Hollywood, and I was reminded why when I ran into him in the corridor of where the press junket was held. Not only did he remember a conversation we had over 4 years ago, his playful and positive personality is infectious. And yes ladies, he is still hot.

Q: So what convinced you to do this film? I hear there was some type of initiation process.

You have to bring over some food. Nooo. The truth is that when I read the script I wanted to make sure I was understanding it correctly. I hadn’t seen the first movie because I’m not much of a moviegoer. I knew that everybody loved it, though. I also knew that when I was doing Hateful Eight stuff like this (press conference) and all of a sudden, boom, boom, boom, my phone and the people around me were saying, “Are you going to be Star-Lord’s dad? You’re going to be Peter Quill’s father? Are you going to do Guardians of the Galaxy? And I was like, “Guys, I don’t really know what they’re talking about. I saw the (original) movie and when I saw the movie I immediately started getting it. But I also immediately started wanting to do it. That immediately was followed by, “Everybody loved the first movie. What you don’t want to do is something that’s going to make (the audience) not like the second one,” so you do feel that pressure. So I said, yeah. I told James (Gunn, director & writer) “I don’t want to mess this thing up so I need your help.” 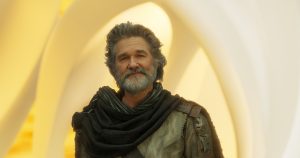 Q: What do you think now that you’ve seen the updated younger version of yourself?

That was pretty interesting. I didn’t really think about that a lot because they’ve got all the trickery in the world. Dennis Liddiard has been my makeup man in 28 movies. Before we went in there—because we assumed it was going to be all CGI—and he said to James (Gunn) and the cinematographer (Henry Braham), “I can young this guy down. I’ve got some tricks in my bag. Would that be helpful?” And they said, “Yeah, as much as you can. That would be great.” I was speaking to the gal last night who does the CGI. She said, “What did you think of what we did?” I said, “I thought it was great but I understand you didn’t do a whole lot.” She said, “No, I didn’t. We touched it up here and there but (Liddiard) did a fantastic job.” He does have a lot of tricks, not just makeup—cosmetics, I should say—but there’s a lot that goes into that, actually. It’s not just what you think. Without giving away things, because I hate giving away tricks, you have to create an impression, not an image. There’s stuff that goes into that. You want them to look certain places and not other places. Then, when you’ve got the help, of modern day abilities with technology, I think it’s a much more natural look.

Q: What’s it like coming back to Disney and now being in this movie?

I do feel I have a special relationship with Disney but the truth of the matter is, everytime you go to work, you’ve got to make the team. It doesn’t make any difference what movie or television show, whatever it is, you have to go in there and, hopefully, make them feel good about the decision they made to hire you. That’s just the way it is. You can’t walk in there and say, “I’ve done a bunch of stuff; you all have seen it, haven’t you? So we’re good, right?” It’s like, so what. You’re only as good as your last (time) at bat. I just wanted to make the team. I wanted to be helpful and I wanted to be good. I was very fortunate that I ran into a team that had a terrific manager (James Gunn). He really knows his world. He also knows how to execute. He has cast these people perfectly. It was going to be hard for me to measure up to that, I knew that (so I) asked him a lot of questions. I drove him a little bit nuts.

Guardians of the Galaxy Vol. 2 opens theaters on May 5th.  For more information visit the film’s official website at, https://marvel.com/guardians