“Guardians of the Galaxy Vol. 2” star Chris Pratt has no problem giving you the shirt off his back. 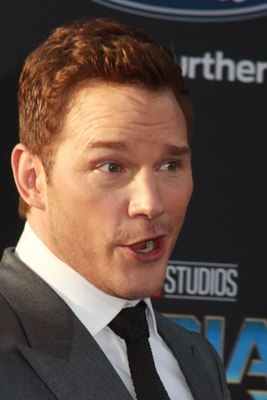 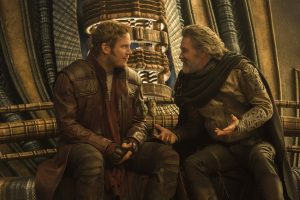 Q: How amazing did it feel to have Kurt Russell play your dad?

You know, there is this thing that happens where you promise yourself you’re not going to do this thing that happens every time you meet someone who’s an icon. Someone who you have known way longer than they have ever know you. You have seen all of their stuff. You have this opportunity from time to time, if you are lucky, to work with someone like a Kurt Russell. You promise yourself you’re not going to do the thing where you geek out. It’s a

little inauthentic if you don’t, because if you just go in there and you’re like “Oh, what is it, Kurt? Nice to meet you. Chris.” I don’t acknowledge the fact that how much I love him and what a fan I am. If you don’t get it out of the way, then it feels a little inauthentic. So I think I did that immediately. It doesn’t really take that long to tell someone that you really love them, you really respect their work. For them to go, “yeah, thanks.” Then that’s it. At that point you move forward and there is this really cool thing that is probably the one thing I would have never imagined looking forward when I first moved to Hollywood, the greatest part of it and biggest secret is you become somebody’s friend and somebody’s peer rather than a fan. That’s really nice. I think Kurt and I have become friends. We’ve connected on a lot of things outside of just the movie. I have his cell phone number and I will give it to each and every one of you. [laughs] 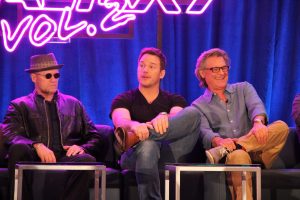 Q: What was your favorite scene in this film?

When you do see the movie, be sure to pay attention to the moment when we see Yondu (played by Michael Rooker) for the first time. It’s in my opinion, a series of wordless pictures that truly that moment to me is when this film transcends the genre. I’m not joking. It sounds like I am doing a bit and I’m really not. We were just talking about this. It’s so beautiful. I want you to come to your own conclusions. Yondu is shirtless, he is essentially naked and really vulnerable. You see he just had sex with these crazy robot prostitutes or something from space. There is this look on his face. He never says a word but you feel his pain, you know that he is hurting inside, you know that he is lonely, you know that he is vulnerable. Then immediately you cut to him walking in fully clothed with his ravagers behind him and his sense of power, but because you saw him naked you know what is going on inside of his mind. That paints the entire arch for Yondu through the whole movie and I was just talking to James (Gunn, director & writer), it’s fucking beautiful man. He doesn’t even say a word. That’s way better than a guy who’s like “I’m going to take my shirt off and snip this one and put this one on, check it out.”

Q: There has been some chatter lately about male actors feeling objectified doing shirtless scenes. What are your thoughts on that? Do you feel it harmful to your career as an actor?

It hasn’t hurt my career. We are objects. It’s true, we are props. You shine a light on us, they paint us up with makeup, they take a camera and point it at us. Half of the time what ruins it is us talking. We are props in a way. As a man I can say that. But I have to be careful because for millennia, women have been objectified in a way that has a pretty horrifying past around it. It is a little bit different, I don’t know if you call it a double standard but I think you have to deal with them separately. Because there is a history of objectification that is a sensitive issue. I can say objectification is good for me because when I turned my body into an object that people liked I got paid a lot of money. [laugh] Now my grandkids are going to go to a great college because of the object. You have to be a little sensitive about that because there are a lot of really great roles and a lot more great roles probably classically written for men than there have been for women. 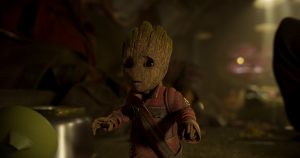 Q: Now being a father yourself, were you able to being any of your personal fatherhood experiences to this role?

I definitely feel I brought not so much in my relationship as a child to a parent but as a parent to a child, I got that more with Baby Groot, I feel like. It’s funny to say Baby Groot, because it’s so adorable and funny. But with the character of Groot who is this vulnerable and lifelike and adorable but also vulnerable little guy, when he climbs up on Quill’s(Chris’ character) lap at the end and asks for the music and I’m listening to the song and I’m reflecting upon the relationship I had with the man who raised me, it’s in that moment I realize that I’ve now entered the chapter of my life where I’m gonna be the man who’s going to be raising somebody, and I’m going to have to make some choices on how I’m gonna be, what I am going to take it would be because that’s how I was raised and what I won’t do because that’s how I was raised. That’s sort of the journey that every parent will take when they have a kid and Quill gets to that by the end of the movie. 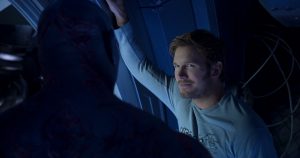 Q: Have you personally ever felt like you didn’t belong? How did you find your family, whatever that means to you?