“I’m clumsy,” “Black or White” star Kevin Costner says about raising girls but he shows a very lovely fatherhood side in this film. We got an exclusive answer about that!

It is a very sensitive subject matter at the center of Black or White but Kevin Costner wanted to tell this story very much and he did a great job! What also impresses me about this film is we can see his fatherhood side. He is really good at dealing with the little girl! The scenes are so lovely!! We included more of his answers (including exclusive quotes!) as well. In the video, Kevin jokes about his Oscar award and discusses the most challenging aspects of preparing for his role in a film that tackles race.

Q: What was it that really appealed to you about this project? 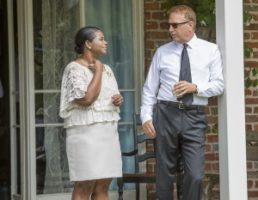 Actors are looking for great parts and we’re asked to open scripts all the time, and the bigger your career gets, the bigger Anthony’s (Mackie) career gets, the more scripts flow to him. It’s the same with Bill (Burr); it’s the same with Octavia (Spencer). And too often when you open a script, it just doesn’t ring the bell. Everybody can write but not everybody can really write a screenplay. It’s an art form. And what happens is some of the films that have really propped up my career all had the same thing in common. On the first page, they started the same in their own little way. This screenplay started like that, and it was just carefully crafted, and I became the movie that you saw. Every page I turned I was surprised. Every page that turned I wished I might have said that. Every page that began to turn I thought, “That’s what I would say,” and sure enough Mike (Binder, director/writer) said it. So it was the magic of a great screenplay and a story, in this instance, of the times we are living in made so much sense to me, and when my heart broke into a thousand pieces on the last page, I knew that this was a movie that I was going to try and have made.

Q: (Exclusive!!) I really enjoyed the scene where you were with your granddaughter in the movie; you have daughters as well, what are the joys of raising girls? 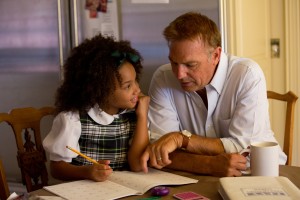 Black or White opens in theaters on January 30th.