“Insurgent” star Shailene Woodley says her on-screen relationship is “grounded in truth and respect and authenticity.” 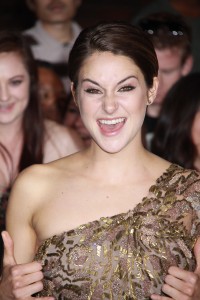 Shailene Woodley again stars in the second adaptation of “The Divergent” series, “Insurgent.” Her character Tris has more action scenes in this film. How did she enjoy that?  And I also asked  Shailene’s thoughts on Tris and Four’s relationship! 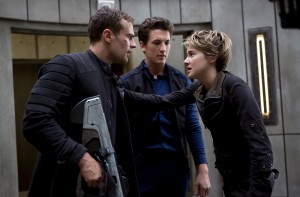 Q: What was it like to get back into Tris, and how do you think she changed? Also, how was training this time?

Getting back into Tris was more difficult than I anticipated, because I didn’t take into account that I, myself, had grown for a year, and I figured getting back into her would be simple because I would just go back into that mindset. My personal mindset had progressed a year in evolution, so I had to go back to who Shailene was a year prior in order to get back into Tris’ mind. In the first movie, we did a lot of choreography and a lot of fight training, and this was more basic sort of fitness. There wasn’t really anything too intense. 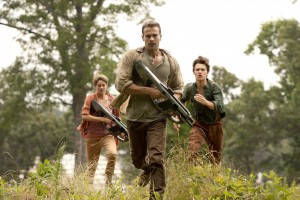 Q: Which action scene made you feel most like a badass?

There’s one really radical scene when Tris is chasing the house and I think one day we had 4 or 5 stunt doubles. There were a bunch of women with short hair in the same exact outfit walking around, it was really funny. But I got to do a lot of, when the house is tilting, we were on wires and would slide down, and there was one where the house was tilted at almost a 90 degree angle and that felt pretty badass because I was like if I don’t grab this pole I’m not going to get hurt but I’m going to be dangling in the air with a pretty bad wedgie [laughs]. So yeah, that was pretty fun.

Q: What is your favorite part about Four and Tris’ relationship? How is it different from other couples?

I’ve said this many times but one of the reasons I fell in love so deeply with “Divergent” originally was the relationship between Tris and Four, because it was grounded in truth and respect and authenticity. And it wasn’t based on surface-level physical attraction or infatuation. It was really Tris and Four equally saw each other as individuals they were inspired by, individuals who they were intrigued by, curious about. There was a sense of mystique about each of them and I find it fascinating and I loved that in “Insurgent” their relationship is rocky, it’s not 100%, it’s not every time they see each other they feel safe and they feel protected and they feel like they’re able to be vulnerable. They put up walls against each other, and that happens in partnerships. Everything has an ebb and flow and I thought that was one of the smartest things Veronica (Roth, Author) could have gifted to the young adult world in a way because yes, there are lots of books that do that as well, but to have that involved with an action film or with an action series is quite rare I found, and I just think it’s great to have a platform for not only adults, but everyone, to recognize that relationships can be based in truth and be vulnerable and at the same time when your walls go up just to recognize that you’re keeping somebody at arm’s length because of your own defenses, not because of anything that they are doing. That’s all defense mechanisms are, is an ability to protect our own inner vulnerabilities.