“Into the Storm” star Sarah Wayne Callies says, “I wept I was so happy for him the day he came out,” about ex-costar Wentworth Miller 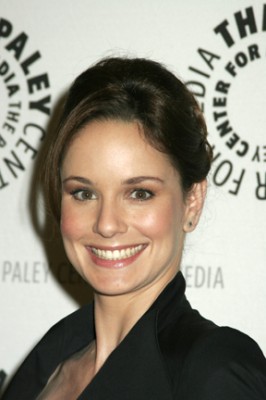 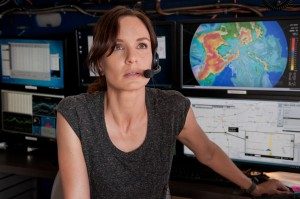 Prison Break and The Walking Dead alumnus Sarah Wayne Callies plays Allison, a PhD meteorologist and super smart woman who is also the mother of a young daughter named Grace. It was surprising to discover that the child actor who plays Grace is Sarah’s real-life daughter. So this film is the first time the mother and daughter have worked together. How did that happen? And we found out that Sarah’s audition tape for this film was shot by a very special person. Also, Sarah revealed that she is very proud of her ex-costar Wentworth Miller who came out of the closet.

Q: How did this project come together for you?

I did the traditional route of auditioning. I was doing The Walking Dead at the time and we were just filming my last scenes. And this project came up and we were in the awkward position of not allowing anybody to know about it. So we were trying to find a way of keeping this secret but still being involved in this project because we thought it was very cool. So Melissa McBride actually, who plays Carol on The Walking Dead, taped me in her trailer [laughs] and we sent the audition in. I sort of jokingly said something about like, “If I get this, I’m going to get you a bottle of wine.” I saw her last week at Comic-Con, she’s like, “Where’s my wine?” [Laughs] So I’m going to send her a nice bottle of wine soon. Then I was in the interesting position of having to lie to everybody on the set because of course you get there and they’re like, “Oh my God! Is Lori dead?” I was like, “No, there’s like a three episode hiatus for me and we’re all taking time off this season.” Then the episode aired and I got a lot of phone calls from people going, “You lied to me.” “I didn’t lie to you. I’m an actor.” 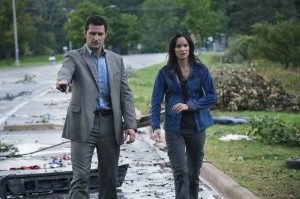 Q: The scene where you are hanging from the truck, how was that shot and was that you?

That’s me. The one thing they didn’t let me do was hit the pavement. That was the one thing. And I was up for it but the insurance company just stepped in. “You’re not dropping your actress 30 feet.” That was so much fun. I studied aerial arts in grad school. I did three years of trapeze training. At a certain point, if I had been good enough, I probably would have run away and joined Cirque du Soleil. So this is my shot to kind of do that kind of thing. It’s surprising how technical the work was. There were some very specific things about what parts of your body to move to sell the action and things. And I watched the stunt woman rehearse and rehearse and rehearse and we worked on it for a long time. But I mean, it just makes you feel like a kid. You’re on a playground and you’re flying through the air and that’s your job for a day. It was a ball. It was absolutely a ball. Richard (Armitage) was great about it too because his experience from The Hobbit movies of that kind of prosthetic and wire work and all the effects and stuff. He’s such a pro. He really, literally, held my hand [laughs] in that scene and was lovely about it. 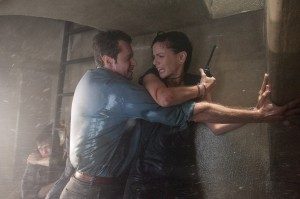 Q: How realistic did they make it on set in terms of wind machines and rain?

The first time they turned the 100 mile an hour fan on me, it blew me 20 feet off my mark. And the cameraman, he’s like, “You’re supposed to be there.” I was like, “I tried. I aimed for that and I vectored off.” It’s a really fun experience and it’s exhausting but I’m also very grateful to Steve (Quale, director) for it because without that, you suffer the indignities of trying to act a tornado. That’s not going to work. What are you going to do? It’s never going to be good.

Q: Any kind of injuries?

I went down hard in the middle of one scene and nobody noticed [laughs]. Evacuating the school, there was maybe like 500 extras, the rain, and the sirens, and it was just a wet leaf. I put my foot on it and we went “Whing.” And I went down. I fall straight out of frame. It looks like I just walked off a cliff. And Todd Garner (producer), bless him, was the only one that noticed. Everybody came up. They’re like, “Good job, everybody. Back to one.” And I was like, “I’m good, I’m good, I’m good.” Steven was like, “Good job.” Todd comes running up. He’s like, “Are you all right?” I was like, “I’m fine,” and I look down and my pants are split and there’s blood coming out. I’m like, “Now I need new pants.” It’s a movie. You change your pants, you put a band aid on and you shoot it again 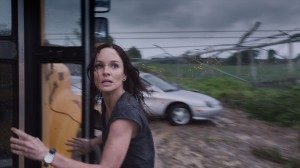 Q: As a mom in real life and on screen, what’s been the most surprising discovery for you about being a mom?

Part of what I liked about this role is she’s a working mom and I haven’t done that before as a character. And it’s something I really relate to, that constant feeling that you are either letting down your family or your career, that you are trying to achieve excellence in both worlds. You’re trying to raise creative, courageous kids and sometimes those kids are not going to see you for weeks at a time. Every working mom I know is sort of constantly walking some kind of a tightrope of guilt. So that was one of the biggest discoveries for me and it was what kind of drew me to playing this character because it’s a place to explore that. And that’s very central to what’s going on for Allison, the sense that this is an opportunity of a lifetime to be a part of this group of storm chasers to try and find this research, to do what we can to sort of enter intelligently into the climate conversation. But it means that every night, you’re Skyping a little kid, going, “I wish you were here,” and going, “Yeah, I wish I was there too.” I don’t think it’s going to change. But I also think it’s worthwhile to model for my children a balance between your devotion to your family and your commitment to your career. 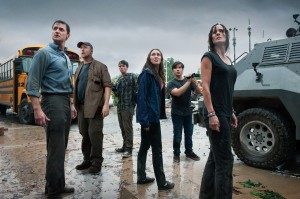 Q: Did you bring your family to the set?

The actress who plays my daughter is actually my daughter. So yeah, she was there. And she will continue to be an actress over my dead body [laughs]. But she wanted to do it and so I put her through her paces. We’ve got different last names. She auditioned all by herself. Nobody knew who she was. She got the part all by herself. She showed up on set and they were like, “Wait! Okay.” It was great working with her. It was a lot of fun. But my mother’s protective instincts want to make sure that she does something respectable with her life like work in a factory or collect garbage — like anything other than act for a living.

Q: Do you still keep in touch with Wentworth Miller?

We’ve lost touch over the years, I think. I don’t live in Los Angeles anymore so it’s difficult. But I’ve kept tabs on him and I think he’s done some brilliant work with his writing career. I wept I was so happy for him the day he came out. That was something that requires a tremendous amount of courage. I am so proud of him. I’m happy for him. That’s got to be one heck of a struggle to go from being the guy on the cover of everything, this enormous international sex symbol, to having the courage to stand up and say, “This is who I am and this is who I’m going to be and I’m going to be that publically.” I think the courage of that example probably saved more than a few lives for young men and young women around the world. And I’m proud to have worked with him.

I just finished a movie in India called The Other Side of the Door that’s one of the coolest creative experiences I’ve ever had. Acting-wise, I ran off of the set and I did a play at the Kennedy Center for a couple of months and that was good fun. Then I’ve been writing. I’ve got two screenplays in development, one actually with Gale Anne Hurd. We had such a great time together on The Walking Dead that I wanted to sort of keep the band together. So again, as a working mom, I can write from home, so try to find a balance between the work away and the work off camera. 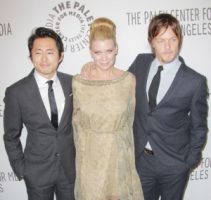 Q: Have you kept up with your former TV family?

They’re some of my closest friends actually. We were all together at Comic-Con which was a trip. Jon (Bernthal) was there promoting Fury which looks amazing and I was there for this and they were there for The Walking Dead extravaganza. We all got together and had dinner and there’s a lot of love there. I see Norman (Reedus) quite a bit and Andy’s family and my family are really close. I think those are ones that will hopefully last for quite a while. They’re good people.

Into the Storm opens August 8th in theaters.