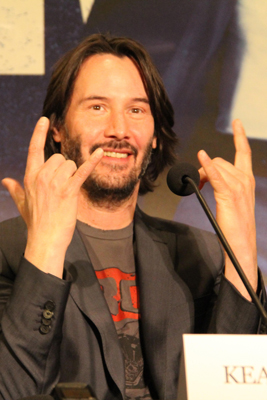 Prior to the release of the original John Wick,  The Matrix series fans around the world weren’t sure what to expect. Could Keanu Reeves bring us someone more badass than Neo? In fact there were thousands of articles and blogs pitting Wick vs. Neo and who would win a battle between the two. After the film was released I for one was convinced Wick would squash Neo, but wished Reeves would make a sequel just so I could be sure. Now here we are with John Wick: Chapter 2 and Laurence Fishburn joins the fun creating The Matrix reunion this time around. So the winner? All of us.

In this sequel, there are more gun, more fights, and non-stop judo/Jiujitsu’s Flying mare. Film creators also tip their hat to The Matrix with a Keanu Reeves and Laurence Fishburne scene with familiar lines of reference from The Matrix!  Move over Bennifer and Brangelina…we now have Wicktrix. Hmmm…Maybe I should patent that.

Needless to say at the press conference I could not resist asking both actors about the reunion of Neo and Morpheus. We also chat with Keanu on his martial arts training who gets a glowing recommendation from co-star, Common. 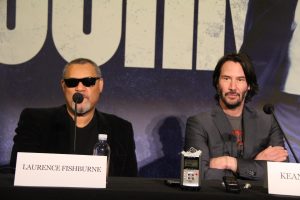 Q: What was it like to collaborate with each other again?

What did I say when I saw you [to Fishburne]? I said, “How did you like John Wick?”

Q: You have many action films under your belt. In real life, do you practice jiu-jitsu or Judo?

I don’t know any real jiu-jitsu or Judo, or anything. I do movie kung-Fu. But with that, you can fake a punch, but you can’t really fake a judo throw. You can get help from the person you’re throwing, because they can kind of launch themselves.

[Common inserts] As far as I’m concerned, the real world (Keanu) can kick ass because he just has it. I know we’re doing it for a film but you can feel the strength and some of that doesn’t feel like film work. It’s like, “This dude is throwing this blow. You’d better be ready to move or it’s going to connect.” I know as Keanu was saying he wouldn’t want to be in any type of MMA competition or UFC but I definitely know he’s the warrior we see John Wick as.

Thank you, Common. Also at the same time, Common got really good at throwing people, me, too. It’s really cooperation, but in the real world I don’t do any of that.

Q: I’ve heard you discuss the choreography of fight scenes and their difficulty,  what was your favorite scene versus what was the most difficult?

The most difficult can become the most fun. All of the action is difficult, and all of it is a lot of fun. Like after when Common hit me with the car we had that little impromptu gunfight. We cooked that up there. I think the Cassian (Common’s character) /John fight before we crash into the Continental, (which) was the most difficult fight technically because we didn’t have all the jiu-jitsu experience, it had the guns, and it we had to go through that process of just learning how to walk. Then we were training after we were fighting other fights, so you see that one had the longest tail.

Also when you look at it, it has got a real combustion and entertainment to it. That Cassian/John fight in Philadelphia, that isn’t so bad. The intimacy of it, Chad also cut out the audio the soundtrack of the music, mano y mano. That was part of the development of the fight. In that fight, you [to Common] were choking me and dragging me backwards and I’m trying to do a reload. Also you have to understand (that this is) cooperation. Like how you called it a dance, it’s a partnership. You really can’t do it without the other person. You have to cooperate.

Q: I lost count just how many people were killed in the first John Wick, but only one dog died and people lost their mind. Some fans even said that was the worst death in the movie. What is your reaction to that?

[Yelling] “I love the movie, and then I can’t watch! Then I can watch it and you can do whatever you want and I’ll love it after that,” seemed to be the reaction people had, responding to the film. They were really affected by what happens to the dog and with John. I get it, and in the second one that was the thing, “I can’t wait to see the movie, you don’t kill another dog do you?” We don’t. There are a couple of them. In this film, we have a dog, he doesn’t have a name. (The puppy in the first film is)  integral to the story, because it’s part of what’s going in his life. It’s symbolic, the thought and love that his wife gave him. Now, he’s responsible for the beast and so they have a little journey together, it sounded like a man and dog road movie.

Q: So the third John Wick movie could be about John and his dog. Like a badass version of Benji.

For locations and show times, visit the film’s official website at, http://www.johnwick.movie/