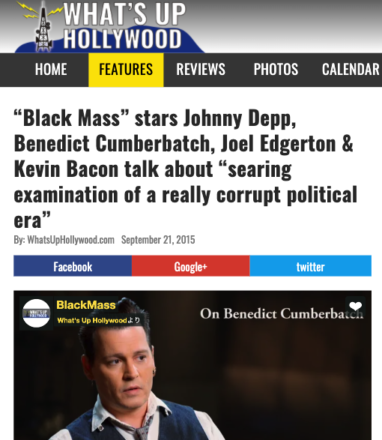 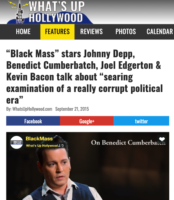 In his latest film, Black Mass, Johnny Depp steps into the shoes of notorious mobster Whitey Bulger, and the star shares his love for his co-stars in this WhatsUpHollywood.com video.    » Read More 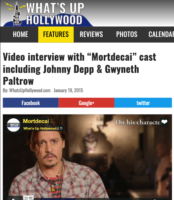 The latest film featuring an eccentric character from Johnny Depp arrives with Mortdecai, which also stars Gwyneth Paltrow, Ewan McGregor, Olivia Munn and Paul Bettany. The cast shares their thoughts with us in this WhatsUpHollywood.com video about the comedy action flick with Depp going into depth about his aristocratic yet low on funds character.    » Read More 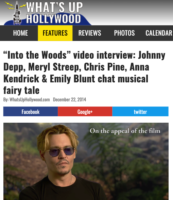 Into the Woods, based on the Stephen Sondheim musical, hits theaters on Christmas Day, and the superstar cast chats about their fantastical film. Besides Meryl Streep’s insight into playing the evil witch and her journey, Emily Blunt discusses her character of the baker’s wife in the fairy tale mash-up.    » Read More 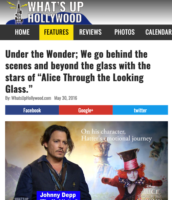 Under the Wonder; We go behind the scenes and beyond the glass with the stars of “Alice Through the Looking Glass.”

After slipping through a mirror, Alice (Mia Wasikowska) finds herself back in Wonderland with the White Queen (Anne Hathaway), the Cheshire Cat, the White Rabbit, Tweedledee and Tweedledum.    » Read More